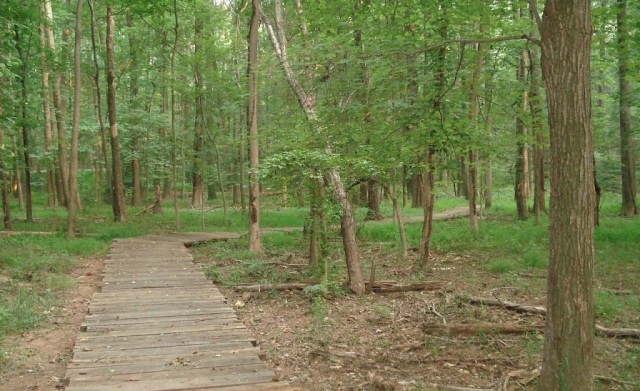 I went to the woods to feed my soul; to gain back energy drained by a fast-paced life; to feel something other than cement beneath my feet. I found what I was looking for at Greenbelt Park. It was a massage for the senses, an elixir for the mind, a balm for the body. Greenbelt Park offers the sights of tall trees on a hot summer day, beams of sunlight straight off a prayer card, and melodies of birds for my ears only. It’s definitely not for those seeking an overly technical and mountainous trail experience, but it fills a need to experience the road less traveled with less traveling.

To most city dwellers within the boundary stones of Washington, D.C., Greenbelt is just the northern terminus of the Metro’s Green Line. The area has the unique distinction of being one of three New Deal-era planned communities, intended to be self-sustaining and affordable. The original town, commonly known as “Old Greenbelt” these days, boasts a network of paved paths connecting residents to neighborhoods and playgrounds and a downtown area of art deco-styled restaurants, a grocery store and even a movie theater. The vast acreage of “green” belting the town was purchased by the National Park Service in the 1950s and renamed Greenbelt Park. Although this park is nestled between two major highways and surrounded by high-rise buildings and business complexes, it offers a peaceful respite from city life.

It was that very city life with buzzing smart phones, humming computers and blaring car horns that I left in my rearview mirror as I drove down the Baltimore Washington Parkway to the park’s entrance. Ten minutes later, the sounds of the District had melted into the sweet soundtrack of summers in my youth. Leaves swaying with a gentle breeze, birds chirping from their high perches, and a chorus of cicadas hidden in the landscape. I chose a parking lot called Sweetgum and started my run along the white-blazed Azalea trail. Dappled sunlight on the forest floor reveals a mixed growth of grasses and ferns, nettles, wildflowers and berry bushes. The designated Azalea nature walk trail has rocky patches and is littered with roots and branches. Different stations of a fitness course dot the side of the trail.

Long before the fitness course or the parking lots, the Algonquin Indians lived and hunted on the land. Settlers who converted the forests into farmland pushed the Algonquians off the land. For decades, farming eroded the once lush forests and wildlife. Since its purchase of Greenbelt Park, the National Park Service has been working to restore density and balance. The efforts of the Park Service are evident in the evergreen and deciduous cultivation of the park.

As I continue, I meet up with the yellow-blazed Perimeter trail. Around a bend, I encounter my first other runners of the day, two young women from Washington, DC. Erica Baca grew up in Old Greenbelt and although her travels took her around the world, she ended up in the District and still finds peace hidden in the Greenbelt woods.

Erica’s words strike at the very heart of my own feelings. Cyclists use the park’s paved bike path but are prohibited from the trails. The Prince George’s Running Club meets in the park on Saturday mornings at 8, but Erica and Audrey are the only other runners I encounter during my run.

Audrey likes the peace and quiet. “It’s a short drive and a nice change of pace from DC options,” she said. “You can leave the city without committing to a whole day of travel and trails.”

I leave Audrey and Erica and head uphill to see where the trail takes me. Erica mentioned a smaller park called Greenbelt Lake, which connects to Greenbelt Park via an old telegraph road on the park’s perimeter. I stay on the trail to Good Luck Road, following Erica’s directions. The low rumble of thunder threatens in the distance. But the sun shines, the breeze blows, the birds twitter. Thunder turns out to be the highway.

I turn onto the sidewalk of Hanover Parkway until Greenbelt Road, enter into a neighborhood trail off Lakecrest Road that takes me to Greenbelt Lake, and immediately I recognize that I have stumbled across another Greenbelt gem. The lake is 1.25 miles around, with a wide crushed gravel path begging for mile repeats.

On one shore of the lake, I encounter a playground, bathrooms and a water foundation. I’m already picturing my next Workout Wednesday in this setting as I return to Greenbelt Road and enter back into Greenbelt Park. Back at the Sweetgum parking lot, I take advantage of a large field to run some strides and drills. An empty playground with swings sits behind the bathroom and water foundation. Even in these woods, with their sense of remoteness, suburbia lingers.

I return to my car and start back to DC, energized. The uphills were just long enough to make me feel challenged and the downhills were gentle on the knees. My own meandering route took me on several of the park’s marked trails. Shorter runs in the three- to four-mile range include the Blueberry (blazed in blue) and Azalea (blazed in white) trails. For a six-mile route, try the Perimeter Trail (blazed in yellow) or the Edmonton Road Trail (paved). The longest marked path is the Good Luck Road path, which is about eight miles.

Next time the digital life encroaches upon your peace, toss your sneakers in the car and head down Route 295 or Route 201 to Greenbelt Park. Follow the signs to the area’s best-kept secret. There will always be room for you.

This article originally appeared in the November/December 2013 issue of RunWashington.