In a moment, Ava Gordon knew something was wrong.

While training over the summer, she took a breath and realized things weren’t quite right, which lead to a positive COVID-19 test and a few weeks off of running while she recovered.

In another moment, she knew things would be alright. That was while she was trailing Herndon’s Gillian Bushee in the second half of the Third Battle Invitational. She felt raindrops, and knew her fortunes were turning.

“I just love running in the rain, and I started feeling really good,” Gordon said. “I figured out I had COVID because I could only run about 10:00 pace.”

END_OF_DOCUMENT_TOKEN_TO_BE_REPLACED

This Thanksgiving be part of a time-honored DC tradition — SOME’s 20th Annual Thanksgiving Day Trot for Hunger 5k. This year, to keep our mission moving during coronavirus concerns, we invite you to join us either in person or virtually: 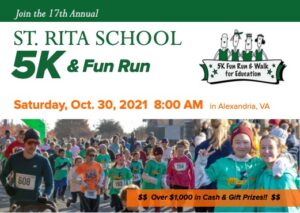 This year’s course will take you through the Potomac Yard neighborhood, with a start line just steps away from Braddock Rd. Metro station

Thais Rolly, Gillian Bushee and Anna Macon Corcoran were content to cruise along during the Glory Days Invitational, working together to push the pace and covering ground.

Then the ground got involved.

END_OF_DOCUMENT_TOKEN_TO_BE_REPLACED

It may have taken nearly 18 months, but marathon runners are returning to Boston this weekend for the delayed 125th Boston Marathon, including upwards of 417 local runners.

The elite field will include two locals and three others who have been among RunWashington’s Trials Fever marathoners who ran in the 2020 Olympic Marathon Trials and have ties to D.C. area. Woodbridge native Alex Taylor, University of Maryland alumnus Patrick Reaves and Howard County native Brian Harvey are in the men’s elite field Reston’s Susanna Sullivan, fresh off a 1:10:50 half marathon in late September looks to lead the local women, with Alexandria’s Bethany Sachtleben and Arlington’s Nina Zarina also in the race

“I’ve always wanted to run Boston, and I wanted to do it when I could be part of the elite field. I just didn’t think it would happen so soon,” Sullivan said. “It’s not nessarily a PR course, but I think with my fitness right now, it’s realistic to expect that if I execute well, I should PR.”

Sullivan had considered the New York City Marathon, but thought an early November race would extend her season beyond her comfort level.

“I was eager to get going this spring, so I’ve been training for a while,” she said.

And running for a while. In her previous marathon buildups, she had only recorded two 100-mile weeks. This time, she’s done at least eight.

“I’ve been racing on somewhat-tired legs all year, so I’m not sure how to approach my taper,” she said. “I thrive when I stick to a routine.”

Here’s who else is registered for Boston, though not everyone will race:

In her first full season of high school cross country racing, Grace Finnegan is trying to balance her early success with recognition that she still has a lot to learn.

After a few open races during her freshman year at Richard Montgomery, she’s facing new runners every week and trying to pick up tips and process each experience.

“I was trying to read everyone else’s energy,” she said. “It’s a skill I’m still learning.”

She figured it out at the Octoberfest Invitational at Great Meadow, running 17:59 to win over Herndon junior Gillian Bushee (18:14) and hit her first sub-18 cross country 5k.