But that was last year.

END_OF_DOCUMENT_TOKEN_TO_BE_REPLACED 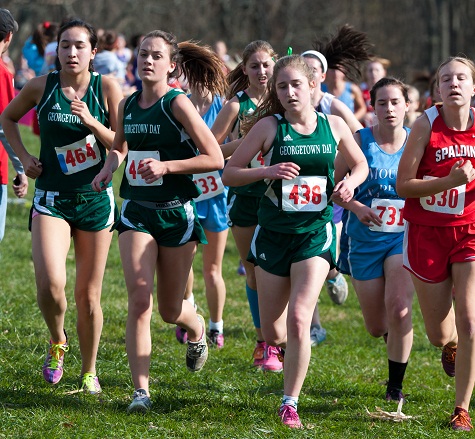 Runners at the Georgetown Day School have long been passionate about the sport, but their results in races did not always reflect their dedication and effort.

That little school in Tenleytown without a track achieved what dozens of alumni had hoped for, and the runners surprised themselves in the process. At the Maryland/DC Private School Championships in Derwood, Md.  Nov. 10, coach Anthony Belber rounded up his harriers and congratulated them on jobs well done.[button-red url=”http://www.mcrrc.org/mddc-private-school-cross-country-championship” target=”_self” position=”left”] Results [/button-red]

Just how well, he wasn’t sure. “You can never really know how you stack up with other teams while the race is going on,” he said. “We heard the girls results–they announced the top three. Third place-Georgetown…”

Georgetown Visitation, that is. “We thought that was going to be us,” he said.

His girls team had finished sixth in 2011, a high water mark, and they all had high hopes for a podium finish. Second place was National Cathedral, a team the Hoppers had never beaten. Then the surprise, Georgetown Day School. Number one. A seven-point lead over National Cathedral. Freshman Katherine Treanor led the way in fifth place.

The boys also scored a victory, a jump from their program-best fourth place finish last year, thanks to top 10 performances from Griffin Colaizzi (sixth) and Aidan Pillard (10th). They scored a 69-90 win over Our Lady of Good Counsel.

“For a long time we’ve had runners who work hard and love the sport, but we just haven’t had the numbers,” Belber said. 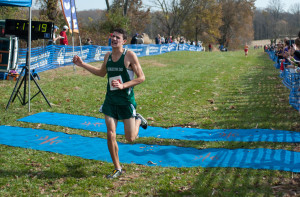 He has them now, with the team’s success doing a lot of the recruiting from the student body. Of the 250 boys at the school, 30 ran cross country this year. They won their third conference MAAC title this year, which Belber said added to their confidence.

“They had a kind of swagger that wasn’t overconfident, but that they were comfortable with what they could do,” he said.

This year, the Hoppers had 11 boys under 18 minutes, and five under 17:01 at different points in the season. It’s depth the team has never had. Though the Hoppers boasted individual star Ben Stern in the early 2000s, one runner could only do so much when five score.

On the girls’ team, with 26 runners, Belber said some of the best contributions came from senior girls who, despite making way for younger runners, continued to be active with the team. “They made the difference,” Belber said. “They set the routines for the other girls, the little things that make the difference– how to eat right, how to train over the summer when they have a lot going on.”

GDS alumnus Peter Silverman has followed the Hoppers closely, and can put his finger on the team’s breakthrough.

“While the men’s and women’s teams  winning in the same year is a result of the talent and hard work of the runners, it’s also the direct result of coach Belber’s tireless efforts to develop a culture of hard work, camaraderie and excellence,” he said.