But for some more fortuitous scheduling, Lake Braddock’s boys may have had “throwback Thursday” on their hands. A throwback to something none of the Bruins were alive to remember.

So they settled for a #sometimeagoSaturday. But that’s all the settling they did.

With an individual title by senior Alex Corbett and a dominating team victory, they put their names in the state championship history books as winners for the first time since 1987, when Brad Baker got the scoring started with one point, en route to a 48-60 win over Woodbridge.

[button-red url=”http://www.runhigh.com/2014RESULTS/R111414AA.html” target=”_self” position=”left”] Results [/button-red]The Bruins had finished a close second, 87-85, to Chantilly last year, in a 6A class team competition that saw four teams separated by four points. It wasn’t even close this year at Great Meadows, as they gapped West Springfield 41-92, placing three runners in the top seven, led by Corbett and Kevin Monogue sweeping the top two spots.

“I just wanted to be patient during the race,” he said. “I knew it would go out fast because of all the other guys out there.”

Coming in off a North Region championship and a strong senior season, with a 15:17 5k PR set in September at the DCXC Invitational, Corbett was confident his plan would play out to his liking.

Monogue’s 15:19 was a PR, and put him five seconds ahead of Stoney’s winning time last year.

“I think I was able to go out faster than last year and keep it going longer,” he said. “I think I was faster in all stages of the race.”

“It’s nice when your teammate is the one making the move, and you know what he’s going to do,” coach Mike Mangan said. “It gives you a great advantage. The pack moved, he held on that was enough to get him into position.”

When Schaefer moved to Northern Virginia from Nevada over the summer and joined the Bruins’ cross country team, he was introduced to a team on a mission.

“My first time meeting the guys was in July and they were running a hard workout,” he said. “They all crushed me. Really really badly. I knew these people meant business. It’s been great training with them — they’re the best in the state.”

The Bruins will see how they stack up against the rest of the Southeast and possibly the nation when they take a shot at qualifying for the Nike Cross National meet in Oregon. Mangan is used to taking runners to the Footlocker Cross Country Championships after several successful years with now-graduated girls.

“I guess I don’t get to take my December trip to San Diego this year,” he quipped.

While Lake Braddock had a year to stew over their two-point loss, their pursuers had been waiting even longer for a shot at the state title. West Springfield sent a boys’ team to the state meet for the first time since 2006, and did it in style, finishing second.

Coach Chris Pellegrini explained that his team, while not flashy, got the job done.

“This is going to sound like it’s not complimentary, but it is– I don’t believe that we have a bunch of blue chip individuals on our team,” he said, “Our one blue chipper (Owen Buck) moved to Seattle, over the summer, so our guys did a great job of rallying together.”

Pellegrini gave a great deal of credit to junior Andrew Lackey (27th), the only underclassman in the bunch, who was running his first season of cross country after a playing in the marching band.

“He was running 11:30 for two miles last year in JV track, today just ran 16:22 for 5k to finish in the top 30,” Pellegrini said. “He’s small, he’s skeletal, he looks like he can’t be fast, and he can’t sprint, but he can just will himself. Something clicked in his brain and he decided he was going to do that.”

“When he caught up to me and said it was time to go, I knew he was right,” Fabish said, as Lackey came running over to the group carrying a t-shirt and yelling “I can run all day!”

Lackey deferred to his teammates when he explained his motivation.

“These guys, the seniors, have been working at this for a while,” he said. “I just wanted to help them get here.”

“He’s the ‘how is he doing this, how is he running that fast’ kind of kid that a program needs to get over the top,” Pellegrini said.

In the 5A race, Thomas Jefferson was the top local team in second, behind sophomore Saurav Velleleth‘s ninth place finish in 16:12. Heritage senior Joey Lightbody was the top local 4A runner in 34th place (16:57). 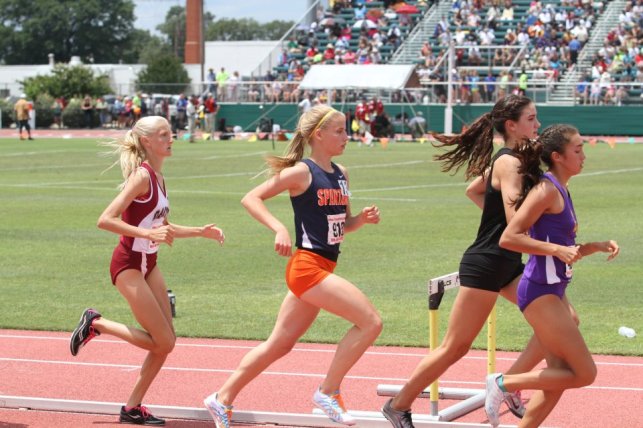