Search
News, Off the Beaten Path

Little Bennett Regional Park in Clarksburg is the largest park in Montgomery County, encompassing over 3,700 acres of Maryland wilderness. The good news for runners is that this green space also boasts approximately 25 miles of trails, all of which have natural surfaces. Countless loops and out-and-backs make Little Bennett the perfect place to get lost on a weekend when trail running is on your schedule.

In addition, you won’t have to compete with mountain bikers, because they’re not permitted on any of these trails. Horseback riders, however, do frequent some parts of the park, so it’s best to use caution when approaching.

The loop outlined below provides a small sampling of what the park has to offer, including thick wooded forests, brilliant meadows, vibrant streams and boggy wetlands.

END_OF_DOCUMENT_TOKEN_TO_BE_REPLACED

0 Comments
Off the Beaten Path 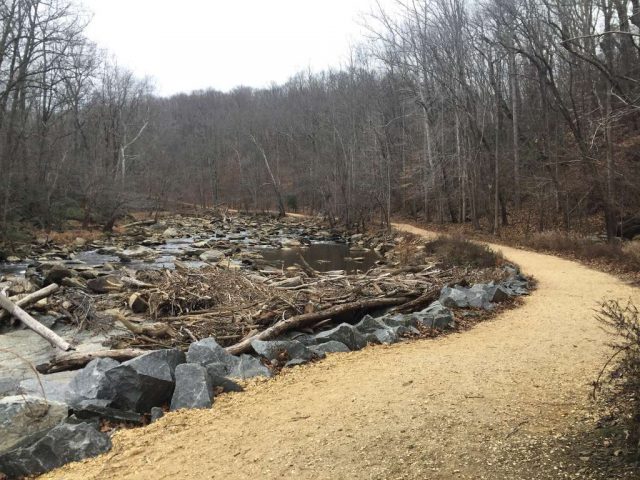 First, let’s get one thing straight — although there are numerous hills that make this run strenuous at times, Difficult Run is actually named after the tributary stream, or run, that runs for nearly 16 miles through Fairfax County, eventually ending at the Potomac River approximately two miles south of Great Falls.

END_OF_DOCUMENT_TOKEN_TO_BE_REPLACED

When she toed the line at the Nike Cross Nationals (NXN) Southeast Regional Championship in Cary, North Carolina in November,  Nora McUmber, a junior from Bethesda-Chevy Chase High School, had never broken 18 minutes in a cross country 5k race before. She had run a great season, no doubt about it, but she was disappointed in her second place performance 3 weeks earlier in the Girls’ 4A race at the Maryland state meet.

Now, at the regional qualifier, Nora had to contest some of the best runners from 12 states. Only the top two teams and the top five individuals not on those teams would advance to nationals. Naturally, the runner-up from Maryland had her work cut out for her.

[button-red url=”http://www.runwashington.com/2013/12/16/runwashington-high-school-cross-country-team/” target=”_self” position=”left”]More of the All-RunWashington team[/button-red]After running a conservative first mile, which found her in about 15th place, Nora began to slowly move up in position. By mile two, Nora was in 12th. About a quarter of a mile later, she took advantage of a downhill section of the race before, as she recalled, “I ran for my life” up one of the course’s final inclines. There was no looking back. Not only did McUmber come out on top, by an impressive 14 seconds, she crushed the 18 minute barrier. Her time was 17:34.

“I know Nora was blown away by the result on Saturday,” said her coach Chad Young. “We talked about going out a little quicker to maintain contact with the top group in the race and to just stay in contention. Her aggressiveness on Saturday really paid off.”

“She surprised a lot of people, herself included.”

One week later, at the national championship in Portland, Oregon, Nora placed 48th in 18:22.8.

“It was such an amazing experience,” Nora said of the race weekend.

“I think the trip to compete at NXN was a great way for Nora to celebrate her successful season,” added Coach Young. “This was her first time running against such elite high school competition and I am so proud of the way she competed and of her journey to earn a spot at this meet.”

You can bet Nora took photos during the trip. Nora loves photography and taking pictures in all the places she’s visits, “mainly pictures of people and around the area,” she says. She spent some time in Iceland last summer, but Italy is her dream destination.

Although she has plenty of time to decide, Nora is already eyeing smaller schools in the Maryland area. Mount St. Mary’s University (in Emmitsburg, Md.) currently tops her list. If she keeps improving, expect many college coaches to give her a ring.

“Nora was brand new to running as a freshman and has made great improvement throughout her 3 years of high school,” said Coach Young, “It’s been a lot of fun to watch her run over the last 3 years.” Young added, “We are really lucky to have a runner like Nora to lead the way for us.”

That’s how much time separated Chase Weaverling, a senior at Poolesville High School, from the coveted 10th position at the Northeast Footlocker Championships Nov. 30. The top 10 finishers in each of the country’s four divisions -South, Midwest, West and Northeast, held in Van Cortland Park in New York City – advance to the highly touted Footlocker National Championship held in San Diego two weeks later.

Frustrated? Yes, but Chase knew he had given the race everything he had.

“I was fighting for one of the top 10 places during the last quarter mile of the race,” he said.

[button-red url=”http://www.runwashington.com/2013/12/16/runwashington-high-school-cross-country-team/” target=”_self” position=”left”] More of the All-RunWashington team [/button-red]With the finish line in sight, Chase managed to work his way up to eighth place, but then his legs “gave out”. Three runners surged ahead in the race’s final yards.

“My legs wouldn’t go any faster,” he lamented.

Three weeks earlier, after coming out victorious (by a margin of 30 seconds) at the Boys 2A race at the Maryland state championships, Chase wondered whether he would even make it to Footlocker’s starting line. After the race, Chase’s knee began to give him trouble.

“I did whatever I could do to take care of it,” Chase said. “I knew I was in good shape, so I tried to not worry about it. I stretched and went to physical therapy and it ended up being okay. Though, it definitely had me worried.”

“The class he showed after Footlocker was impressive,” said Poolesville cross country coach Prasad Gerard. “What was also amazing was how upset his teammates, and coach, were that he did not qualify.  We all knew how much it meant to Chase to qualify for San Diego and felt bad that he had just missed it.”

Placing 11th at Footlocker Northeast is certainly something to marvel, but Chase believes his best race of the season came at the Oatlands Invitational in Leesburg, Va., where he ran a personal best of 15:28 for 5-kilometers and placed second to Thomas A. Edison’s superstar Louis Colson.

After a well-deserved break, Chase will gear up for the indoor track season with his sights set on defending his 2-mile state title. As the indoor season dissolves into outdoor track, Chase will aim to qualify for the 3,000m at the Penn Relays. But first, he’ll need to run a 9:23 2-mile to qualify, which he’ll aim to do at one of the area’s larger meets.

“Whenever we go to a meet in the suburbs, I ask ‘where do they run?””

As a result of living in rural Montgomery County, Chase and the rest of his teammates are fortunate enough to have access to the various farm roads and hiking trails that crisscross Poolesville and the surrounding towns.

“We run on the (Chesapeake and Ohio) Canal towpath, the Seneca Greenway Trail and the trails around Blockhouse Point. I’m blessed with so many good places in Poolesville.”

When he’s not running (upwards of 60-miles per week) or studying (he boasts a GPA of 3.9), Chase enjoys strumming his guitar. “I’m pretty good,” he acknowledges, “I take lessons.”

Though, he admits he is far more focused on running and schoolwork. When you’re getting As in the classroom and striding to be one of the best runners in the region, there is very little time for anything else, or so you might think; he is also president of the Student Government Association.