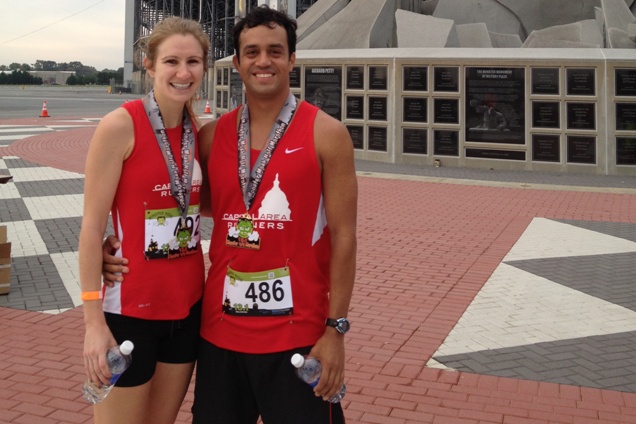 Twenty-two miles into the 2013 Richmond Marathon, Juan Sanchez passed Lauren Shaub. Shaub, an assistant coach with the Capital Area Runners, was long resigned to not breaking three hours; at mile 16, she remembers CAR head coach George Buckheit telling her, “Just hang in there!”

Meanwhile, CAR member Sanchez was running his third marathon after being inspired by Boston. He had started the race slow and reached a pace well above his standing PR. As he fell in alongside Shaub, Sanchez sensed that he would have to push his coach and training partner through to the end of the race. Acutely aware of Sanchez’s pace and peppiness, Shaub gave him one order: “Just go.”

Some might find it hard to live, train, and plan a wedding with another runner, but Shaub, 31, and Sanchez, 32, have found that a supportive partner makes all the difference. She is a longtime competitive runner who thrives on training, planning, and analyzing. He is a former wrestler who relishes racing but admits he isn’t ‘running for the sake of running’ just yet. She runs early, before spending all day on her feet as a physical therapist. He prefers to run in the afternoon. She’s trained with teams since high school; he first tried speedwork when he joined CAR this year.

Shaub and Sanchez met, of all places, in an operatory. Shaub was in a new job and observing a shoulder surgery; Sanchez was an injured wrestler mostly hidden behind a curtain.

“I honestly don’t remember meeting her,” Sanchez recalls. Shaub adds, “In a shoulder surgery, all you see is the person’s arm, so I didn’t really see him much.” When he returned to the office for physical therapy, Shaub asked how his shoulder felt. They began chatting during his sessions and their casual friendship expanded to the gym where they both belonged. “He and his friend asked if I wanted to lift with them,” Shaub remembers.

“Are you sure?” asks Sanchez, unbelieving. Shaub reciprocated by inviting him to a spin class.

Before his 30th birthday in 2010, Sanchez began training for the Marine Corps Marathon, which is how he found out that Shaub too had been a college athlete. They ran together occasionally until Shaub invited Sanchez to happy hour. “I didn’t know the rules of engagement, to say the least. I was still going to therapy at her clinic,” he remembers.

Nonetheless, the two became closer. Their joint training, plus Sanchez’s long runs with Potomac Runners, paid off with a 3:27 finish at Marine Corps.

Friendship elided into a relationship. She liked his athletic and military background, which paralleled her own regimented training.

“I know what he went through; he knows what I went through,” Shaub says of college athletics.

As the student athletic trainer for her high school wrestling team, she knew his sport well. And the better she got to know them, the more she liked his friends. “That told me the person he was, that he kept putting fabulous people around him,” she says.

For his part, Sanchez recalls inviting Shaub to watch a wrestling meet. She agreed, “no hesitation. That was like the turning point,” Sanchez recalls: “She was hot and she liked to go to wrestling tournaments.”

“And I’m still hot and I still go to wrestling tournaments,” Shaub interjects.

They continued to train and race together throughout their relationship, getting engaged in March of 2013. In the same year, Coach Buckheit made Shaub his assistant coach and welcomed Sanchez onto the team. Shaub’s physical therapy background had helped her teammates greatly.

“For quite a while, I’d been leaning on her to assist in those rare occasions when I broke somebody,” Buckheit remembers. He had taken on work with charity runners and Shaub could help instill good strengthening and stretching habits in the beginners.

Meanwhile, he watched Sanchez take to training like a fish to water. “I think this is just the first time [since college] that he had been diligent about getting on a training program and sticking with it,” says Buckheit. He often sees former athletes return to form in the warm embrace of a supportive team and a disciplined training plan. “If you know you’ve gotta meet somebody for workouts several days a week and one of them’s your [fiancee], it keeps your feet to the fire.”

As Sanchez made huge beginner’s leaps, Shaub nudged minutes off her own times. Racing together, they occasionally managed “Hollywood finishes.” At the 2013 Monster Mash Half Marathon in Dover, Shaub’s regular training partner Kelsey Budd took second overall and finished as the first woman. Shaub followed in fourth overall, the second woman. Just 31 seconds behind her, almost before Shaub knew what was happening, Sanchez crossed the finish line, placing third in the men’s race.

“I ran a PR,” Sanchez says humbly. “It was a 10-minute PR,” Shaub adds. Suddenly, a BQ seemed possible for Sanchez.

Is it all sunshine and roses to date another runner? Not entirely, they concede; someone has to walk their dog Rook, Sanchez’s American Staffordshire Terrier and their number one fan. Their training schedules don’t always leave them much time to relax together. After workouts, they sometimes fight over the bathroom.

But the good outweighs the bad. They have a built-in training partner to motivate them or at least wake them up in the morning. They understand one another’s goals and intentions, and they support each other when training is difficult. Now that Sanchez is training, he tires out earlier and spends fewer late nights out. “I’ve adjusted my lifestyle. It’s good for me,” he says, and early-rising Shaub agrees.

Despite their individual commitments to running, the couple won’t be getting married mid-marathon or racing to the courthouse. Shaub promises to run that day, saying, “If I have to get up at 2 a.m. to do it, I will. Running, for me, is a stress reliever.”

Still, no runner of their caliber could plan a spring event without taking the sport into consideration. “A lot of my friends are runners, and I didn’t want to interfere with Shamrock, Cherry Blossom, Boston…. I’ve already talked to our caterer about making sure that certain people are refreshed with more water than other tables,” Shaub says. They plan to honeymoon in Brazil for the World Cup.

When their paces converged on that fall day, Shaub remembers thinking, “He needs to qualify for Boston!” before urging him on. He’d hated spectating the year before, finding he really wanted to run what he saw as “the Big Daddy” of marathons. When Buckheit saw Sanchez crest the race’s final hill first, he quipped, “Oh boy, the wedding’s off.” Still, he’s confident that with patience and hard work, they will both break three hours soon. “They’re knocking on the door right now,” he says.

In the end, Sanchez ran a Boston-worthy 3:03:38 in Richmond and Shaub set her own new PR of 3:06:24. Despite their coach’s concern, the wedding is still on. In the finisher’s chute, Sanchez hung Shaub’s medal around her neck. As on running and wrestling teams, their individual achievements make their partnership stronger.

More Stories
Love, and a chill, was in the air in Pentagon CityRunning shorts