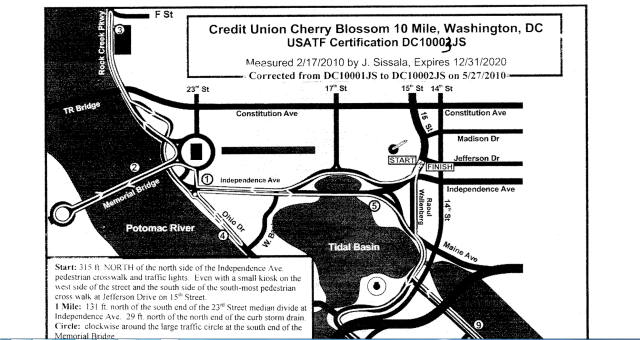 Have you ever finished a race thinking you’ve just set a personal record time, only to look down at your watch to discover that the race might have been too short? If so, you’re not alone.

Many races — from 5ks to marathons — are, in fact, not the actual advertised distance. When planning and organizing a race, the race director may opt to settle for “close enough” or just “pretty accurate,” which may result in the race being as far off as anywhere from 50 yards to a couple miles.

Fortunately, many race directors do ensure that their course has been accurately measured and is at least the stated distance, in which case the race will be described as “USATF (U.S.A. Track and Field) certified.”

The process of certifying races, however, is not as simple as entering start and end points in Google Maps or using GPS systems; it is a lengthy and meticulous process that not many people know how to do, let alone have put much thought towards.

The truth is, while many races last a couple of hours or less for most runners, the planning of certified races starts months beforehand.

The course certification process begins when the race director decides to plan a certified race, after which he or she will ideally plan a preliminary route and hire another person to do the certifying. It does not take a paid expert to measure courses — just an individual who is able to follow the specific guidelines laid out by USATF.

Two such race certifiers in the Washington, D.C. area are Bob Thurston and Lyman Jordan, both of whom have been in the business for more than 20 years.

Thurston was an active distance runner for much of his life and started getting interested in course certification methods in 1980, when he directed a race and realized how difficult it was to recruit someone to certify the course.

They both certify at least 30 races per year, including everything from one-mile races to marathons.

When asked about the best way to measure a course, Thurston pulled out his bicycle.

“It’s the best way to measure a course in a straight line,” Thurston explained.

Other modern measurement devices, such as GPS units and bicycle cyclometers, can provide good estimates for non-race runs and bike rides, but they are not accurate enough for USATF.

The most common course measuring method involves a “Jones-Oerth” counter, which is a counter that can be attached to the front wheel of the bicycle.

The bike must first be calibrated over a steel-taped calibration course, which is to be laid out and marked over a flat, straight road.

After the bike is calibrated, the bike must be ridden on the race course at least twice. USATF guidelines state that both rides must be within 0.08 percent of the distance of each other, or a third ride is required; once this requirement is met, the longer of the two rides is to be used. The route taken by the certifier is known as the shortest possible route, or SPR, which refers to the shortest route that a runner could take along the course and have an official finish.

Following the actual measuring of the course—known as the field work—the course certifier must complete paperwork and draw a detailed map of the course for the race director.

To provide a picture of how long course certification takes, the entire process for a 5k, for example, takes about two to three hours in the field, according to Thurston. The documentation, however, can take about 10 or more hours.

On how long it takes to certify a marathon, Thurston joked, “It pretty much eats up your whole life.”

Thurston retired from his full-time teaching job last year but says he feels just as busy now. “I don’t understand how I found time to do this when I had a full-time job,” he joked.

However, Thurston added that it’s important that people not get the wrong idea.

“It’s a lot of fun, and I love what I do,” Thurston said. “I get to ride my bike, which I enjoy, and I meet so many interesting people who I wouldn’t have ever met if I never got into this.”

Thurston is also well aware of the pure necessity of having certified race courses. Without such standardized guidelines, he explained, there would be no way to confirm the accuracy of personal records, let alone world records for set distances. Additionally, unless a runner enters races whose distances are accurately measured, his or her race times are not necessarily useful, and he or she won’t be able to accurately access progress.

Running certified races are also required in order to qualify for high-profile races, including the Boston and New York City Marathon.

Despite taking all the necessary measures required to certify a course, it does not come without obstacles.

Thurston recalls that some runners years ago got off course at the Marine Corps Marathon.

“By the time I noticed, it was too late to rectify the situation,” Thurston said. “Instead, I had to figure out a way to compensate for the missed distance by altering the end of the route.”

Thurston acted fast. After making all appropriate calculations, he immediately got in touch with the marines manning the aid station at the end of the course, who followed Thurston’s instructions, moved the guiding cones and hauled the aid station supplies in time to save the runners from an unofficial finish time.

In fact, you can find Thurston riding his bicycle out in front of the runners at this year’s MCM, just like he’s been doing for the past 20 years and will continue doing as long as he is able.

“I would like to see the day when all races are certified or measured to certification standards,” Thurston said.

The USATF and Road Running Technical Council made the following statement explaining why your GPS watch isn’t as accurate as the official source measurement:

GPS devices work by receiving signals from satellites. The quality of different GPS units can vary, but all of them can be affected by conditions such as buildings in urban environments or heavy overhead tree cover that interfere with reception of the satellite signals and can cause them to be inaccurate.

Race courses Certified by USATF are measured by a proven method that incorporates the calibration of measuring devices against a steel tape and are verified by multiple measurements.

Race courses are measured along a well-defined path called the “SPR”—the Shortest Possible Route that a runner can possibly run. Most runners don’t actually run the SPR, so the distance recorded by their GPS device will usually be longer than the certified length of the course, even though the course was properly measured along the SPR according to USATF rules.