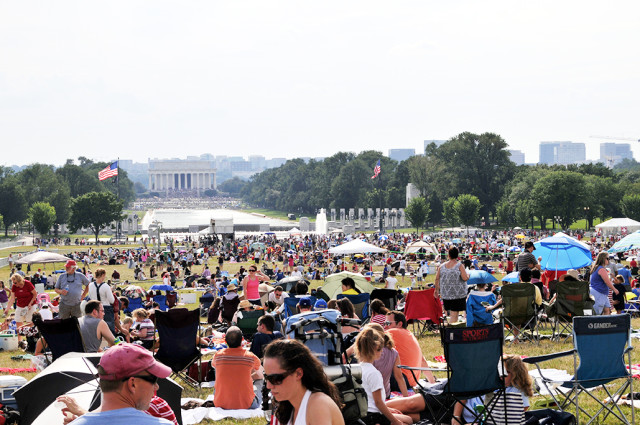 Okay my runners, joggers, ‘yoggers’ and you freaks who run 8-minute miles with a goddamn duallie stroller full of tiny human free-weights attached to your arms, let’s admit what we all know to be true: There are some pretty terrible places to run in this city. People talk about how D.C. was made for runners — gorgeous views of historic monuments, the smell of cherry blossoms and freedom in the air, the dream of running in the Marine Corps Marathon, whatever.

That is all well and good, but it paints an inaccurate picture of what running in this city actually is, which is sweat and misery. Because I am an idiot and will try to run anywhere, I have spent many miles and hours in a variety of inclement weather running around in D.C. and with a few exceptions, it has been fundamentally terrible. (Notably, this has not stopped me.)

Here, in my experience, are the worst places to run in D.C.:

I don’t know what is wrong with running bloggers, but they are always trying to convince me to run on Embassy Row, and to you freaks I have just one thing to say: Who are you? Have you ever done this, IRL? Why would you ever suggest this? This is terrible. There are stoplights everywhere and I don’t know where I’m going. My chances of getting run over by large black Cadillacs with diplomat plates (read: can’t drive) increases exponentially with every stride I take. There’s a hill. Knock yourself out.

Okay, I had several things to say.

The Tidal Basin during April

Dude. You wouldn’t go for a jog through Times Square at New Year’s Eve, would you? No. No, you would not, unless you were literally so new you only graduated from pacifiers last week. N/A

Widely-reported to be terrible. Huge groups of slow-moving tourists aside, there are herds of youths on segways. If there’s one thing we as a society have come to understand about segways, it’s that their drivers have absolutely no control over them. The inventor of the Segway died trying to control one of these beasts, and yet we routinely let the populace loose on them, when at any moment they may veer into your path, at which point: YOUR MARINE CORPS DREAM IS OVER.

Also of note: All the ways to get here are equally terrible. There are approximately 700 stoplights on 12th Street and unless you are running wind sprints between crosswalks, you’re not going to get anything out of this little “exercise.”

Because I am not a masochist, I do not do this. If you’re a noob, here’s what’s up on Wisconsin: A giant, never-ending hill. This is roughly equivalent to climbing Kilimanjaro with a stroller in front of you, except the whole time you’re climbing, someone is spraying exhaust and diesel fumes in your face. Don’t go here.

This sounds like such a good idea because, OMG, Georgetown, so twee, and then we’ll go get brunch. Well, I have news for you: It will be nothing like that. Not only will you be unable to move because of the sheer density of humanity, but the particular subsection of humanity here either: a) wears a fanny pack and regards running with the same level of suspicion that it regards “Millennials” and/or Hillary Clinton, or b) wears Lululemon and says things like “shopping is my cardio.” Avoid.

This seems like a good idea, but some guy tried it last year; it didn’t work. Not recommended.

Read more of Katie Bo Williams’ writing, including her annotated guide to running in D.C., at Ruralicity.