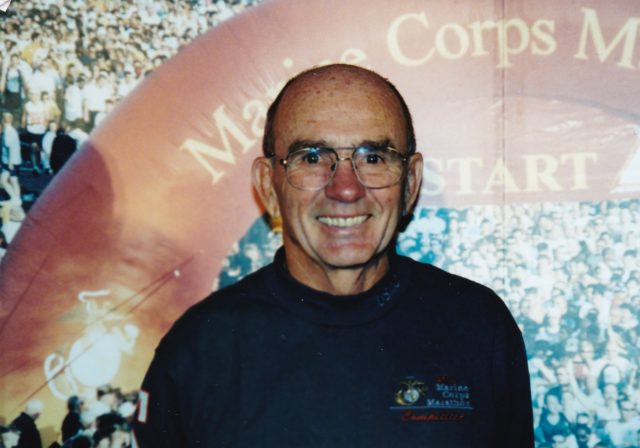 Mel Williams, a Norfolk runner who finished the first 38 Marine Corps Marathons, died May 19 at 78, as a result of bone cancer. He was inducted into the MCM Hall of Fame in 2001.

He was one of two of the four remaining Ground Pounders who ended their MCM-finishing streaks in 2014. Williams made it to mile 15.

He taught physiology at Old Dominion University, where he founded the Human Performance Laboratory and Wellness Institute.

He did not run competitively while in high school or college, but his daily running routine was part of the training while on active duty in the U.S. Army. Williams served from June 1955 to June 1958 with the 11th Airborne Division, as a paratrooper medic.

The active running started in 1972 with the formation of a local running club, The Tidewater Striders out of the Norfolk/Virginia Beach, Va.

Williams led the group of six who have completed 38 of the Marine Corps Marathons through 2013. When it came to performance, he managed over the years to dominate each of his age groups since turning 40. Of his MCM finishes, he finished 21 under three hours and 33 under four hours. A back injury affected the time in 1995 which resulted in a time of 3:10:50, and a hamstring injury in 1996 resulted in a time of 3:31:26, his slowest time ever to that date. His best performance came in 1982, with a 2:34:49 finish, good for third master.

Williams ran the first Marine Corps Marathon, his third marathon,  two weeks after running the New York City Marathon. He spent the night before the race partying until 2 a.m., followed by a four-hour nap and a trip to D.C. from Columbia, Md. He ran 2:51:41  for 86th place.

“I ran with a hamstring injury that I had been nursing since early September; I did not know if I would be able to complete it or not, and actually had to stop several times to stretch it out as it became somewhat painful,” he said. “However, the pain began to fade and I finished at a comfortable eight minute pace.”

Williams accepted taking rest days to ward off injuries. He preferred running in the mid morning, but pushed his workouts earlier in the summer.

“My perspective on racing is simply to finish the race, particularly marathons,” he said. “If I set an objective, such as a particular time, but do not make it, normally it does not bother me unless I made some mistake that contributed to my not making the objective.”

The final run at the Marine Corps Marathon was on October 17, 2013 in a time of 6:18:57. The back was causing the problems which resulted in running and walking for the race.

Williams was instrumental in the formation of the Tidewater Striders Running Club in the Hampton Roads area.

He published his first book, Drugs and Athletic Performance in 1974.