Thank you to everyone who voted for the Best of Washington Running this year! We had to keep the voting to a month and a half to accommodate our publishing deadline, but we also had more than three times as many votes cast than in 2016.

Deputy Race Director Becky Lambros, who manages the expo, acknowledges that the race is a much different lessee the museum staff are accustomed, but they welcomed the runners and throughout the intervening years they have become a true partner in our event,” she said. “The soaring venue, location close to the metro and the wonderful staff have made the expo at the
National Building Museum a wonderful place to start race weekend.”

And, for out-of-towners, it helps them check another museum off their lists.

When most races begin the planning process, they start small with an eye toward growth in the future and try to cut disruptions to a minimum. Not Gena Mitchell; she wanted to stop traffic. When setting out to plan the D.C. area’s first Down Syndrome-related event, she wanted it to be less of a fundraiser and more an event for every participant to remember.

“So many ’cause’ races raise money to wipe something out, eradicate something,” she said. “We want to celebrate what our children and people with Down Syndrome can do.”

So having the race in downtown D.C. was a must, starting at Freedom Plaza and heading down Pennsylvania Avenue past the Capitol. Mitchell also wanted it to serve the competitive racing community, partially to bring people into the community but also to establish the race’s viability

“If the race we built the event around wasn’t worthwhile, the whole thing would feel hollow,” she said. “I just wanted to do a great job with it and for people to have a good time and want to come back next year.”

Most of the proceeds go into the event, though special education grants are awarded to the largest school-based team and the nine regional Down Syndrome networks.

Near Ford’s Theater is a dicey place to sell running shoes, but Potomac River Running has thrived by being right in the thick of the downtown business district and pretty close to the National Mall, where no doubt hundreds of tourists discover, halfway through their visits, that their old busted sneakers aren’t going to last at the pace they’re walking around the nation’s capital.

Former professional runner Ian Connor has taken the reins of Gainesville’s running specialty store, which will be celebrating its 10th anniversary this November.

Top to bottom, the Montgomery County Road Runners Club owns suburban Maryland running. With a designated back-of-the-pack group, it ensures that eveyone has a place in is variety of training programs, while at the same time members of the club’s competitive racing teams go shoulder-to-shoulder with some of the region’s fastest. The club also plays host to races of all types, from track miles to two (technically three) ultras.

At a time in a child’s development when social dynamics can muddy the waters of personal growth, Girls on the Run offers lessons in good health, happiness and confidence all based around the joy of running. Girls in grades 3-8 meet before or after school with volunteer coaches and train for the 5k that closes every season. The national organization is in its 21st year, the D.C. area is home to three chapters- D.C. Northern Virginia and Montgomery County, with the Piedmont (Virginia), Greater Chesapeake, Frederick County and Central Maryland chapters a little farther out.

Back on my Feet 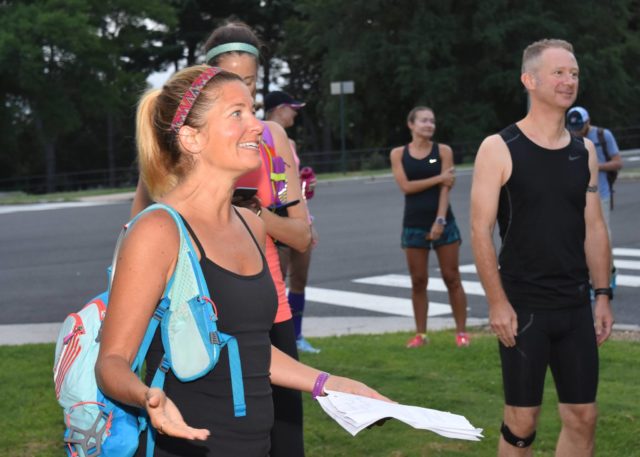 “She understands running, the biomechanics, the structural issues, the anatomy, but she really listens to what people want and what their goals are,” he said. “She thoroughly explains to a group or individuals what you need to do, and in detail.”

Perhaps her greatest coaching job, Trish Peva points out, is successfully running with her daughter, Ava.

“As a mother of two teenage girls myself, I know that that is truly monumental,” Peva said.

Rockville-based ProAction Physical Therapy is a perennial contender for the Best of Washington Running, with Rachel Miller winning Best Physical Therapist in 2014 and her partner Ken Fleit finishing second that year, and Miller finishing as runner up in 2016. 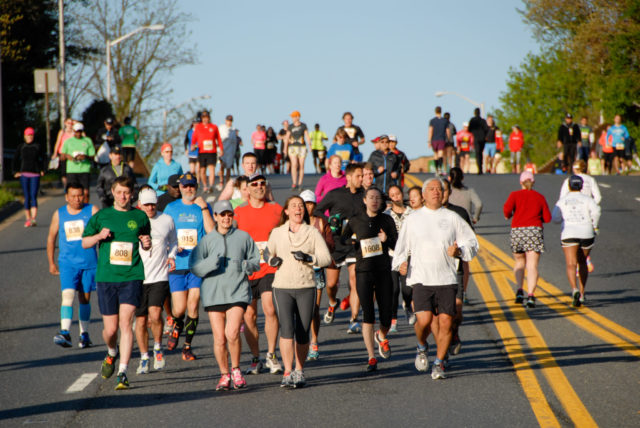 If you aren’t running Boston or the George Washington Parkway Classic, chances are you’re thinking about trying for a 10k PR at Pike’s Peek. Though the course changes in recent years have made the downhill route a little less ridiculous, several of the miles leave runners feeling like there’s little-to-no consequence of just running all out.

A popular ultra offers a 50 mile and a 50k, along with a few other races for shorter distance runners, like marathoners, who aren’t quite ready for the big time. It weaves through the Potomac Heritage Trail starting in Sterling and reaches Great Falls Park.

Some say it’s the triumphant climb up the hill to the Iwo Jima memorial. Others love looping the Mall. Or running on Spout Run Parkway.  It’s not the fastest course, and a windy day on the 14th Street Bridge can back that point up, but it’s comfortable, reliable and

It’s also subject to permits from a variety of local governments and agencies, and when the Metro SafeTrack restrictions tightened the window for runners to reach the starting line in 2016, Operations Manager Bret Schmidt managed to rework the course to give people a little extra time to get to the line while also opening the 14th Street Bridge as scheduled.

From its roots as the National Half Marathon, the Rock ‘n’ Roll D.C. Half Marathon serves as a rust buster for many runners targeting a Spring marathon or as a target to get people through the usually-tough Winter months.

The course is tough, but fair. Remember, when thinking about climbing Shoreham Drive out of Rock Creek Park, that you get to barrel down to the reservoir a few miles later.

It’s true tour of D.C. From the Mall, to Rock Creek Parkway, through Columbia Heights, H Street and Capitol Hill. And how many other races pass right down residential streets?

Best place to take a visitor for a run in D.C.

Best place to take a visitor for a run in Maryland

Best place to take a visitor for a run in Virginia