In November of 2010–fewer than four months after he conquered the legendary Western States 100 mile endurance run in under 27 hours, and about a month after being diagnosed with stage four lung cancer–Mike Broderick passed away peacefully just days shy of his 54th birthday.

Those closest to Mike, knew him as an avid ultra-runner with a sharp wit, a big smile and an abundance of enthusiasm for all things running. For the rest of the running community, he was best known as a coach, a mentor and a teacher. He was a bit of an evangelist, preaching his love of running to everyone who made his acquaintance. Mike, to his running disciples, was well known for his ability to respond in deep scientific detail to very simple yes or no questions.

That legacy has kept a popular training group in his honor – Broderick to Boston, going eight years after his passing.

“There were really three other things that were equally important in Mike’s life,” recounts his wife Jill. “He was an accomplished scuba diver and a sailor, but more than those things he was a lover of live music and the Grateful Dead. He led a pretty vibrant lifestyle. It was always fun, fun, fun!”

The group meets at 7 a.m. in the parking lot near the Bethesda Panera at 7201 Wisconsin Ave.

Mike was also a smoker and, “over the years he developed a bit of a drinking problem,” Jill Broderick confessed. “He knew he had to let it go and recognizing that, he joined an outpatient class at Suburban hospital and he never looked back.”

While looking to make healthier lifestyle choices, Mike heard about the Montgomery County Road Runners Club’s (MCRRC) First Time Marathoners (FTM) program and decided to join. He was hooked, and before he knew it he was running marathons and very soon after–ultra-marathons. Any free time he had he spent immersing himself in all things running.

Around this time, Mike was tiring of practicing law and wanted to have a more positive impact on those around him. He felt that coaching was the perfect way to fulfill that need. Before long, Mike had taken the coursework and certifications to become a personal trainer and a certified running coach.

Eventually, he took over the FTM program and spent a few years as the head coach.

“When Mike morphed into ultra-running he recognized that there really wasn’t a place or a program for ultra-runners,” Jill Broderick explained. “He realized that there were runners who wanted to get faster, run farther, and that the FTM program wasn’t giving them what they needed.”

In 2002, Mike Broderick, founded MCRRC’s Experienced Marathoners (XMP) program to fill that need. The first year there were 66 runners and four coaches. Steve Hays was one of those coaches.

“Mike was very intelligent. He did all of the research he possibly could and if he learned something new, he wanted us to know about it,” Hays said. “Mike really went all-in in trying to become the best coach he could be. He went to seminars, he’d constantly read, he’d get different certifications.”

Broderick’s XMP training program consisted of a solid base of easy miles with long runs conducted at a much slower pace than a runner’s anticipated marathon pace. It also included weekly track workouts and a tempo day with higher mileage, including about half at marathon pace. Runners were separated into pace groups based upon recent race results, and paces for each specific workout were calculated from that data for each runner.

Mike was a stickler about adherence to assigned pace and was known to unceremoniously toss people from the program if they strayed from that requirement. It was the LSD — long slow distance — runs that Mike felt was the secret sauce. Ever the hippie, his sense of humor and ties to the 70s was evident in everything he did. The XMP program singlets one year proudly boasted, “Trained with Speed and LSD.”

By this time, Mike had stepped away from his law practice and was providing coaching services to individuals while also coaching XMP during the summers. Meanwhile, he was continuing to learn, study and gain expertise in his newfound passion. He gained higher levels of certification through the Road Runners Club of America and through USA Track & Field, and before long he was teaching the coaching certification courses to aspiring coaches all over the country. He had become the coach’s coach.

Broderick quickly recognized that because XMP was producing so many Boston qualifiers that there may be a viable market for creating a winter training program designed to prepare these runners for the Boston Marathon in April. The Boston Bound program was born in 2008 and was comprised of nearly 50 runners–virtually all of them from the XMP program.

The program was not affiliated with MCRRC and was operated as a small business by Broderick. To add value to the challenging program, Broderick added a weight-training component and more specialized coaching, including guest speakers every other week focusing on science, nutrition, strength training and injury prevention. He also provided a high-end premium for runners, and a few weeks before the race runners participated in a simulated mock long-run where runners could practice all aspects of their Boston Marathon race day experience–from clothing choices to nutrition–as preparation. It was unique.

The program was a success through the spring of 2011 despite Mike’s passing in late 2010. However, for a variety of reasons the coaches chose not to continue the program in 2012. Thankfully, XMP and Boston Bound participant Julie Sapper teamed with a few other club members to keep the program alive. The program was renamed Broderick to Boston –B2B for short–in Mike’s honor and has grown each year since.

Broderick to Boston is now in its eighth year as a free program. It remains unaffiliated with MCRRC and the Facebook page boasts 350 participants. As many as 75 runners meet each Saturday morning in Bethesda to train together, running distances from 16 to 22 miles from January through April. Nearly all of them plan to run the Boston Marathon this year.

“It’s a group that runs itself, it’s not formally coached and everyone contributes their own nuggets of wisdom and everyone knows you’re running at your own risk,” Sapper said. “No one pays anything. There are no waivers. All communications are via a private Facebook page. We just ask that people follow the rules and be kind and don’t rock the boat and honor Mike in that way. Unbelievably, this is exactly what has happened and the group has continued to thrive.”

“One thing about Mike that I loved is that he never made it to Boston,” Sapper said. “He had no ego because he created a whole program to help train people for Boston, and he had such a deep understanding of the race course, yet he had never run it himself. I think that makes him unique.”

“He wasn’t the fastest runner, but there were tons of fast runners that he coached and I think he took pride in watching them get faster,” he said.

Perhaps one of the greatest legacies that Broderick left behind was inspiring so many runners to become certified coaches themselves. The B2B program has more than a dozen within its ranks.

“A lot more people are coaches today, thanks to Mike,” Hays said. “We help perpetuate Mike’s legacy by passing along these best-practices by helping others. We like to see the young runners continue to get faster.”

“The fact that B2B continues and the fact that so many people take so much pride in making sure it continues is a testament to how much Mike meant to everybody,” Hays said.

“I think B2B honors him in the most perfect way. He loved running so much. I think it changed his life and I think he also saw how it changed other people’s lives. I think he would just be so proud that the program continues,” Hays said. “I think it’s fantastic!”

Broderick’s wife says it makes her so happy that he is so well remembered. “More than anything, he wanted people to succeed, get faster, be stronger and strive. It brought him so much happiness, but it was just as important for him that everyone enjoy the ride and have fun!” 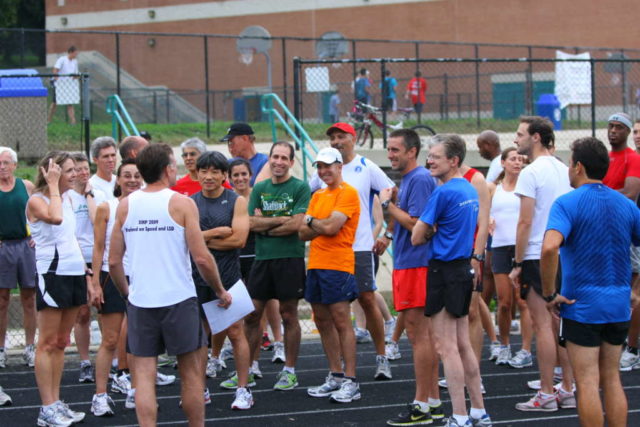