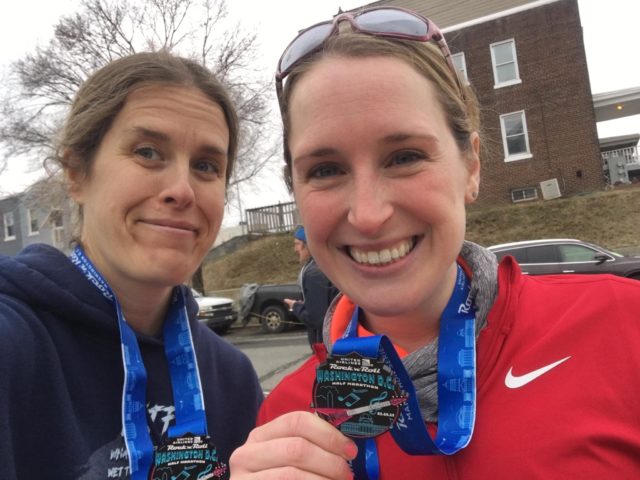 Ashley Davidson is a public relations professional who recently chronicled the Tidal Basin Runs and has written for RunWashington since 2015.
Read more of her work here.

Why you run: In my mid-20s, I ran because I was bored. When I hit 30, I needed the self-esteem boost. Now, I need to alleviate my back pain.

When did you get started running: I ran track in middle school, but then didn’t run again until I ran my first 5K at 23 (which I hated). My next 5K was in 2011 at age 25, and I’ve been running every since.

Have you taken a break from running: Only when the temperature drops below 15 degrees.

The hardest race you’ve ever run: The first and only time I ran the Rock ‘N’ Roll Marathon in D.C. That second half was brutal, mentally.

Most adventurous decision you’ve made with your running: To run two marathons in three weeks. I never made it to the second one, due to injury. (Who would’ve thought…)

Running mentors: Scott Kaldahl, my coach from my first marathon, when I ran with Team in Training Miami.

My favorite place to run in the D.C. area is:  Anywhere with shade.

Favorite local trail:  I live near Holmes Run, so it has a special place in my heart.

My best race was: 2018 Chicago Marathon – huge props to anyone that pushed through that torrential downpour.

Favorite local race: Parkway Classic – I’m all about the downhill.

Ideal post-run meal: Depends on the day and the run, but guaranteed after a marathon I’ll want a cheeseburger – and a mimosa.

Favorite flavor of gel, gu, etc: Don’t use them.

Pet peeve: Cyclists that don’t ring their bell and scare the crap out of me as they zoom by.

Your advice for a new runner: Get fitted for shoes.

Favorite running book: Wild – it’s about hiking, but I love that Cheryl Strayed took a (somewhat) solo journey on a section of the PCT to figure out her hot-mess life.

Song in your head during a run: I listen to audiobooks, so typically don’t have a song in my head.

Have you dealt with a major injury: IT band – chalk it up to being an over-eager, newbie runner.

Running quote: “If you don’t have answers to your problems after a four-hour run, you ain’t getting them.” (Born to Run)

Why is the D.C. area a great place to be a runner: The trail network and the incredible community.