That much was clear as I cautiously approached a group of runners convening near a D.C.-area metro station. No one glared down at a Garmin, willing it to load data. I saw no race t-shirts and no new shoes (sporting either is a punishable offense with this group). And instead of a 40-person group stretch, a chorus of raucous voices sang an unprintable song while doing what might be  considered, generously, a silly dance.

Yep, after five years of running in the D.C. area — a hashing hotbed and location of the first hash in the United States — I finally  went out for a run with the Hash House Harriers. A local group was generous enough to welcome me, a “race-ist” (as in, I run races) and member of the media, to their 1,651st weekly hash, and I’m happy to report that I lived to tell the tale.

The Hash House Harriers, if they chose to identify as a running club, would be one of the oldest and largest running clubs in the world. “We identify more as a social group, not an athletic one,” commented one D.C. member as he took a sip of beer on a mid-run break. “It’s exercise, but don’t say that word too loud,” noted another.

Hashing originated in 1938, when a group of British expats and military members posted in Kuala Lumpur got bored enough to start  scavenger hunt-style game in which a pack of “hounds” chased a “hare” leaving a trail. Hashing groups today are called “kennels,”  as in a kennel of hounds. The Hash House was their nickname for a local restaurant with terrible food, where they ended the game with drinks. Their founding tenants were: “to promote physical fitness among our members…get rid of weekend hangovers… acquire a good thirst and to satisfy it in beer… [and] persuade the older members that they are not as old as they feel.” 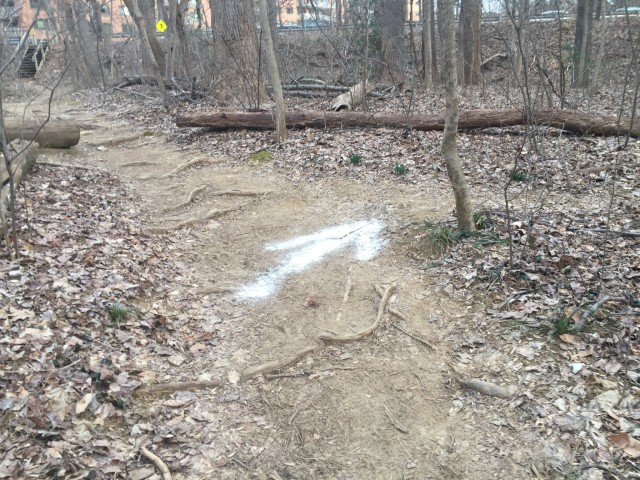 After taking a break for World War II, hashing picked back up first in Italy then Singapore. By the 1970s there were over 30 hashes in 14 countries, and today there are approximately 2,000 kennels worldwide, including two in Antarctica. Hashing has become the sport of choice for many military and foreign service members and provides an accessible social network for those abroad. Not surprisingly, with its military and internationally-minded population, the greater D.C. area has become one of the largest hashing communities in  the United States. It started in 1973 with a men-only kennel that still hashes in the area, but has expanded and diversified to include somewhere between 12 and 18 kennels (depending on how widely you define the D.C. area) and well over 1,000 participants. A search for hashing in D.C. yields a schedule of hashes almost every day of the week, year-round. “Yep, we’re out here rain or shine,” one man boasted during the hash. “We hashed during Snowmageddon, during Hurricane Sandy,” proudly declared one  couple. “The hash is pretty adaptable, all it takes is a couple people saying, ‘let’s do it!'”

Though they share a name and some hashing lore (they even have a patron saint, one of the original hashers who was killed as a prisoner of war in WWII), each group’s traditions vary. For example, a visiting hasher from Abu Dhabi noted that her group cannot do the Red Dress Run, a hashing tradition in which everyone wears red dresses, because a wearing a dress is a crime in the United Arab Emirates. One hasher I met (“we’re huge travel hashers!” she said of her and her husband) has hashed in Panama, Austria, Germany, and all over the United States. “Each kennel is different, but they all have the some things in common: frivolity, drinking, trails,” she explained. “And one thing I’ve found universally is acceptance. Hashers are very welcoming people.”

“I tell my friends it’s an uninhibited crowd,” noted an avid hasher who first hashed in Ukraine in 1996, then went on to try it in Armenia and eventually D.C. “Double life” and “alter ego” were terms he used to describe his hashing self. “When I’m at work I’m  much more buttoned up of course, but at the hash it’s a little different.”

“This isn’t a ‘family-friendly’ environment,” he went on to explain. “But there are a couple kennels in the area that do family-friendly hashes. You can bring your kids to this, but we’re not going to tone it down.” One woman, carrying her infant for the walking hash, cautioned that “Hashing is not for everyone. It’s raunchy humor and we like to make fun of ourselves and make fun of each other.  But it’s all in the spirit of acceptance and getting together for a good time.”

The hash I attended was definitely not of the family-friendly variety. As the mostly-costumed members of the group milled about, my trusty accomplice and I approached a woman with a sign-in sheet. “First timers!? You’re both virgins! That’s great! Who made you come?” she exclaimed as she marked a large “V” next to each of our names. Regulars sign in with their hashing names — all double-entendres, mostly unprintable — while I was “Just Mollie” for the day.

This is definitely not an activity for the sensitive or prudish.

Before the hash could begin, we gathered in a semi-circle around a member of the “mismanagement” team for the “chalk-talk.” He called up virgins and visitors in two groups to be sung scandalous songs and mocked (I was heartily but not hurtfully booed for my association with this competitive-oriented magazine.) Then with a brief explanation of the rules, we were off!

The normal drill is for one or more “hares” to mark the approximately four-mile running and two-mile walking routes in advance. They sprinkle chalk or flour in symbols on the ground for the group of hashers (or “hounds”) to follow. The route is designed to keep the faster runners searching for the trail while the slower runners catch up because, though this may sound crazy to many readers of this magazine, it’s not a race! According to participants, it’s about fun, not competition, and anyone trying to “win” the hash is called out as an “FRB,” which is a derogatory hasher term for the frontrunner. To keep the group together, regular hashers carry whistles around their necks to signal the trail, and or shout “On! On!” as they find the way.

It is no mean feat to put on a scavenger hunt for 40-plus people, both walkers and runners of varying speeds, every week. “When you’re the hare, you pick an area you want to explore and go out scouting,” said one hare. Hashes can take place in urban settings, or off the road in mud and reeds. Off-road trails are known as “shiggy” hashes, for these hashers wear tall socks to protect their legs from briars and brush. “The challenge is to try to time it out so that runners and walkers break and finish at the same time,” she explained. Some kennels have runners and walkers on the same trail, but “I like that our kennel has a shorter trail for the walkers. We try to keep the running pack together and make sure that the runners and walkers all get to the checks and the end at the same time.”

About halfway through there is a “beverage check,” and there also might be one or more “shot checks” along the way. Running and drinking are activities I usually enjoy in a very specific sequence. But for hashers, running and drinking followed by more running and more drinking is par for the course. “I mean really, it’s not that different from having a Gatorade before you run,” explained one hasher as he jogged alongside me. “Raceists drink beer after their runs; we’re just one step ahead and do it during the run!” Though drinking is encouraged, this isn’t a fraternity — if you prefer to stick with water no one objects.

“I was in the Army when I first heard about hashing,” one woman started her story. Some of her fellow Marines suggested she try hashing, “but I hated running, I said no way would I ever run for fun.” Years later she was again asked to hash and at first she demurred, afraid of embarrassing herself. “But they said, ‘no problem you can walk,’ so I said ok why not.” Now, five years later, she has progressed from walking to run-walking to running six half-marathons. “Even as slowest runner in the pack, I’d never be alone. I don’t feel compelled to run, but the more you do it, the further and faster you want to go.”

The hash ends with a circle, which can better be described as a communal roast. The hashing virgins are brought up to be temporarily named, mocked, and sung raucous and ribald songs reminiscent of hashing’s rugby roots (I promised the hashers that their lyrics would be kept off the record). Visitors are given the same treatment, while hares are made to explain why their trail was so bad. Then the hashers begin calling out one another for “violations,” all in the most friendly and welcoming way possible, considering the jokes are 100 percent scandalous. However, I’m happy to report that the hashers are equal-opportunity slanderers both men and women are the butt of lewd sexual jokes — as long as you’re ok with dirty humor it is good silly unclean fun.

“This is a group of very serious people who don’t take themselves too seriously,” seemed to be the theme. The ages ranged from a couple of teenagers to people in their 40s and 50s — from what I could tell the usual DC mix of government, military, non-profit, and consulting employees, but a decidedly unusual lack of suits and seriousness. Said one man at the finish, beer and a cup of potato chips in hand, “The great thing about hashing is the diversity. You can have a general, an ambassador, and you know, whatever,  the janitor, and we don’t care about that stuff at all, we’re just here for the hash.”

More Stories
Back and Better Than EverRunning Shorts, March 28