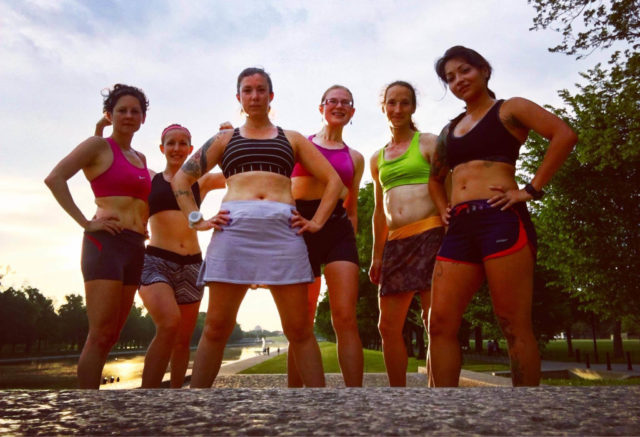 Women in D.C. are ditching their shirts for their runs: It’s not about looking cute or beating the heat; it’s about striking the conversation of body positivity and how empowering being a woman is.

“We want to change the mentality to recognize our accomplishments [as runners] and we do that through running in a sports bra,” said Lauren Masterson, co-founder of the running group #SportsBraSquadDC.

Masterson, along with Erin Brown and Marisa Carden, started #SportsBraSquadDC as a continuance of body positivity conversations they were having together.  Through word of mouth and social media, it became a tiny, yet supportive community.

“Not all runners look alike, and that doesn’t determine at all their athletic ability,” Brown said. “We are women. We are much more than our appearance.”

As part of the body positivity movement, many bloggers, runners, running groups and even Women’s Running Magazine are promoting women to join the #SportsBraSquad, a social media movement to enable more women to run in their sports bras.

It’s changing the perspective on what a fit woman looks like.

Blogger Kelly Roberts is credited with starting the movement and hashtag. After struggling with her own insecurities and self-doubt as a runner, Roberts was in the middle of a long run and was too uncomfortable to continue on wearing her shirt.

“So what if I don’t have a six pack or a thigh gap?” Roberts questioned in a blog post. “I work too damn hard not to feel sexy, strong, and confident in my sports bra and that’s all that matters…From here on out, I promise to wear my heart and my insecurities on my sports bra. And that is why I sweat.”

Sports bra running groups, like #SportsBraSquadDC, are popping up all over the country. As part of the movement, these running groups are hosting a virtual meet-up on June 24 where all participants will get together to run. Local athletic store Summit to Soul in Washington DC is playing host to #SportsBraSquadDC.

The running group also serves a bigger purpose: It’s a reminder that women aren’t alone in their struggles. Many women feel uncomfortable in their own skin, but when surrounded by like-minded individuals they’re able to break through their own barriers.

“Women get so caught up in what athletes, especially women, should look like,” Brown said. Describing her first sports bra run as freeing, “I don’t have a six pack, but the moment I took off my shirt and started running in a sports bra, it trigged so much more confidence in my athletic ability.”

And the confidence has trickled into her everyday life. After recently moving, Brown started her own squad in her new home of Richmond.

The ladies created a private Facebook group for their collective and in just two months, both the running group and Facebook group have risen in popularity. Even if a runner can’t attend the group, they’re encouraged to share photos of their own runs. The group meets most Thursday mornings in Georgetown near Gypsy Sally’s.

“We all do ultra-marathons, so we’re all running many, many miles, doing big-time races, and none of us run without our shirts off,” Masterson said. “If you think about it, aesthetics aside, we’re strong enough to do these races. Why shouldn’t we run with our shirts off if we’re hot?”

The group stresses inclusiveness. Regardless of age, pace, or running background, all are invited to attend. It’s about celebrating accomplishments.

Some group participants bought black sports bras that read “BADASS,” and on one morning run, five ladies all donned the matching bras. During that run, Masterson said, they got high fives from passersby. But, they also got some honks from male drivers.

Alexandra Stone, a fellow member of the #SportsBraSquadDC, said catcalls come with the territory,

“It’s sad that a woman can’t feel comfortable in her own body and run in a sports bra,” Stone said. “I think the more women that do it, and the more confident they are to do it, the less (frequently) men will do it.”

All of the women agree that they would like to see the D.C. group expand, and to have more groups pop up. It has global potential, Brown said. Ultimately, they want to help end the perception that runners and athletes must come in one size: tall and slender.

“We all have different bodies, and we should all be proud of the bodies that we have,” Masterson said. “We should be proud of what our bodies do for us.”