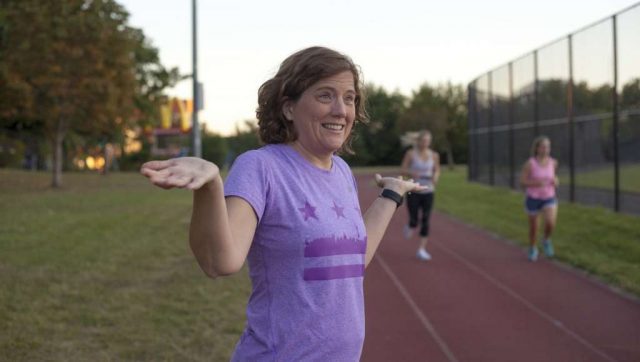 Running is often derided as the sport for less-coordinated people, which, ironically, may be what makes it attractive to those who are awkward or clumsy and are seeking ways to become fit, lose weight or galvanize a life change.

And D.C. is full of them, from a former “fat kid” to the girl awarded “Most Improved in Gym.” Three participants in Pacers 14th Street’s social runs — Caitlin Briere, Mike Parks and Jessica Rose –show us that it’s never too late to discover your inner athlete.

Briere is a self-described academic nerd whose parents didn’t encourage sports, because they hadn’t been athletes themselves.

She remembers her younger self as “the gangly, clumsy kid who was almost always sporting at least one scraped knee,” and who was not a natural fit for athletics.

“Neither of my parents were ever big into athletics, and so, growing up, neither of them went out of their way to encourage me to pursue sports. It wasn’t deliberate; I just think that sports were never really on their radar as something to encourage me to do.”

She didn’t play organized sports regularly; instead, Briere was good at academics and turned her time and talent there. Over time she “didn’t make any effort to become more athletic because I thought that I just wasn’t cut out for those activities.”

After moving to D.C. and in the aftermath of a breakup, Briere decided to make a productive change in her life and started the Couch to 5K program. In the process, she discovered a supportive running community in person and online, more training programs and a path to her first marathon. Since then, she has run 13 marathons and 10 half-marathons.

Briere‘s parents are now on her cheer squad and she continues to run with groups like Pacers 14th Street.

“The other runners in the Pacers fun run group are also really supportive, and often ask about my latest race or how training for an upcoming race is going,” she said. “Even my boss, who doesn’t run at all, tells me how impressed he is with my dedication to marathon training.”

Today, Briere considers herself an athlete.

“It’s incredibly empowering to have found a sport that makes me want to better myself, not to please a coach or teammates, but just for my own benefit,” she said. “When I run, I’m only competing against who I was yesterday or last month or last year, not against anyone else. I think that’s a big part of why running clicked for me so much when other sports never did.”

Parks was “the fat kid” who played soccer, but was always the goalie, because running was difficult. Today he is a marathoner and trains in multiple sports.

Parks regularly participated in youth athletics because his parents wanted to expose their children to lots of different activities. He was insecure about his weight, but always felt accepted by his peers and coaches. In Parks’s experience, “Teams are composed of neighbors and classmates, so there’s an existing bond that you build on.”

As an adult, Parks made some changes, dropped the weight and keeps it off largely through running.

“Running was essential to this change, particularly since I was able to measure progress and it is the most efficient calorie-burning activity,” he said.

Parks has been a regular runner for the past eight years and has added cycling, swimming and yoga to his routine. The Pacers 14th Street group has been a big influence on his athleticism.

“Finding friends with the same interests and goals in athletics continues to keep me engaged with fitness,” he said. “Being around a good group of encouraging training partners keeps me motivated, especially when dealing with injuries.”

Today, Parks spends less time watching TV and goes to fewer happy hours because working out is a more attractive alternative. “I get so much fun out of it that it never really feels like work, even when the training cycles get hard.”

Rose’s early experiences with gym and school sports earned her the prize for “Most Improved in Gym” at the end of the fifth grade. Today, she runs local 5K races and logs at least one half marathon each year.

A “klutzy kid,” Rose describes her elementary sports career as “gym class and recess. There was jump rope, kickball, dodgeball and square dancing! In fifth grade we added field hockey, soccer and softball.”

She has three siblings, and while she was never explicitly discouraged from sports, she wasn’t encouraged either. Because she did well academically, being “good” at other things like art, music or athletics was not important. Further, teams and group activities presented other challenges. “So much of sports at a young age is really competitive and team-based… trying out for a team was just added pressure. For an introvert, team-based sports aren’t such a great fit.”

It was as she approached 40 that Rose became determined to run a 5K.

“I thought that this is something I should be able to do physically–there was nothing wrong with me and this was a basic thing. I had friends who did them all the time for fun and so I went with them to my first one.”

Later, when she struggled with running, she convinced her husband, Daniel Ginsberg, to start running as well. Today, with a little help from a sports medicine doctor, she is running well and continues to improve.

Rose counts her husband as her major motivator and runs with the Pacers 14th Street group when work doesn’t interfere. The 5K is her distance of choice. She also hikes and takes the occasional barre class.

I asked all three to give their elementary-school selves advice based on what they learned in the years since.

Briere said, “Broaden your definition of what it means to be ‘athletic’ or ‘good at sports.’ There are so many ways to be active and healthy, and they don’t all have to fit into the box of organized sports leagues.”

For Parks, “I certainly wish I had been able to find a sport to consistently compete in. Not only for the joy that I get out of it now, but if I had started younger, maybe I’d actually be fast.”

And Rose concludes, “Be open to trying new things and learning a sport or skill. That takes time and effort, but like riding a bike, at one point you just get it. It also really requires strong role models who support the introverted klutzy kids and help them find something they enjoy. Focus on developing skills and a lifelong enjoyment of being physically active.”

These three are terrific examples of people were not high school or collegiate athletes, but who used running as an opportunity to discard previous notions about being athletic. They have learned that being picked last for kickball is no longer as important as feeling good while crossing the next finish line or claiming a new PR.