“If it’s not on Strava, it didn’t happen.” Runners and bicyclists frequently use this phrase, either jokingly or sincerely, to describe the fitness-tracker-turned-social-network.

Miles, splits, maps and sweaty selfies are all compiled into one social media experience. It may be your non-running friends’ nightmare, but it offers a unique opportunity to connect with both local and international athletes.

Robbie Brusso, a member of the Northern Virginia Running Club, knows all 18 people he is following on Strava with one exception — local running celebrity Michael Wardian.

“I mean, he’s a machine, so if I was going to follow any stranger, it made sense to follow him,” he said.

RunWashington has a Strava club

During a trip to Orlando earlier this year, Brusso struggled to find running routes, ultimately resorting to loops around the shuttle entrance for Disney World.

“After syncing my watch I saw that I ran a segment that ranked me second out of the people I was following.” How was that possible, he wondered.

“I click the link and then I see it — Michael Wardian. He’s everywhere.”

Another Strava plus: DC’s straight streets provide an advantage for athletes looking to send a message. On Inauguration Day this year, a cyclist used a 12-mile route to spell out “THANKS OBAMA” between Chinatown and Columbia Heights.

Tracking about 10 new activities worldwide each second, Strava is also known for making its data available for analytic side projects, which it features on its website under the name Strava Labs. In February, a Runner’s World article compiled 40 of the most popular running routes in 20 U.S. cities based on Strava data. Not surprisingly, the National Mall and Rock Creek Park made the top of the list in D.C.

Another Strava project, The Roster, allows users to visually analyze their group activities and training partners. It’s like a personality quiz for runners who want to know whether they’re a “Lone Wolf” or “Social Butterfly.”

Perhaps one of Strava Labs’ most amusing options, Flyby, offers a playback option where users can see who was running or biking nearby during a workout. Amanda Hicks says this feature helped her make friends with athletes who often crossed paths with her in her morning runs. Jeff Redfern tried to use it to track down a cyclist that had swerved at him at high speeds during one run. Redfern also started a club page on the app for his running team, Dojo of Pain, which team co-founder Daniel Yi says has helped teammates stay connected when they can’t make it out to workouts.

The competitive spirit on Strava is fueled by features that allow athletes to give kudos on each other’s workouts and set CRs, or course records, on segments created by users. Athletes who lose a CR receive the dreaded “Uh oh!” email from Strava. “Got what it takes to reclaim your crown?” the message goads.

RunWashington contributor Jen Maranzano avoids using the app even though she has an account. “I worry that I would start focusing too much on what other people are doing as opposed to just trusting my own training,” she said.

“I’m a sucker for course records on Strava,” said Hicks, who currently has more than 120 D.C.-area course records. “The pursuit of a CR has taken me to routes I otherwise wouldn’t have tried, especially when I travel.

“The downside of making my workouts public is I have had people I don’t know in real life make pretty harsh comments on Strava about my training,” she said. Hicks made her entries private for a little less than a month after that, which helped take the edge off the negative side of Strava.

It’s not all cutthroat, though. Julie Dickerson follows Hicks on Strava, and even though they have never met in person, Hicks congratulated Dickerson on the app when she grabbed the CR on a segment near Piney Branch Parkway.

“This sense of community and recognition of our common striving to be better runners felt really good,” Dickerson said.

Recently, she and her running friends Liz Lauzon and Caroline Mosley decided to pursue CRs for added motivation through the hot summer months. Lauzon joined the quest from Mexico: “I love that Strava has created a community where we can follow each other’s efforts no matter where we are located–I know Julie and Caroline cheer me on, and I do the same for them!”

Dickerson says their quest has been successful so far and she’s setting their sights on the overall record (“Watch out, men!” she says) for the 16th Street hill.

In late June, things got a little intense. D.C. opened the Klingle Valley Trail, a three-quarter-mile paved route that stretches from Woodley Park to Rock Creek Park on what was, for decades, a broken down road. The Strava community got to work almost immediately.

Hicks, who lives close to the trail, created the half-mile Strava segment “Giddy up Klingle” for the path. She loves hills, so the 5 percent elevation grade plays to her strengths.

Then Dickerson and Mosley added Klingle to their CR hunt. When they ran the path together, Dickerson momentarily wrested the CR from Hicks by one second. Kerry Allen claimed the crown in mid-July, but Dickerson carved 20 seconds off the record the next day, which put her in the overall top three Klingle finishers.

On the men’s side, Georgetown Running Club teammates Kyle Wagener and Lukasz Olenginski gap the rest of the field, along with Matt Psaltakis.

“I plan to try to reclaim the Klingle crown,” Hicks said. “It might not hold for long because we have a ton of fast ladies around here. We’ll see how low the record can go this fall.”

Dickerson sees it as an opportunity for women to rise in the race for the overall crown with male runners. “Hopefully we can push each other further up on that list,” Dickerson said. 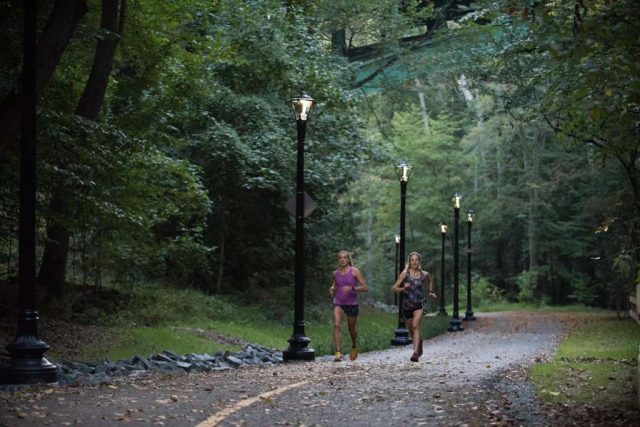