Rich Mendelowitz sat in a doctor’s office looking at a picture of his brain. The photo lit up on the left side, healthy and full of arteries.

But, the right side was totally blank.

Mendelowitz, 59, was completely in shock. He’s the president of DC Road Runners and has run 2,000 miles per year for most of his life – and doctors told him that’s why he wasn’t already dead.

“The only reason I was alive was because of my fitness and running,” the Arlington runner said.

Mendelowitz was at a routine eye exam in December 2016 when the doctor noticed his right eyelid was drooping and sent him to a neurologist for follow up. The neurologist ordered a MRI angiogram of his brain and Mendelowitz left the office expecting to hear back that results were normal in a few weeks.

“You know you’re in trouble when the doctor calls you at 5 p.m. the night you took the test,” he said. “The doctor said: I have your results and it’s serious. We need to talk about it right now.”

Doctors discovered that he had developed a vascular condition that caused a blockage in his right middle cerebral artery, killing off about 40 percent of the artery structure on the right side of his brain.

As doctors tried to determine what had caused the problem, they discovered that he had heart disease. A block of his left renal artery, which supplies the kidney with blood, required surgery, suggesting he had a broader vascular disease.

Despite the serious diagnosis, doctors urged Mendelowitz to stay active.

“In the middle of it, they keep saying, you have to keep running. Don’t change anything, keep doing what you’re doing, because that’s the only reason you’re alive,” he said.

His perfect cholesterol helped dramatically, too.

He hopes people will prioritize their own fitness after hearing his story.

That message is one that’s easy for Mendelowitz to pass along, given his long passion for the sport.

Running has been a part of his life for almost four decades. Mendelowitz started running during college at the University of Michigan, when a girl he was dating would run to stay in shape for soccer season.

“I was worried about guys moving in, so I ran with her,” he said.

But soon, he was hooked all on his own. He started running with roommates as well and got talked into his first race, a seven-mile run on Memorial Day in 1979.

As he continued running, regularly placing in his age group, he set out on a quest to qualify for the Boston Marathon, a goal he accomplished in 1988, completing a 2:50 marathon after multiple failed attempts that taught him a lot about the distance.

Following that race he took a 20-year break from marathoning. He focused his attention on his family and young children. Once they grew up, the marathon bug bit him again.

He turned back to long-distance running in 2009, when he ran the Marine Corps Marathon to try to qualify for Boston as a 50-year-old. But he fell far short, calling it “by far the worst race of my life.”

The failed attempt pushed him to consider joining a running group to improve his training, and he began running with DC Road Runners. At the Marine Corps Marathon in 2010, he achieved his goal of qualifying for the Boston Marathon. In 2015, he did it again.

Since his diagnosis, which doctors told him is incurable but treatable, Mendelowitz has focused on staying active however he can. Yet while running keeps him alive, it also wreaks havoc on his back. The drawback to his lifetime of running is four degenerated discs in his lower back.

“The only reason I’m alive is due to running and fitness. At the same time the spine doctor is saying well I don’t think long distance running is in your future any time soon,” he said.

That’s been tough on Mendelowitz, who calls running his top passion in life, outside of his wife and kids. He founded and led a 10-mile group run every Monday morning for the past five years, and he participated in D.C. Road Runners’ long runs each weekend. He coaches the group on the track on Thursdays and has served as the group’s president for the last three years, a role from which he will soon step down.

After receiving spinal injections to help control the pain, the spine doctor capped his running at five miles a day and said he might be able to pursue one more marathon training cycle in his life if things go right.

In the meantime, Mendelowitz has substituted about two hours of pool running for hitting the pavement on his weekend long run and his Monday morning 10-mile run has been cut to single digits.

The change in fitness schedule has had a huge impact on his social life.

“It feels sort of empty not being able to do that,” he said of having to give up the 10-mile run group he founded. “But I just evolved to ‘Okay, what can I do on Monday morning?’ If it’s a two- or three- or four-mile run, that’s what I’ll do….but I was alone, and it was really lonely and it’s still really lonely.”

“I know hundreds of people. Most of them are runners in Arlington. So, most mornings if I see someone out running, I know them and get to yell and say hi, but I’m not with my friends,” he added.

He’s also not giving up his days at the track, even if he can’t run alongside his friends right now.

“I’m there running the stop watch and screaming at people,” he said. 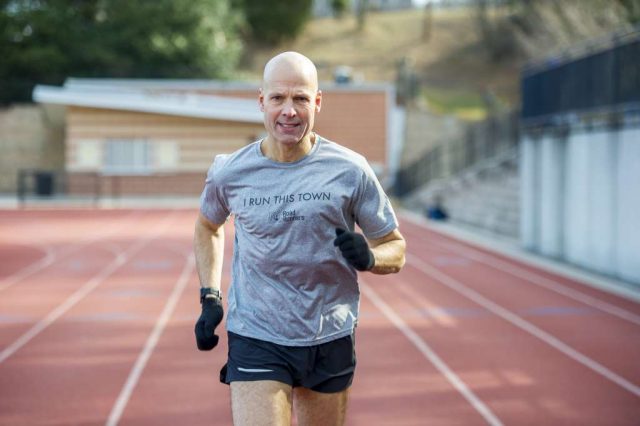