The two biggest local marathons claimed the most local finishers, including the winners.

That all adds up to 369,184.2 miles of racing, not counting extra distance tacked on when runners didn’t hit the tangents.

More than half of those finishes (7,615) came at a race within an hour’s drive of downtown Washington, D.C.

A conservative estimate puts our total in race entry fees at $2.3 million.

Almost 200 of those races did not include residence data for finishers, so these numbers are almost certainly higher. If you ran in a race that isn’t noted for having a local finisher, comment and let us know.

Of the 291 races that had finisher residence data:

Those finishers came from

These statistics were based on results available on Marathon Guide, with more detailed information coming from individual race result websites and special assistance from Sheila Sutton, Anna Newcomb, Bart Rein, Francesca Conte, Kae Thompson and Lowell Ladd. Breaking3, conducted entirely to allow Chris Farley to run a sub-3 hour marathon, was not included in Marathon Guide’s results, and was not an officially sanctioned event, but I included it anyway.

We had finishers in every state, but Iowa only had one finisher, Silver Spring’s Adam Lazarus, who was third overall.. He did win the BG26.2 in Kentucky.

Thirty-nine times, a local runner won. Once, a local runner was the only entrant. Thirty-four different locals won a marathon, with Desta Morkama winning four, and Tyler Andrews and Mike Wardian both winning two. All are from Arlington. Morkama and Sarah Bishop won Marine Corps, which had 5,378 local finishers, and Sam Doud and Christie Wetzel won Rock ‘n’ Roll D.C., which had 1,093 local finishers. 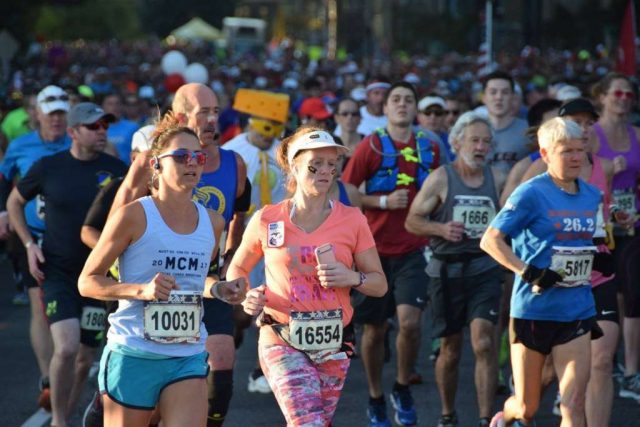