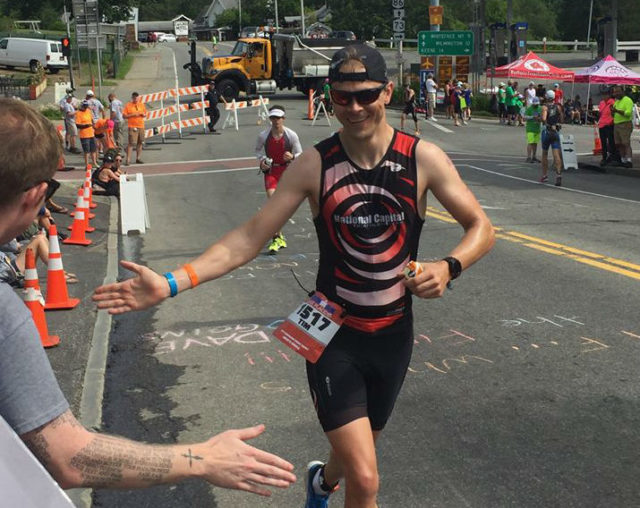 Why you run: I love it – both competitively and recreationally – and, it makes me feel good. I also love the outdoors and exploring, so running is a great way to combine the two.

When did you get started running: After college. I ran the Disneyland Half Marathon at the encouragement of my older brother. My goal was to beat him … I did, but he’s also 12 years older than me … We’re competitive, and I knew if he beat me, he would hold that over me given how much younger I am. After the half, I ran the Los Angeles Marathon. However, I started running regularly after moving to D.C. and meeting the Pacers 14th Street Fun Runs.

Have you taken a break from running: Not really … However, I started doing triathlons five years ago, and I love mixing in the two additional sports to break things up from time to time. I also think it has made me a stronger runner and helps me avoid injuries.

Coach or training group: Pacers 14th Street Fun Runs, YTri, and the P and 15th Street Saturday run group – I meet so many amazing people from there; made great friends; and gone on many adventures with them!

The hardest race you’ve ever run: Boston 2016. It was my first time running it, and I was trying to go for a PR … that did not happen. It was hot, but also a harder course than I expected, and I ended up walking quite a bit. I was excited to finish, but also pretty disappointed with my performance. I ran Boston again this year, and the conditions were miserable – 30 degrees, torrential downpour, and 40 MPH winds. It was another mentally and physically tough race, but this time, having learned from experience, I ran a much better race. #redemption

Most adventurous decision you’ve made with your running: I always try to push myself further and to see how far I can take myself. After several years of half and full marathons, Olympic and half-iron triathlons, I completed my first Ironman at Lake Placid. It was awesome, and I will do another one.

Running mentors: My running and triathlon friends. They are all uniquely inspiring, and I love seeing them all preserving and achieving their goals. I learn something, and draw motivation, from each of them.

My favorite place to run in the D.C. area is: Rock Creek Park and anything involving the Klingle Trail (That’s now my favorite hill in D.C.)

My best race was: Chicago Marathon 2014 and 2016. Both times I set my marathon PR there and qualified for Boston. Moreover, many of my friends ran as well, or were there spectating making both times memorable experiences.

Goals: I want to break 2:45:00 to qualify for the Tokyo and Berlin Marathon. So far, among the Abbott World Marathon Majors, I ran Chicago and Boston, and I am running New York this fall. I qualified for each of those marathons, and I got my eyes set on doing the same for Tokyo and Berlin. Technically, I qualified for London, but they only allow qualifying time for U.K. residents – so for now, I will keep adding my name to the lottery.

Your advice for a new runner: Join a running group. Also, run strong, run smart, run with heart, smile, and have fun.

Favorite running book: What I Talk About When I Talk About Running by Haruki Murakami; The Last Pick: The Boston Marathon Race Director’s Road to Success by David McGillivray; The Perfect Mile by Neal Bascomb.

Song in your head during a run: Oh there are many … but a few include, Defying Gravity from the musical Wicked, How Far I’ll Go from Moana, and Till I Collapse by Eminem (that’s my pump-up song before every race).

Have you dealt with a major injury: During training for my first marathon, I had runners knee and did not run for about a month. Fortunately, I’ve not had any other major injuries which I think is partially attributed to the triathlon training and strength training that I do.

Running quote: “My time, the rank I attain, my outward appearance – all of these are secondary. For a runner like me, what’s really important is reaching the goal I set myself, under my own power. I give it everything I have, endure what needs enduring, and am able, in my own way, to be satisfied.” – Haruki Murakami “Run the mile you are in.” – Rachel Tulchin

Why is the D.C. area a great place to be a runner: D.C has many great trails and you are so close to nature. Also, the running and triathlon community is wonderful and so supportive.