Three years ago, we introduced the running community to Matthew Hua, a runner at J.E.B. Stuart High School who would not allow his unique medical condition slow him down. In the time since, Matthew has proven unstoppable. In fact, within four days, Matthew hosted a dinner for the many champions who’ve supported him and his family over the years, graduated from Stuart with an international baccalaureate diploma and underwent surgery to further improve his breathing capacity.

RunWashington caught up with Matthew and several of his champions to find out what has changed in his life since 2015, and how running has changed him.

First and foremost, Matthew still runs — he was part of JV cross country all four years at Stuart, and sprinted for the track team through his junior year.

“Matt had phenomenal success as a freshman in spite of his physical limitations,” says coach Ron Kronlage via email. “As a sophomore, he improved his 5k times by over a minute from his freshman year, but was often disappointed that he couldn’t compete for Stuart at the varsity level.”

Injury and medical obligations tempered Matthew’s performance, but they never dampened his spirit. For two years, he organized the teambuilding game Blammo, which knit the cross country team together at the start of each school year. In the summer of 2016, he began volunteering with Kronlage’s feeder program at Glasgow Middle School, where they led junior high students in running exercises to pique their interest in cross country. Matthew continued to find joy in feeling the wind in his face and knowing his body was getting stronger with each run.

“I knew I wasn’t going to college for running. I knew running is fun for me….” he says. “If I’m going to run, I want to enjoy it.”

Reflecting on this time, Matthew’s father, Dieu notes, “From my perspective, [cross country] was always work for everybody. But it seemed like freshman and sophomore year was more, it was always work, hard work, running was tough, and the fun came from the Blammo game and the camaraderie and the teambuilding. Whereas now, it’s still work, but running is also fun.”

Kronlage admits that last fall’s promising team struggled with injuries and depth, and they were disappointed to finish the season second in their district and fail to advance to the state meet.

“But when [we] look at a cheerful Matt crossing the finish line at the JV District Championship/Festival, we can see that cross country is about more than winning championships, and we can see that there are many winners.  Matt is a winner,” he writes. 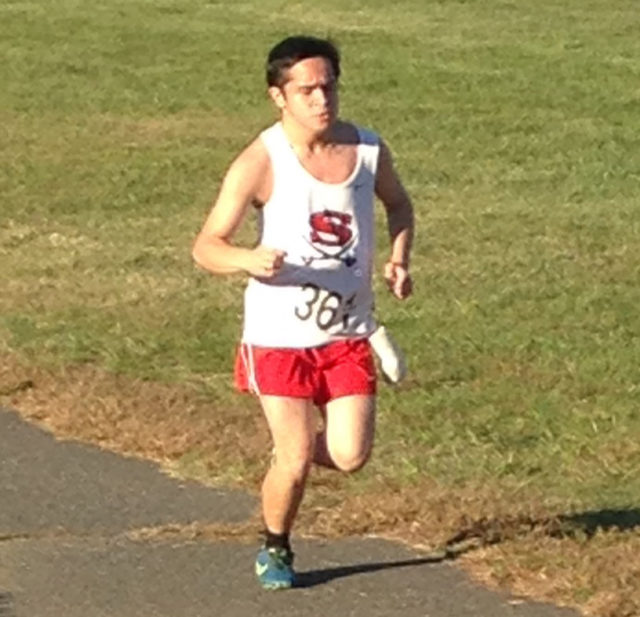 The decision to forego track in his senior year did not come easily, and Matthew attributes it to wanting to focus on school and college applications. But he took advantage of other opportunities in his typical, tireless fashion. In the summer of 2017, Matthew participated in the Virginia Boys State, a weeklong program led by the The American Legion that teaches young men about government and civic engagement. Participants form political parties and hold conventions and elections to choose a governor, lieutenant governor, and attorney general. They also hear from local leaders and politicians about careers in public service. From over 700 boys, Matthew was elected attorney general on the promise that, as when soldiers in the U.S. Army and Air Force cry “Hooah,” his constituents would be “Heard, Understood, Acknowledged.”

This spring, he was selected to play violin in the orchestra for the school musical, The Little Mermaid–an achievement made more meaningful because he spent years developing the upper body strength needed to support the instrument through hours of rehearsals and performances.

And in April, he drew from his own experience with the Make a Wish foundation and used his position as president of the National Honor Society to lead a fundraising campaign for other children who face significant medical challenges. His team set an ambitious goal of raising $2,000 in one week. By the end of “Wish Week,” they had covered a school corridor with paper stars bought by donors, held a “penny war” between classes for the chance to pie the principal, smashed their initial goal, and persuaded Principal Penny Gros to dye her hair if they doubled their initial goal. On prom night, April 27, Gros tweeted a photo of herself sporting rainbow hair. Matthew and his classmates had raised $4,100 in one whirlwind week.

And he accomplished all this while completing his IB coursework and applying to top-tier colleges and universities.

The Hua family viewed high school as a training ground for Matthew to learn to be independent, so that he could attend college and live autonomously. While a private-duty nurse accompanied him to school and after-school activities, his parents began teaching Matthew to care for himself during the day, and continued attending his cross country meets.

Dieu compares Matthew’s medical journey to his cross country experience. “It’s kind of like going back in time when he was preparing and saying, ‘I want to run’ but then walking the first mile, running the first mile, and then slowly building up.” They worked with his teachers and coaches, explaining his needs and the coming changes, and each evening, they helped prepare Matthew for the following school day.

“He was insistent that he could be independent,” recalls Gros, who first met Matthew as his middle-school principal in 2013 and who also started at Stuart in 2014. “He had to convince his doctors and the Fairfax County Health Department, and the school staff, that this is something that he could do on his own. And I just think, more than anything, I’ve learned over the past couple of years in particular that if there’s something that Matthew wants to do, he’s going to accomplish it.”

Since January of 2017, Matthew has attended school and his extracurricular activities alone, taking care of his own medical needs throughout the day.

“I would say the fact that I haven’t had a nurse is very humbling as it shows a lot of people have trust in me, and I think that also gives me more confidence in interacting with adults,” he says. “But the fact that I didn’t have nursing meant I was accountable to myself for my actions.” Though he had more flexibility and control over his day, the risk of a mistake were heightened.

“I know there are times he would like to avoid some of his medical care, but I think he’s learned that he does that at his own detriment, because if you don’t do it, you will feel the adverse effects later that day or maybe the following day. I think he’s done a really good job on that,”  says his mother, Lori-Beth.

His surgery this week is expected to improve his breathing capacity and he hopes to be fully recovered by the start of the next school year, when he will attend Georgetown University. He plans to major in Government, and aspires to attend law school and return to Virginia as a practicing attorney. Given his history of achieving the things he sets his mind to, it’s not hard to envision his upcoming success. And he attributes many of his accomplishments to the persistence he learned in his first season of cross country.

He recalls, “When I was writing the [college application] essays and just realizing how much cross country has done for me, and how much it has meant for me… it’s humbling, and it’s very sometimes surprising that I can’t write an essay without putting, ‘Because of cross country’ or ‘Because of what I did here, it enabled me…'”

“There’s lots of kids that do cross country and it’s hard to stick it out,” says Gros. “To be committed to a sport like that and to be doing that on top of having a medical challenge that you’re dealing with every single day. I think again, it just speaks to, there is nothing that that kid [Matthew] is not going to accomplish.” She feels fortunate to have worked so closely with him over the years, and will miss his daily greetings in the halls.

“I see him almost every single day and there’s just always a smile, always a ‘How’s your day going?’ He’s always concerned and thinking about someone else. And again, that is so rare among [teenagers],” she says.

His team will feel also his absence.  “Matthew Hua is a first-class person of the highest character. We will miss his optimism, positivity, and respect for others that he carries with him everywhere he goes,” writes Coach Kronlage.

Fortunately, Matthew will remain part of the D.C. running community. He hopes to continue running casually in college, and perhaps play ultimate frisbee or another club sport.

“It’ll help me stay in shape and maintain my health so that I can see my breathing improve and I can run,” he says. “If I need to, I can run from class to class, just in case. If I’m running out of time.”

Tweets by RunWashington
More Stories
Monumental Runner – Katie MorganWhere to get a drink on a run around D.C.