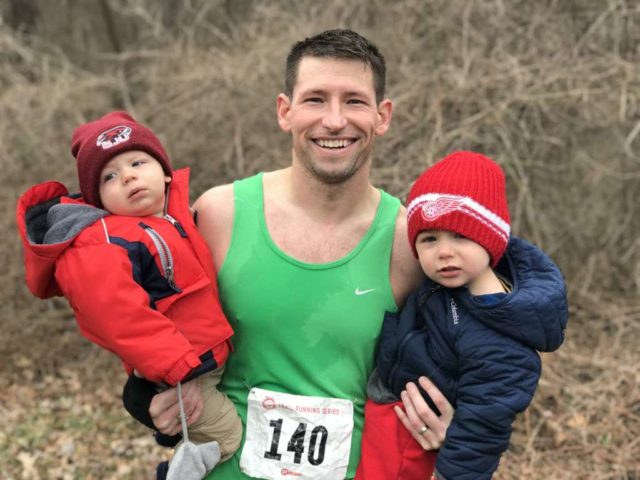 Volunteer roles in the running world: I’m one of the few that can claim membership in the old Pacers Ambassador program. That was a long time ago and I haven’t volunteered a lot since then…that needs to change. I did coach the Boys on the Run program at the Grace Episcopal Elementary School for 5+ years which was a lot of fun.

Why you run: Mostly to race and compete against others but I’m always challenging myself as well. As we get older, beating our old selves becomes more and more of an obsession. Running is also my time to decompress and escape for a bit.

When did you get started running: I tried every sport in the book but nothing really caught on. A high school friend suggested I come out for the track team so I did that my sophomore year. I ran my first XC season that fall of my junior year and the rest is history.

Have you taken a break from running: My first two years of college I really didn’t run much at all and instead spent more time with weights in the gym and playing rugby. The rugby guys liked me because I had endurance and didn’t drink which meant there was at least one sober player at our matches.

Coach or training group: I’ve always been self coached but I’ve run a few times with D.C. Road Runners and Potomac Runners. Now that I’ve “retired” after 15 years of coaching high school, I now coach runners and triathletes through Mile Zero Multisport.

The hardest race you’ve ever run: Williamsburg 70.3 back in 2015. It was my first attempt at the Half Iron distance and the race took place on an extremely hot weekend in June. The swim was in 80 degree water and it was close to 100 degrees when I got on the bike. 56 miles later I started the half marathon and the run course didn’t have much shade at all. Basically turned into a death march but I told myself the whole time I wasn’t going to drop out and I didn’t.

Most adventurous decision you’ve made with your running: Aside from dipping my toes in the triathlon/duathlon world, that would probably be my decision to sign up to do the Dopey Challenge while my wife and I were on our honeymoon in Disney World. To complete the challenge you have to finish a 5K, 10K, half marathon, and full marathon over the course of four consecutive days. I went into the races undertrained but made it through in one piece. Hardest part by far was getting up every morning at 3am just to hurry up and wait for the races to start.

Running mentors: My dad will tell you that he wasn’t a great runner but I always hope that he’s proud of my running career. Coaching-wise, it has to be one of my coaches from high school, Vera Ziherman. She competed for the Soviet Union in the 800m at the 1980 Summer Olympics so you know she was a “no BS”, tough as nails lady. She hit me with crazy workouts but they got results. I knew it was going to be a hard day when I showed up to practice and she said to me in her Russian accent, “Brad…I kill you today”. No lie!

My favorite place to run in the D.C. area is:  Anywhere along the Mt. Vernon/Parkway trail. I live two blocks from the south end and I love it

Favorite local trail:  I love running/racing anywhere within the Hemlock/Fountainhead park area. It makes you feel like you’re hours away from everything

My best race was: Probably the 2011 Marine Corps Marathon and not because it was a good race for me. It was my first marathon and I can’t say that I prepared properly. I think my longest run was only 16 miles and I never practiced taking any nutrition because I thought that I would get GI issues if I refueled too much during the race. So I’m flying through the first 10+ miles because of the crowd and I’m running a lot faster than my goal pace. I felt great. The first time I ate/drank ANYTHING wasn’t until mile 14 or 15 so you know how this story goes. While I ran the first half in 1:30 or maybe a little faster than that, my second half ended up taking almost two hours because of bonking and cramping issues. I got very lightheaded and my legs would hardly move for the last 4 miles or so. I don’t even remember the last mile, including the hill up to Iwo Jima. I consider this one of my best races because I learned SO much before, during, and after that race about what to do differently if I wanted to improve. Personally, I’ve never really learned anything significant from a good race. I’ve always learned so much more from the bad races I’ve had.

Ideal post-run meal: Pancakes. Specifically, after a great run or race I love going to Murphy’s or Table Talk in Alexandria for brunch

Favorite flavor of gel, gu, etc: Vanilla Orange by Boom! Nutrition and I love me some Chocolate Stinger Waffles

Pet peeve: Distracted drivers (been tapped too many times crossing intersections) and runners/cyclists/walkers that don’t understand the meaning of the yellow line on our paved trails

Goals: To eventually qualify for Boston. I’d like to run a sub-5 minute mile after I turn 40. As a triathlete, I’d love to qualify for Kona but it’s extremely hard to do so in my age group. Actually, it doesn’t become much “easier” until you’re in the 50+ age groups. So, I told my wife that I’m on the “20 year plan” for Kona. I’ll just stay in shape until I’m in my 50s and then I’ll make a push to qualify once the kids are grown up and I have more time to train. At least that’s what I tell myself now

Your advice for a new runner:  In my years of coaching, I would say that consistency is the most important aspect of a good training plan and that should set you up to improve while remaining injury free. We’re also exposed to a lot more now than ever because of social media and what not. A lot of people see what everyone else is doing and they feel like they need to emulate their mileage, workouts, races, etc. Find what works for you personally and focus on that. Some people like to run 100+ miles a week, some max out at 30. Some race ultras, others love 5Ks. In the end, you’re running and that’s all that matters.

Favorite running book: Lore of Running by Dr. Tim Noakes. I call it the runner’s bible

Song in your head during a run: I don’t listen to music while I run but the songs that pass through my head are usually something by The Doors or The Who. Occasionally, “Baby Shark” will make an appearance…ugh.

Have you dealt with a major injury: I’ve had almost every running related injury aside from a stress fracture. The past few years it had been achilles issues but they disappeared once I took up cycling (knock on wood).

Why is the D.C. area a great place to be a runner:  It’s basically a melting pot for all things running and racing. One weekend you can be racing a 5K and the next you can be in the middle of an ultra. If you like paved trails we’ve got multiple options or if you want to hit some singletrack in the middle of nowhere, the D.C. area has you covered. The D.C. metro area attracts so many people from all over the country (and world) that you can always find someone to run with that shares your running interests. It’s also very competitive around here so you’ve always got to be on top of your game. With so many races, running groups, and trails in the area, it’s hard to not get involved with something.

More Stories
How a former D.C. runner broke through to make the Olympic marathon trialsWinter’s over, right?