Hidden between the Palisades neighborhood and Canal Road, a carpet of grass awaits.

The long-gone Glen Echo Trolley Line, which ran between the eponymous amusement park and Georgetown, offers two-plus miles of off-pavement running with a view.

Oddly enough, a lot of that view is of the C&O Canal Towpath and the Capital Crescent Trail down the hill, an embarrassment of riches running east and west in that part of town.

Burleith resident Cabell Willis appreciates the area trails’ nuances and has a soft spot for the the Palisades Trolley Trail, or “power lines,” as he calls it.

“One of the reasons I came to D.C. was the access to trails,” said Willis. “But I didn’t find it until I had lived there for a year. I fell in love with it right away.”

“The towpath is fine but it gets old,” he said. “The Capital Crescent is crowded. But I don’t think I’ve seen anyone else running ‘power lines.’

“It’s not frequented and I don’t know why. It’s a great spot.”

He may see more there. The District Department of Transportation is conducting a feasibility study with an eye toward developing a multi-use trail. The department is also studying the feasibility of rehabilitating the aging Foundry Branch trestle, which has deteriorated to the point where the Glover Archbold Trail below has been closed and fenced off.

I typically pick up the trail on the west end, off of Galena Place, between Sherier Place and Dorsett Place. A narrow path crosses a bridge over Arizona Ave, then leads to the Palisades Playground. Heading east, you’ll cross Chain Bridge Road and eventually into some rocky trails. When you see a large tree with a hollow base, you can turn left and climb to MacArthur Boulevard and the bottom of the Battery Kemble Trail, or hang right and down the hill, past a small bridge and over a few rocks across a creek.

You’ll pop out on Reservoir Road. Look both ways and cross, heading to the left up the hill but looking for the trail to pick up again. It’s pretty technical for a few seconds, but then you emerge on a long grassy stretch along the Georgetown Reservoir. You’ll wind up on Potomac Avenue. You can either turn left onto Q Street and a right onto Clark, or run to the edge of Potomac and climb down a perilous series of rocks. Uphill from Clark Street’s intersection with Canal Road, there’s a faint dirt trail that leads into some bamboo. Follow that onto another grassy stretch that leads to Foxhall Road. 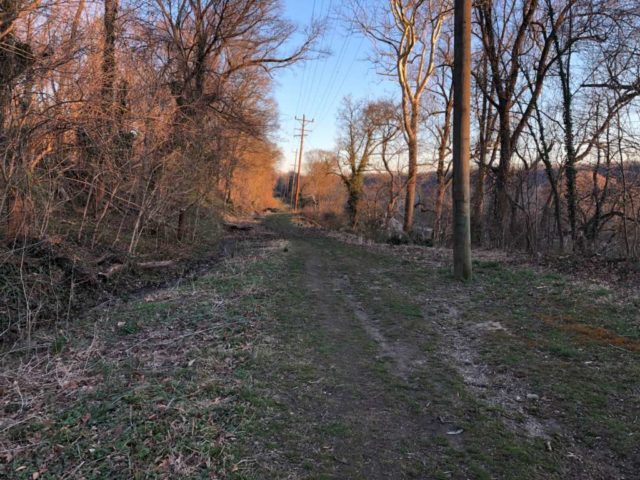 Whether this trail would be better served with more development is up for debate. At an early-March meeting to discuss the feasibility study some neighbors voiced a desire to improve the trail, which drains poorly, to be usable in all conditions. Others wanted nothing to do with more traffic in the neighborhood. And don’t get anyone started on the trestle…

Tweets by RunWashington
More Stories
College runners find friendship, competition through club runningWhat happens to all of those bananas? How races are evolving to become more eco-friendly events