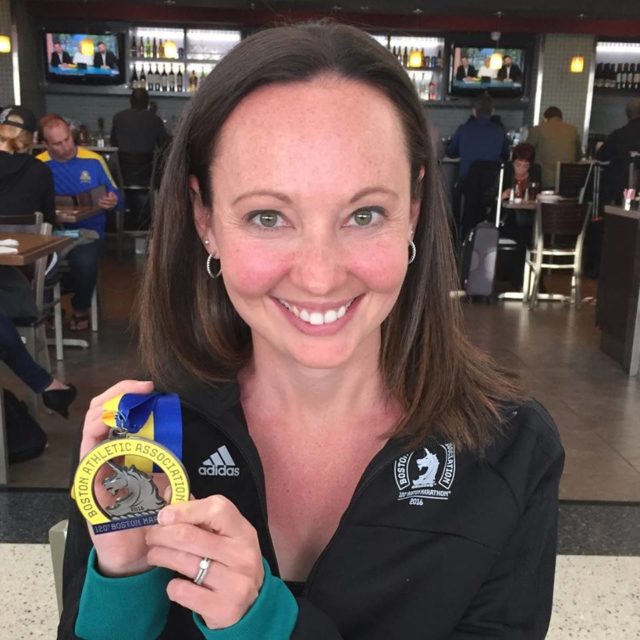 Volunteer roles in the running world: I have been involved with Girls on the Run, and I spend a lot of time mentoring fellow runners and pacing them in races.

Why you run: In my high-stress life, running is the one part that is completely mine. I (half) joke that my runs are often the only time I get to myself all day long. Running started as, and remains, an outlet for me.  I love that I can customize every run to what I need on any given day.  If I’m super stressed and just need to find some peace, I can run easy.  If something really got under my skin that day, I can throw on some angry music and push my limits with speed work or hill repeats.  I always return from a run in a better state of mind than when I left, and I never get less out of it than I put in.

When did you get started running: In the Spring of 2004, so I’ve been running over 15 years now.

Have you taken a break from running:  Over the years I’ve take a few breaks due to injuries, but I never stay away for longer than I am forced to.  I become very cranky when I can’t run; just ask my husband and co-workers!

Coach or training group: Not since I trained for my first marathon with the National AIDS Marathon Training Program in 2004.  I’m mostly a solo runner.  I like the solitude and time to myself.

The hardest race you’ve ever run: Boston 2018.  I felt completely undertrained because I was coming off an injury, and the weather was horrendous.  Unseasonably cold temperatures, torrential rain, a relentless headwind…it was a nightmare.  It was one of those races that mentally, emotionally, and physically breaks you down mile by mile.  However, I was proud and humbled to run it beside my husband, who was doing it in my honor by raising money for the Dana-Farber Cancer Institute, so it was also one of the best and most rewarding races I’ve ever run.

Most adventurous decision you’ve made with your running: I think the way I stared running was pretty adventurous (or crazy, depending on how you look at it).  I was in my first year of law school and desperately needed a non-academic outlet.  On a total whim, I signed up to run the 2004 Marine Corps Marathon through a charity training program.  I had never run before in my entire life, and my first ever race was a marathon.  Because, why not?  I fell in love with running in the process. I also met the man who is now my husband.  Best crazy decision I ever made.

Running mentors: Kara Goucher and Des Linden.  Kara is such an inspiration to women, regardless of whether they are runners or not.  And Des is so down to earth, resilient, and real.  “Keep Showing Up” has become my mantra.

My favorite place to run in the D.C. area is:  It sounds so cliché, but running in D.C. never gets old. Georgetown, old town Alexandria, Rock Creek, the Mount Vernon Trail, Hains Point and West Potomac Park, the Mall. I love it all!

Favorite local trail: the Mount Vernon trail (starting from Gravelly Point) or Rock Creek Park trail (especially when I get to swing through the zoo)

My best race was: It’s a toss-up between the 2013 Marine Corps Marathon, which was the first time I qualified for Boston, and Boston 2015, which was the first time I actually got to run Boston.  Qualifying for Boston was one of those outlandish goals that I really wasn’t sure I’d ever be able to achieve.  I poured my heart and soul into it, and all my hard work ultimately paid off.  It was an amazing feeling.  The 2018 Marine Corps Marathon gets an honorable mention as my PR marathon and one of those magical races during which everything – my training, the weather, the crowds, etc. – came together perfectly.

Ideal post-run meal:  Does coffee count?  The promise of coffee is often the only thing that gets me through the last few miles of a long training run!

Favorite flavor of gel, gu, etc:  Tri Berry Gu (in the summer) or Salted Caramel Gu (in the winter)

Pet peeve: Tourists in general.  Anyone who doesn’t follow proper trail etiquette. Runners who don’t appropriately seed themselves at the start of races or who run with someone else’s bib.

Your advice for a new runner:  Take it slow, but stick with it.  These days, it’s easy to get caught up in the social media aspect of running and try to do too much, too soon because it seems like what everyone else is doing.  Running marathons – or any specific distance – doesn’t make you a “runner.”  You are a runner as soon as you lace up your shoes and get out the door.  It doesn’t matter how far or fast you go.  Figure out what works for you and just keep at it.  As Des says, “keep showing up.”  I promise it stops hurting so much. Eventually. Most of the time, anyway.

Favorite running book: Once a Runner by John L. Parker Jr., Strong by Kara Goucher, How Bad Do You Want It? by Matt Fitzgerald

Song in your head during a run: It is entirely dependent on the run/workout I am doing.  I have completely different playlists for long runs, tempo runs, speed work, hill repeats, races, etc.

Have you dealt with a major injury: A number of stress fractures over the years, the most painful being in my femur.

Running quote:  “Running to him was real; the way he did it the realest thing he knew. It was all joy and woe, hard as diamond; it made him weary beyond comprehension. But it also made him free.”  John L. Parker Jr., Once a Runner.  Oh, and Barney Stinson (in How I Met Your Mother) on how to run a marathon: “Step one: you start running.  There is no step two.”

Why is the D.C. area a great place to be a runner: This is such an active town.  We have lots of great races, great places to run, and an amazing running community.  In my biased opinion, nowhere else holds a candle to it.