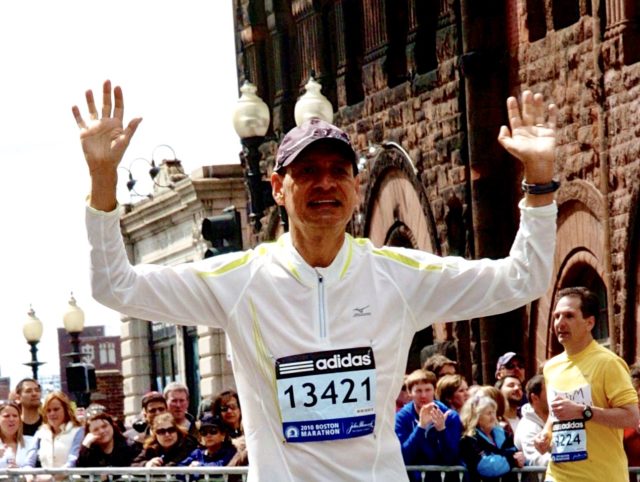 Why you run: The usual! Fitness, mental sanity, longevity. This is thoroughly for lifestyle reasons, as I don‘t have a single competitive bone in my body, and rarely run in organized events (and then overwhelmingly marathons, for the course support.) I‘d rather run alone with my thoughts—for a long time!

When did you get started running: 1969, when I was 12. That is when I can remember consistently going out for runs of my own volition, and consciously identifying as a runner (though I can remember as far back as third grade—9 years old—just loving the feeling of running around the schoolyard during recess. I think that‘s normal. I‘ve just never lost that enjoyment. (OK, the truth is that I was chasing Lucero Saldaña, who was cute as a button, and I‘m sure neither of us knew what would happen if I caught her. Fortunately, she was speedy and I never got any closer than she wanted!)

Have you taken a break from running: Twice, enforced. First in 1988, during the last 3 months of pushing to finish my dissertation. Not only did I not run, I didn‘t eat or sleep much during that period (I had a job pending, conditional on finishing that degree!) It was the unhealthiest period of my life. Then again in 2017. I had been running 80 miles a week and was suddenly felled to zero. The short version: prostate cancer initially misdiagnosed as prostatitis led to an ill-fated prescription for Cipro, an antibiotic that all athletes need to approach with care—and only at last resort. Not knowing this, I blindly followed a nurse practitioner‘s advice and had a very bad reaction to this antibiotic. I was nearly paralyzed, barely able to walk, and unable to negotiate stairs or inclines, and have only slowly been recovering. As of this writing, I‘m back up to 30-mile-weeks (two minutes slower per mile), but glad to be shuffling, hopefully on the mend, even if excruciatingly slowly.

Training shoe: The minimalist trend of the oughts was not just a fad for me, so now that running shoes have become cushioned and bulky again, I‘m having trouble finding the right match. I wish ASICS had never stopped producing the Tarthers and HyperSpeeds, as they were the perfect combination of lightness and responsiveness for me. I still have a couple of pairs of Vibram Five Fingers, which I use occasionally (in the hopes of making them last forever!) I‘m currently mostly in Hoka Tracer 2s (whose durability has thoroughly impressed me), but I‘m still hopping around models (next: the ASICS Gel 451 and Brooks Cadence), trying to find the ideal, minimal “don‘t think about it” daily trainer.

The hardest race you’ve ever run: 2015 Marquette Marathon. This was a monument to dumb running. As often happens, the day began cool. I was fresh for the first half, and flew downhill through 16, but I was only fooling myself. As the day warmed and the course leveled out I got into serious trouble. Hills after that didn‘t help, and much less the last few miles on city streets that were broiler hot by the end. I was seriously humbled!

Most adventurous decision you’ve made with your running: Traveling to Sausalito, Calif. for business in March 2013 I learned that a couple of dear friends were running the Catalina Island Conservation Marathon that weekend. I flew to Los Angeles a day early, ran the marathon the next morning, then dashed to the airport to rejoin my business agenda in the Bay Area, having thoroughlyenjoyed the company and a completely unplanned and opportunistic marathon.

Running mentors: This has to be the group of running friends in Ames, Iowa, who got me to start running marathons (after a lifetime of solitary running.) Adam Davis and John Pleasants pointed out that I was running marathon training mileage, so I might as well run in an organized event. Rolf Koford modeled that you can start doing marathons at any age (one of his most memorable lines: “I love being around really fit people at marathons.“) Beth Henriksen‘s fluid, zippy running inspires me to this day to let the inner kid flow. Greg Courtney and Barb Wheeler, accomplished bikers and runners, showed me you can be impossibly busy and still invest in your fitness. And Kathleen and Jonathan Wendel, whose number of marathons and ultras I can‘t even track any longer have been a consistent font of inspiration and problem-solving knowledge. The most accomplished marathoner whom I know personally (Peter Bromka, 2:20) has encouraged me through his performances, his written reflections, and his thoroughly humble and unassuming commitment to improvement. And though I can‘t claim to know MebKeflezighi (I just happened to bump into him the morning after he won the 2014 Boston Marathon—I having finished more than 2 hours later!) His genuine interest in hearing about my run and his unaffected, self-effacing manner impressed me beyond description. I found his 2015 book “Meb for Mortals” to be a very useful and pragmatic guide to marathoning (very different from similar efforts by other elites, who—as Peter Bromka once told me—can‘t really explain to you why they can do the things they do.)

My favorite place to run in the D.C. area is: The dirt trails in north Rock Creek Park, where early in the morning you can have the woods all to yourself, hear the rushing water and birds chirping, surprise deer, meander across stream crossings, and enjoy the illusion that you‘re in remote country when in reality you‘re in the midst of a metropolitan cluster of over 6 million people! The long, lonely stretches of the soft C&O Canal dirt trail north of Fletchers Cove are a close second, for similar reasons.

Favorite local trail: From where I live, it is easy to put together a loop, combining the Intercounty Connector, Rock Creek and Matthew Henson trails, totaling 26.2 miles. Since the prettiest spot of the run involves a gravel trail around the west side of Lake Needwood, I think of it as my “Needwood Marathon.” For shorter daily runs, the Matthew Henson and Rock Creek trails are my usual bread and butter. Early in the day you have them all to yourself, and they are wooded, cool and protected from traffic.

My best race was: The 2012 Columbus Marathon, a 3:37 run. This is not the best because it was my “fastest” (such as it is, to date that has been the 2008 Detroit, a 3:32 run), but because it was a total surprise. I wasn‘t expecting much, primarily because it was in the middle of a busy two-week stretch on the road and I was harried and exhausted. During the week prior, we had finished packing up and moving out of a house in Michigan, then traveled 5 h hours to Columbus, ran the marathon, showered and traveled again for a conference that began that evening in Cinci. I still don‘t know how all of that happened, but I do remember the day being cool and crisp and feeling refreshing.

Ideal post-run meal: Pho. I‘m usually not hungry for a while after a marathon, so I force feed yogurt and chocolate milk for recovery when I‘m done. But two or three hours later, when I‘m ready, a big bowl of steaming pho is the ideal nutrient broth for deep recovery. Because of my line of work, I also love that an origin story for pho is that it was a way for poor Vietnamese farmers to make food scraps savory and edible, using nothing but field greens and water. Talk about eliminating food waste!

Favorite flavor of gel, gu, etc: Black Cherry Clif Bloks. Just the right balance of soluble sugar and tartness. I love that you can just place the bloks in your mouth, let them dissolve for graduated energy delivery, and you don‘t make a mess as with gels. I confess, however, that I‘m partial to Gu Espresso Love for the last 10 K of a marathon!

Pet peeve: Smokers!!! Yes, this has to do with running: it particularly irks me when they think they get a pass when they go outside to smoke. There they pollute everyone‘s air, forcing those of us watching out for our health to breathe toxins they‘ve already cycled through their carbonized lungs, or else to try to hold our breath until we get past them, or to detour as best as possible to avoid them and their nauseating shroud. Grrr!

Goals: A 3:30 marathon. Inspired by Masters runners such as Ed Whitlock and Gene Dykes, I‘ve not lost hope that in my 70s, when I can run to heart‘s content, I can hit this admittedly arbitrary milestone. I‘m also looking forward to long, long trail ultras!

Your advice for a new runner: Make it a lifestyle. Build your schedule around it to make sure it is going to happen, no matter what. For those days when it looks impossible, remember the old nostrums that if you can do this for you, then you can be your best self for everyone else in your life; that the single most important step is the first one that gets you out the door; that in difficult weather it always looks worse from the couch than it actually is (with the caveat that conditions must be safe for footing and visibility, of course!); and that you‘ll seldom come back from a run feeling worse than before you left.

Favorite running book: Very tough, but I‘ll make it Dean Karnazes‘ Ultramarathon Man. I was reading this at the time when I took up organized marathon running. There are so many lessons in this book, but what most spoke to me was the fact that you can just decide to get up from the couch and do epic things. A close second is Bernd Heinrich’s Why We Run.

Song in your head during a run: Rarely happens, as I‘m either working through problems or completely zen. However, on the rare occasion, it is whatever I‘m listening to at the moment, or stuff like the 1981 tunes “Don‘t Look Back” (Lenny White and Twennynine) and “Here Today, Gone Tomorrow” (Madagascar.) These are punchy, brassy, encouraging tunes with introspective lyrics.

Have you dealt with a major injury: In September 2011 I was pacing a friend through his first trail marathon at the North Country Trail Marathon in Manistee, MI. Just before the 20-mile aid station I committed the unforgivable sin of trail running, which is that I got bored and lost focus. I tripped on something at the top of a steep downhill, landed on my left shoulder, and cracked that clavicle (for the second time, same bone—the first time having been 45 years prior, in 3d grade.) My friend had to complete the event on his own, while I had to take a DNF (my only, to date.) I was determined to heal inside two months, in time to join a group of friends to celebrate the 100th marathon of a dear couple of friends. Somehow, I was able to do that without much running in the interim (the 2011 White River Marathon for Kenya.)

Why is the D.C. area a great place to be a runner: As one of our area‘s legendary runners, Michael Wardian, has shown, you can run loops around D.C.! You‘re never far from great trail or road running. Even when you can‘t get out into open country for a good trail running, you can have very good solitary running in nature (in Rock Creek Park and the C&O Towpath, for example), even in the middle of millions of people.