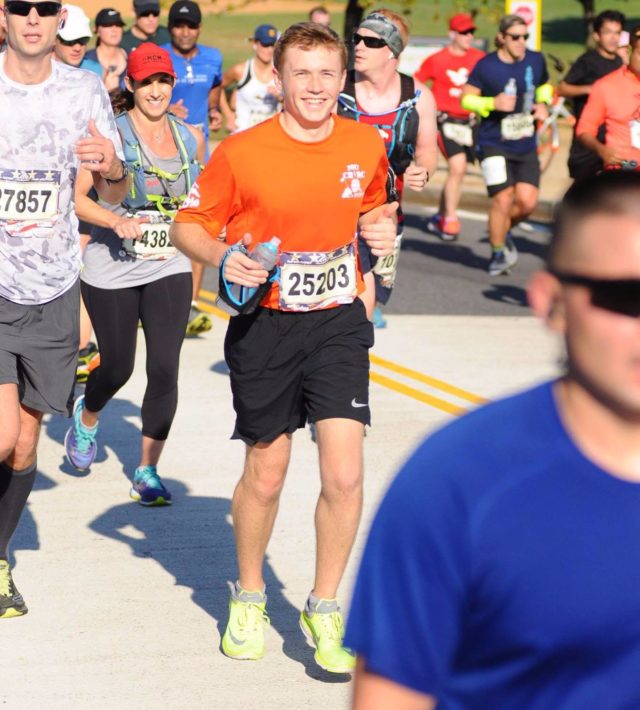 Why you run: There is no better way to learn about your city than hitting the streets. When I first moved to D.C., knowing no one, I decided it was time to pick a hobby that got me out of my neighborhood and into the city. Since then, I joined a running club and my motivation became running my first marathon. Like many others, that first marathon was all it took. I signed up for my second the next year. This year, I am taking my running home to Nebraska for the Sept. 15 Omaha Marathon, which is also going to be my final long training run for the MCM50K.

When did you get started running: As a high school student I was never fast enough to compete in track, and our small town had no XC team. That said, I still enjoyed the alone time I had when I would go for a run around town. Now I do it for the camaraderie and friendships I have made over the years of running in D.C.

Have you taken a break from running: In college.

My favorite place to run in the D.C. area is: A tossup between the Mount Vernon Trail and the Metropolitan Branch Trail.

My best race was: My first Marine Corps Marathon. Not because of my finishing time, but because I finished what I never expected to do.

Favorite local race: I have never run a race in D.C. I didn’t love. Whether it is the Marine Corps Marathon, Credit Union Cherry Blossom Ten Miler, or Rock ‘n’ Roll D.C., I have always enjoyed the run.

Ideal post-run meal: I always leave a race and head straight to brunch, preferably with chicken and waffles and mimosas on the menu.

Favorite flavor of gel, gu, etc: I carry a few packets of Welch’s mixed fruit flavored fruit snacks during my long runs and races. It’s not scientific, but it tastes great at mile 20.

Your advice for a new runner: Never underestimate the power of good shoes. We have some amazing running stores in the DMV.

Song in your head during a run: Running on Empty by Jackson Browne

Have you dealt with a major injury: Luckily no…(knock on wood)

Why is the D.C. area a great place to be a runner: No matter what part of the city you’re in, there is always a runner going by. The running community makes the long slog through summer training worth it. Also, you can’t beat the beautiful scenery and amazing trails that we are spoiled with throughout the entire region.