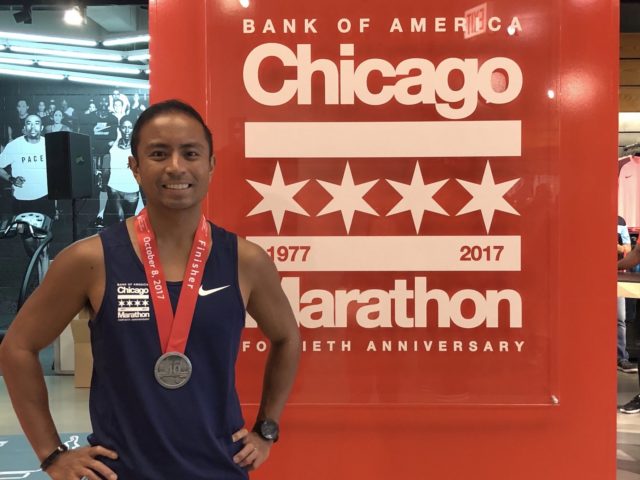 Name: Francis Yu
Self-described age group: 30-34
Residence: Northeast DC
Occupation: Government attorney
Why you run: Besides improving my overall health and fitness, I enjoy the feeling that I set and achieved certain goals. There’s also something about exploring a city or town on a run that makes you feel like you’re making the place your own. Whenever I travel, whether running through popular spots or isolated, obscure places, a good sightseeing run makes me feel like I took a piece of that place with me.
When did you get started running: Relatively late, in my mid-20s. One day I decided to see how far I could go, and I surprised myself when I made it from Rosslyn and across the Memorial Bridge to the Georgetown waterfront without stopping. I did that loop two or three times a week for several years until I decided to train for my first half marathon in 2013.
Have you taken a break from running: I usually take a week or two off after a goal marathon, but I haven’t taken any extended breaks.
Training shoe: I tend to experiment with whatever’s on sale, but I love the New Balance Zante and try to always have a pair in my rotation.
Coach or training group: When I lived in Arlington I did my track workouts with the Northern Virginia Running Club. It’s a bit hard to make it out across the river now that I live in the District, but I still wear the team jersey on race day. Other than that, I run on my own.
The hardest race you’ve ever run: I’ve had a few races where I bonked early and had to slog through it, but the 2016 Marine Corps Marathon sticks out in my mind as one time when I really questioned everything and considered quitting the sport. It was a hot and humid day, and I slowed to a run/walk after Hains Point. Of course, that attitude didn’t last long, and I decided to push even harder for the next training cycle.
Most adventurous decision you’ve made with your running: Maybe joining a running club and then wearing the team singlet for the first time. I also felt quite adventurous the first time I completed the Arlington Loop (in 2014) and when I signed up for my first international marathon (Berlin 2015).
Running mentors: All of the NOVA teammates and DC runners I follow on social media who are train hard every day and still look like they’re having a good time.
My favorite place to run in the D.C. area is: The Mall at night is still a special place after all these years.
Favorite local trail: Having lived in Arlington for about ten years before moving into the District, the Mount Vernon Trail always feels like home.
My best race was: The 2018 Rock ‘n’ Roll DC Marathon. On a hilly course with a desolate second half, somehow I had a breakthrough and PR’d by 10 minutes. That was when it occurred to me that a BQ was inevitable rather than some unattainable, unthinkable goal.
Favorite local race: The Crystal City Twilighter 5k. Though the weather is usually horrendous, the atmosphere and nighttime vibes bring me back every year. Also, the 2010 race was my first official race ever. A close second is the Rock ‘n’ Roll DC Half – I always enjoy the neighborhood miles after Woodley Park and the long descent down North Capitol, where no other race goes.
Ideal post-run meal: My go-to meal after a long run is sausage, rice and eggs. After a race, though, definitely pizza with all the sausage and pepperoni.
Favorite flavor of gel, gu, etc: Either the tri-berry or jet blackberry GUs. I also enjoy the chewy jellybeans.
Pet peeve: Water fountains that don’t work. Abandoned scooters on the trail.
Goals: (1) Qualify for and run Boston; (2) run a sub-3 marathon. Thankfully, I’m just about to enter the 35+ age group, so goal #1 should get a bit easier.
Your advice for a new runner: Go at your own pace; you’re only competing with yourself. It’ll get easier, and speed and distance will come with time.
Favorite running book: I rarely pick up and finish a book these days, and I don’t think I’ve ever read a running-themed book (though I should). But I did enjoy the Da Vinci Code, and they did a lot of running in that one.
Song in your head during a run: It depends on whatever earworm I pick up that day, but I usually listen to podcasts – like Pace the Nation! Though I was tweet of the week in episode 9 or something, I’m one of those passive listeners that they abhor.
Have you dealt with a major injury: Fortunately not. I did have recurring knee pain for which I relied on a knee strap for several years. But eventually I committed myself to several months of consistent leg strengthening workouts; then all of a sudden I decided to try running without it and discovered that I didn’t need it anymore.
Running quote: “Keep showing up.” – Des Linden.
Why is the D.C. area a great place to be a runner: We’re lucky to have such easy access to a diverse trail network without having to travel very far. I don’t take for granted that I can step out my front door and be on trail within a mile or two. We also have a great, supportive community, and it’s nice to see familiar faces at every race.

The National Park Service plans to reopen Beach Drive to cars for nine months of the year, but is accepting comments through Thursday.

More Stories
Pull the plug? How do you make a decision on a marathon a month outClouds bring good fortune to luckly DCXC Invitational racers