Some people spend years training to qualify for the Olympic Marathon Trials, but George Washington alumna Megan Hogan did it twice before she ever got to run a marathon.

But eight years after she left D.C. to embark on a brief professional running career, Hogan finally ran a marathon, finishing Boston in 2:42:00 to qualify for the Trials for the third time. It followed a “pretty conservative” training cycle, and she is now eager to begin training for the trials and devote more of her focus to marathon training, in hopes of making it to the race without injury for the first time. She made the 2012 Trials with a 10k time qualifier and the 2016 Trials with a half marathon time.

The Ballston Spa, N.Y. native still maintains a relaxed approach to her running and nutrition, openly admitting that she sometimes misses training runs because of work deadlines she faces as an interior designer and regularly indulges in a glass of wine.

“When you’re working a full-time job, you’re going to miss a run because you are traveling for work and don’t have time to fit in a run that day or you have a deadline found out about noon and have to skip run in the evening,” she said. “You have to accept that not everything is going to work out just exactly how you want it to.”

Hogan, 31, initially got involved in athletics as a Division III basketball player at Mount Ida College outside of Boston. The athletic department noticed her speed on the court and when the school formed a cross country team during her sophomore year and asked her to participate, she said yes. She improved rapidly and was named the 2007 Greater Northwest Athletic Conference runner of the year.

“I didn’t like running much. It mostly for punishment [in basketball,] but they needed people so I said, ‘OK, whatever,'” she said. “I ended up winning majority of the races that season.”

Hogan was eager to transfer to George Washington University. When she called the cross country coach and asked if he would take her on the team with the times she had been running, he said yes. That launched a stellar college career in which she won the two Atlantic 10 Championship 5ks in 2009 and 2010 and a cross country title in 2010, which she followed by qualifying for the NCAA Division I Championships, where she finished eighth.

After college, Hogan briefly ran professionally with Team USA in Minnesota, but quickly got injured and was diagnosed with celiac disease, an immune disorder in which eating gluten can damage the small intestine.

“My body just couldn’t handle it,” she said. “I just kind of felt like I was spending my time being injured out there.”

Hogan moved to New York City to pursue interior design, which she studied in school. It was the first of several breaks the elite athlete would take from running — including for a busy period at work studying for her professional licensure exams and a serious bike accident last year in which she fractured her lower jaw in four places — though she always found her way back to the sport.

The Trials will give her a chance to regain her confidence after taking a break from competition in 2018. Tracksmith Hare Athletic Club coach Louis Serafini said high-level competition has been missing from her running, despite her finish at Boston. Early on when she moved to Boston, she met Serafini, who drew her back into competitive running.

In late 2018, after recovering from her jaw injury, she got the itch to finally run a marathon and managed to get into Boston.

“The biggest thing [for Boston] was not getting in shape and racing, it was just … putting herself out there,” Serafini said. “She knew how good she used to be and had a lot of self-doubt that she could still run those times and still be a great runner.”

While Hogan won’t be a contender to make the Olympic team, Serafini, who has also qualified for the Olympic marathon trials, said she’s likely capable of running under 2:40 and that “for her to just go out and compete, find a good pack and move up in the second half and just really act like she belongs would be a good day.”

Serafini called Hogan the most talented person he’s ever coached, but acknowledged that her demanding work schedule is likely to be her biggest obstacle to overcome.

“It’s going to be all about consistency. She works a really demanding job and really has to get out there early in the morning,” he said. “The thing that makes me nervous is when she has deadlines for work, she misses a workout. Things get in the way.”

While Hogan loves running along the Charles River and is excited to explore some of the trails around her new home in Sommerville, Mass., she said she expects Boston’s frigid winter to frequently force her inside. “I’m not shy,” she said. “I’d rather be on the treadmill than on the ice.”

Still, her new home’s running paths don’t match up to the scenery in the nation’s capital.

“I miss D.C. so much. It’s my favorite place to run,” she said. “I totally miss just doing a casual sunset run on the National Mall… I love running in that city.” 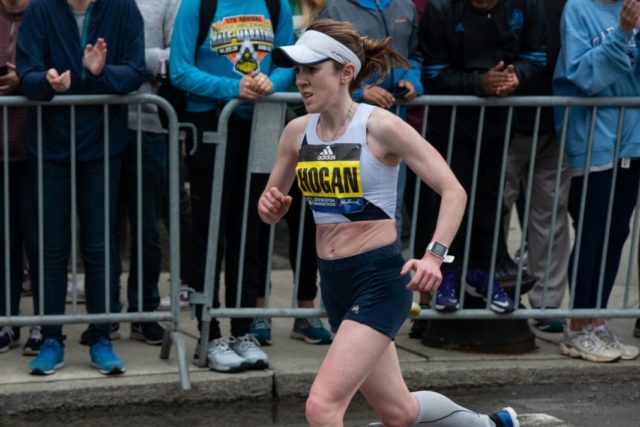