If it wasn’t for the eastern screech owl with one bad eye, I might still be unaware of the Patuxent Wildlife Research Refuge’s North Tract and its many miles of undulating dirt roads, a mere 25 minutes south of my home in Baltimore. An unseasonably hot and humid day in October 2017 resulted in a shortened run at Greenbelt Park. My wife and I had driven south on the Baltimore-Washington Parkway intent on logging 90-minute runs on Greenbelt’s principal loop and adjacent athletic fields, but the conditions exacerbated our training fatigue. We decided to cut our losses make the most of the afternoon by exploring the area.

Pets must be kept on leashes

“Let’s stop at the National Wildlife Visitor Center. I’ve heard its museum is excellent,” I suggested. Upon entering the visitor center, I immediately noticed the diminutive owl perched passively on its handler’s forearm. A fine ambassador for her species and the Fish and Wildlife Service, the owl facilitated visitor engagement, enticing us to approach the volunteer on whom she sat. During the long conversation that followed, we learned that the owl had incurred an injury early in life or had been born with a defective left eye. Had she not come into the refuge’s care, she likely wouldn’t have survived in the wild.

The perceptive volunteer noticed that we were clad in running gear and inquired if we’d ever run on the refuge’s trails. I explained that I was aware of the three or four miles of paths surrounding the visitor center but had never explored them. She then referenced the refuge’s North Tract and its twenty miles of trails. Twenty miles of trails? How was I unaware of this site? A competitive trail runner, I’ve visited most of the region’s public lands and consider myself an expert of Maryland’s parks and trails. With my interest piqued, I researched the North Tract as soon as I got home and downloaded a map of the park.

The following weekend — and many weekends thereafter — I ran at the North Tract. I arrived expecting only single-track trails and the Wildlife Loop, a paved park road, but, to my surprise, the park contained several miles of dirt and gravel roads of varying technicality. Since this first visit, I’ve explored the park extensively and run on most of its roads and a few of its short single-track trails. For years, I had looked enviously at Strava and Instagram photos of smooth fire roads throughout the West, remaining ignorant of this underutilized natural asset just down the road.

The North Tract quickly became my favorite regional training spot, and I’ve gone there to complete critical long runs and workouts in preparation for both road marathons and trail ultras. Its roads vary in surface. Some sections are firmly and evenly packed dirt and clay, while others present minimal or moderate technicality, where erosion has cut crevices and exposed rocks. There are no extremes here. You won’t encounter towering pines, epic climbs, or grand vistas, but the roads roll relentlessly through a patchwork of landscapes–hardwood forest, meadow, riparian, and wetland — representative of the Piedmont Region of central Maryland. In this wooded oasis surrounded by suburban development, you’ll share the trail with a diversity of wildlife, including migratory birds and species on Audubon’s “watch list,” an ignominious distinction for their declining populations. Visit often enough and you will eventually find yourself in a footrace with one of the many wild turkeys that roam Sweetgum Lane along the meadow.

Enter the park on Bald Eagle Drive, which leads to a parking lot adjacent to the Ranger Station. Entry is free, but you must check in at the station to obtain a permit. I recommend that you begin your exploration in the west side of the park. Exit the parking lot and make right onto the paved Wildlife Loop. After approximately 100 meters, you’ll enter the forest on Wild Turkey Way, a dirt road that continues westward for 3.7 miles to Blue Heron Pond. The road gradually climbs for over mile. Before the second mile, veer right onto Sweetgum Lane and, shortly after, make another right onto Whip-poor-will Way, a U-shaped fire road that will eventually reconnect to Sweetgum Lane. This section of the park is my favorite. The road, overgrown at times and featuring moderately technical footing and a few fallen trees, leads through a dense forest past a historic cemetery before emerging into a vast meadow.

At the end of Whip-poor-will Way, turn right onto Sweetgum Lane and continue until you reach a three-way intersection. For a shorter run, you can take a hard left on Wild Turkey Way. If you wish to log at least 7 miles, I recommend taking the soft left onto South Road to experience the park’s best climbing. You can close your loop by making a left on either Kingfisher Road or, for a short extension, the paved Wildlife Loop, both of which lead back to the parking lot.

Before visiting, I recommend calling the Ranger Station to confirm if any trails are closed. Throughout the fall and winter, large sections of the site are only accessible to hunters, except on Sundays. I’ve run in the park in all weather conditions, but I caution against visiting during or after heavy rain. Many of the dirt roads drain poorly, leaving ankle-deep pools of water. In the summer, the canopy provides relief from the sun, but be prepared to battle legions of biting insects. I’ve been swarmed with so great a number that I looked like a cartoon character being pursued by a cloud of bees. I learned that their maximum speed is approximately 8.7 mph. Run slower at your peril, or wear proper gear. Lastly, be mindful of signage for restricted areas. There are many enticing trails that are closed to the public, likely because of the areas are environmentally sensitive.

In addition to its recreational spaces, the Refuge provides many public programs to advance its educational and conservation mission. In recent years, however, the Refuge’s budget has diminished. Go there soon and bring friends. Your visit is quite literally a vote with your feet for our public lands and their stewards. 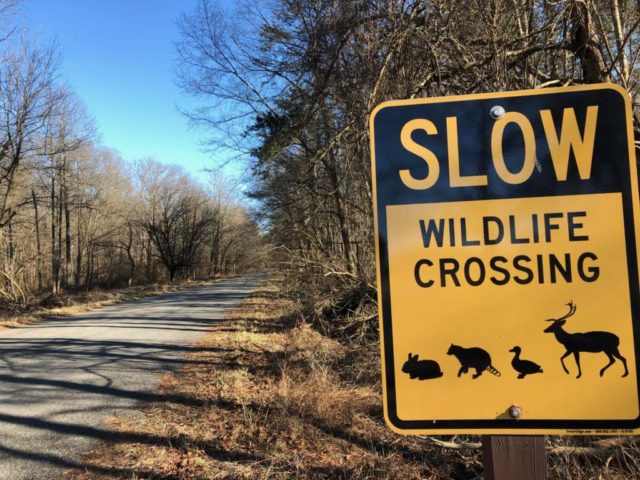