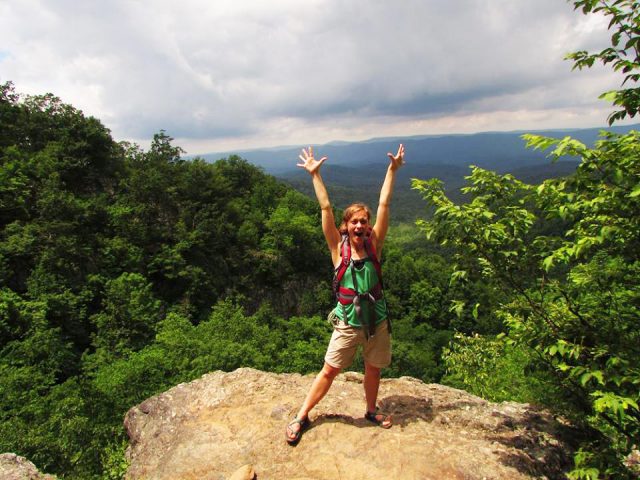 Why you run: I’m an anxious person by nature, and running helps calm my brain. Plus, I love this city, and running connects me to it.

When did you get started running: While my first love is bicycling and has been for about 10 years, I got rear-ended by an old guy in a Buick on a ride in 2014. While physically, I was fine, my mental state after the crash was another story. I couldn’t ride in traffic without suffering some level of breakdown, so I gave running a shot.

Have you taken a break from running: Not…really? That would suggest I’m serious enough to be on a regular training schedule. I’m not.

Training shoe: Saucony Omni 15s. And, recently, a sweet pair of Mizuno Waves (Lamborghini edition!) that I got from a friend.

Coach or training group: None.

The hardest race you’ve ever run: I did an Olympic distance triathlon in Richmond that was pretty rough — only because I overdid it during the bike portion (and got the 4th fastest overall female split time!) and was left loping along through the 10K. But I made it through.

Most adventurous decision you’ve made with your running: Deciding to run a trail Ragnar in Tahoe this July–if I can get the time off of work, which remains to be seen.

Running mentors: They’re both named Kate!  Katie, who writes for this magazine, is an incredible cheerleader. She celebrates even my smallest victories, like the first time I got through a 5k without walking. Kate, who is one of my oldest friends and former long-time roommate, tried to get me into running after college, but it never stuck. By the time I got around to it, she had moved away from D.C.. We ran our first race (the Richmond Half Marathon) together last year, which meant a lot to me. I should also mention my friend Garrett, who ran it with us and destroyed us both — when we run together, he’s amazingly positive and stays that way, even when I’m busy being miserable.

My favorite place to run in the D.C. area is:  The Metropolitan Branch Trail. I live on it and ride/run on it every day. I usually see friends out there, and it’s patrolled by the WABA Trail Rangers, who stage clean-ups and regularly hand out coffee and muffins. It’s an unusual but wonderful community.

My best race was: I ran a small 10k on Hains Point last year that I totally crushed. I improved my best 10K time by something like 10 minutes.

Favorite local race: Not sure. I don’t do many races because, well, they’re expensive. But I did the Cherry Blossom 10-Miler a couple of years ago and loved it.

Pet peeve: I have two. One, drivers who are on their phone and/or don’t look when they turn and/or don’t yield the right of way. Two, cyclists who feel like they own the trail.

Goals: To run a marathon. Eventually. I’ve run two half marathons, and while I claim out loud that I could never run 26.2 miles, I secretly want to. I’d also love to pick up trail running, but it’s pretty tough in this area when you don’t have a car.

Your advice for a new runner:  Don’t look up advice on the internet. You’ll overwhelm yourself. Find a buddy, maybe one who knows a little more about running than you do.

Favorite running book: Hm….I picked up Running on Empty by Marshall Ulrich, who’s an ultrarunner who runs across the country. It’s insane. I love to read about people who can do crazy things like that. The human body is an amazing machine.

Song in your head during a run: Chelsea Dagger by the Fratellis. That was today. For awhile, I was naming all of my Strava entries after whatever song was stuck in my head for that particular activity.

Have you dealt with a major injury: *knocks on wood* No…just really stubborn hamstrings that always seem to get cramps.

Running quote: I don’t have one, but I do like that one about life being like a bicycle–in order to keep your balance, you have to keep moving forward. It’s so true.

Why is the D.C. area a great place to be a runner: Three seasons out of the year, the weather is glorious (summer does not count). But most importantly, it’s a small city! On a 6-mile run, you can go from train tracks and industry to fancy embassies and giant mansions. And if you’ve lived here for long enough, you’re guaranteed to see at least one person you know.