It’s a testament to his commitment to the community. A retired Gaithersburg High School guidance counselor and one of the school’s track and cross country coaches, Tolbert has been a pillar in the Montgomery County running scene for over 40 years. Still proud and enjoying what he does, Tolbert is nearing the point where he’s coaching his kids’ kids’ kids.

“It’s kind of like six degrees of Coach Tolbert,” he said with a smile.

Tolbert, 70, has spent his entire teaching and coaching career at Gaithersburg, and simply put, it’s the kids and close-knit community that have kept him there.

Running has had a huge impact on his life, and he still runs everyday — although slower than in his youth. His three dogs — Joanie, Jesse and Billy — are all named after runners. (His chocolate lab Pre passed away a few years ago.)

Tolbert grew up in a housing project in Buffalo, watching many neighborhood athletes go on to college and professional sports. Starting young, he tried to emulate the older kids and became involved in sports. He played basketball and ran collegiately in Buffalo, and after graduating in 1972, moved to Gaithersburg to start counseling at the high school.

His coaching career began in 1973, just after Title IX prohibited sex discrimination in education and paved the way for women’s sports in schools nationwide. That included Montgomery County, and Tolbert was asked to coach Gaithersburg’s women.

Not all county schools had a team, he said, and if they did, many didn’t have more than a handful of runners.  There were about five or six girls’ teams in Montgomery County. Now, the county boasts 25 coed teams, one at every high school.

That year, he also took the helm of the women’s basketball team, which drew some runners who used the hardwood for winter conditioning. The following spring, a women’s outdoor track program was added and Tolbert volunteered to coach.

“The men had to get used to the idea that the women were going to use the facilities,” Tolbert said. “We had no uniforms. We had no schedule. Going to some schools, they only had 10 kids on a team. Those first years were tough.”

The track and cross country teams became blended in the late 1970s.

Throughout his tenure, Tolbert worked hard to ensure that his kids understood that running is both a team and individual sport.

“With cross country especially, you can have the best runners in the state on your team, and your team could be average at best. It doesn’t matter what the first person does. It matters what the fourth, fifth, sixth and seventh runners are doing.

“I keep the kids that are our fourth or fifth [finishers] engaged because they are important,” he said. “They are very important.”

Outcomes are not based on the team’s stars, Tolbert said. They’re based on everyone together.

“It’s what I like about cross country. It is one of the truly great team sports,” Tolbert said.

“He didn’t think of it as an A team and a B team,” said former Tolbert runner Danniel Belay, a junior at Rider University. “Regardless of talent, he gave every single person an opportunity to shine.”

Although humble, Tolbert prides himself on his coaching style. He’s firm, but not overly aggressive. He’s friendly but still demands a lot out of his runners. He never gets angry and he never yells. After working under and with aggressive coaches, Tolbert understood it was ineffective and opted to reach out and connect with the young runners — especially the women.

Tolbert developed a good cop/bad cop strategy with fellow coach Fran Parry during the ’80s and ’90s. It was during this time that the cross country team rose to dominance.

“He was my alter ego. He was the crazy one,” Tolbert said. “There were times when he’d come up to me and say, ‘I’m going to go give that kid heck. Be ready to go talk to him.’ And I would. This went on for years.”

Tolbert would be the voice of reason and steer the student back into practice when everyone had cooled down. The two of them, along with other coaches, were inducted in the inaugural class of the Athletic Hall of the Fame at the high school in 2015.

But, Tolbert expects a lot out from his kids, said Erin Gorely Gentzel, 41. 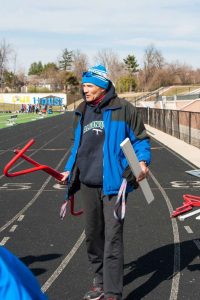 “He gives you a summer plan,” Gentzel said. “He gives you very detailed and often personalized workouts. He gives you times specifically to your ability to hit. He expects you to give 100 percent at every practice. He expects a lot of you not as a runner but as a teammate.”

Gentzel, who ran for him in 1989-93, describes him as the voice inside her head that wouldn’t let her quit. She kept going because she didn’t want to let him down.

There was one time, however, where she distinctly remembers being thrown out of practice because she wasn’t working hard enough. That bruised ego took a long time to heal.

To this day, Gentzel still values Tolbert’s opinions and asks for his guidance when she needs it — running or not.

“He becomes a part of the family,” is a sentiment that many of his former runners share. Gentzel has invited him over for family dinners. Belay saw him turn a running team into a family, and created a close-knit running community in Montgomery County.

“He’s brought that family atmosphere to every school in our county,” said Belay, who ran for Tolbert starting in 2011. “He had that relationship that he not only connected to you on a coach-and-athlete level, but it was also like he was part of your family. Once he started doing that, he brought me closer to the sport.”

When and if Tolbert does retire, Aaron Anderson hopes to be the next Coach Tolbert. As a current assistant coach alongside Tolbert, Anderson tries to be an encouraging and positive coach, not a domineering force.

Anderson, 33, has been coaching with Tolbert for about seven years. After high school and college, he had no desire to return to Gaithersburg, but Tolbert convinced him to stick around and join the coaching staff.

“He’s my mentor. He’s my role model. Asking to help him coach was like my dream job,” Anderson said.

Anderson ran for Tolbert after he moved to Gaithersburg during his sophomore year of high school in 1998. Tolbert convinced him to run for him, rather than joining the school’s football team.

“He’s such a great guy; it’s kind of hard to say no to him,” Anderson said.

But when that retirement will happen is up in the air. Tolbert absolutely loves what he does. His wife, however, is ready for him to take a step back.

His views on coaching retirement go hand in hand with running. He wants to continue doing both as long as possible. Heart bypass surgery in the early 2000s didn’t stop him, so why should age? Although he’s running a little slower and not as far, he wants to remain a source of inspiration.

“I’m still running,” he said. “I hope I inspire those kids to get out and to run. I hope I can run forever.”