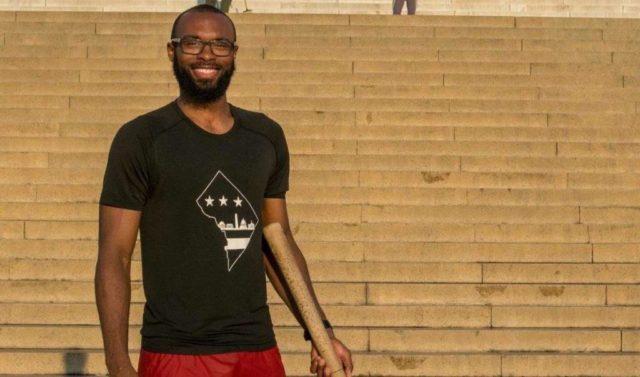 Volunteer roles in the running world: Feeding the homeless at the Convention Center for Thanksgiving & various cheer stations

When did you get started running: I ran track briefly in high school, recreationally in college and just recently put it in overdrive these last two years.

Have you taken a break from running: I did when I was helping someone with a long run of 17 miles 6 days after Marine Corps Marathon. Shortly after 9 miles I couldn’t run let alone walk straight. So a lot of lonely miles on the way back into Georgetown from the Capital Crescent with no hat, no headphone, no bike share or any quicker means of getting into town. I came down with runners knee really bad and took about a week and a half off. Been foam rolling ever since and haven’t had any issues.

Training shoe: Hoka One One Bondi 5 and 6z

The hardest race you’ve ever run: The Northface Endurance Challenge 50k April 28, 2018 My first ultra marathon which was six months after my first marathon MCM 2017. This race was hard simply because of the terrain, I’ve never trained in mud and didn’t think it would be that hard. 25 miles later I was mentally over it and just wanted to reach the finish line.

Most adventurous decision you’ve made with your running: Signing up for the 50k after increasing my mileage weeks prior and thinking this’ll be a breeze. Unfortunately that was not the realization after a few miles in on race day.

My favorite place to run in the D.C. area is: The National Mall, there’s some many beautiful sights.

Favorite local trail: Rock Creek Park, I do not know my way around there. Just know when it’s time to turn around lol

Favorite flavor of gel, gu, etc: Just started trying Spring Energy. I typically do without gel or gu up until 15 mile for my training runs or even half marathons.

Pet peeve: People not keeping to the right during a race.

Your advice for a new runner: YouTube and listen to other runners but do what feels best for you.

Song in your head during a run: Big Sean – Go Legend

Have you dealt with a major injury: Nope

Running quote: Life quote: You have winners and those that are not them.

Why is the D.C. area a great place to be a runner: There’s so much motivation around with other runners, the scenery, the trails, the run clubs… everything is here.