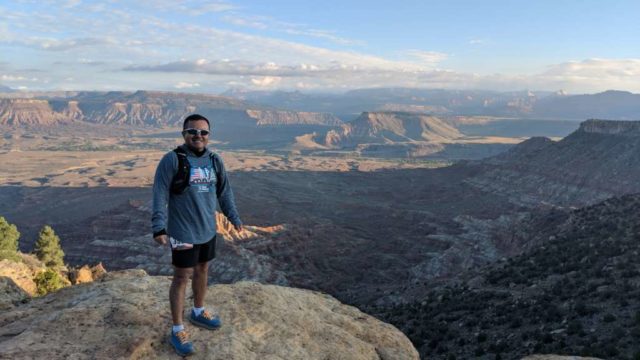 Volunteer roles in the running world: Every year I volunteer as a driver for elite runners competing in the Cherry Blossom 10-Miler.  I am also a race director for a few DC Road Runners races, including the DCRR Cross Country 3+Miler, DCRR Bluemont 5k, and the National Capital 20-Miler and 5-Miler.

When did you get started running:  I started running at age 32.  In the past, I used to associate running with going around in circles around the high school track (no workout plan like PE in high school).  This changed after I ran my first race, the DCRR Capital Hospice 12k, in February 2009.  This was the moment when I decided I was going to start running and competing in races.

Have you taken a break from running:  I’ve taken a few breaks but no more than 2-3 weeks due to injury or illness.

Training shoe:  Hoka Bondi 6.  I was crushed after Hoka discontinued their Constant 2s.

Coach or training group:  My main training group for the last 10 years has been D.C. Road Runners’ Saturday Long Run (I get grumpy if I don’t get to do my long run on Saturday mornings).  This is my go to group throughout the year, especially when I’m training for a marathon or ultra.  I also train with Fairfax Pacers, Trottin’ Oxen run club, Lifetime Fitness Run Club (Fairfax) and Caboose’s Trails and Ales.

The hardest race you’ve ever run:  The Back on my Feet 24-hour Urban Ultra in 2014, running 102.52 miles on paved trails took everything I had.  This was more like an eating competition for the first 75 miles.  The last 25 miles was just a mental challenge, trying to survive the summer heat in Philadelphia and the little voice in my head telling me to stop.  Had it not been for Carl Ford, my pacer and great friend, I don’t think I would have made it that far.  Despite receiving the smallest race medal so far, this has been my greatest race.

Most adventurous decision you’ve made with your running:  Running Grand Circle Trail Fest in Utah twice.  This is a 3-day running camp with 10/13-mile trail races in Bryce, Zion and the Grand Canyon.   After last year Trail Fest, I decided to add hikes in Arches National Park, Antelope Canyon, and Monument Valley.  Super freaking awesome!

My favorite place to run in the D.C. area is:  Running around the National Mall and Rock Creek Park.

Favorite local trail:  Either Burke Lake or Manassas Battlefield Park (my favorite place to get lost).

My best race was:  The 2009 Suntrust National Marathon, my first and best marathon time (3:19:39).  After over 25 marathons, I have not been able to run a faster marathon.

Ideal post-run meal:  Smoked BBQ or Mexican, served with a cold Belgium beer in the summer or stout in the winter (Hardywood).

Pet peeve:  Runners who stop at water stops to stretch and block other runners behind them.

Goals:  The one goal I have is to beat my PR marathon in the next few years.  However, I would trade that goal any day with just being injury-free and healthy.

Your advice for a new runner:   Never give up!  Enjoy running and never make it something you are forced to do.   Also, don’t compare yourself to others.  There is only one of you and just being out there makes you super awesome.

Song in your head during a run:  Million Miles Away by Offspring.

Have you dealt with a major injury:  I had a stress fracture (tibia bone) 10 weeks before competing in a half ironman triathlon (Eagleman).  I knew I could swim and bike without a problem, but I was worried about my running.  I didn’t run until race day and I felt my leg was healed.  However, after running 5 miles I started having leg pain, so I walked most of the way to the finish.  I don’t know how I did not do any more damage to my leg.  After each step I took, I kindly asked my leg not to break.  The crazy things runners do.

Running quote:  “Winning has nothing to do with racing. Most days don’t have races anyway. Winning is about struggle and effort and optimism, and never, ever, ever giving up.” – Amby Burfoot

Why is the D.C. area a great place to be a runner:  There are so many trails in the area and runners in the DMV that it’s hard not to find a running partner or group.  We also have some of the premier running events, including the Marine Corps Marathon, the Alexandria Turkey Trot and the Parkway Classic.