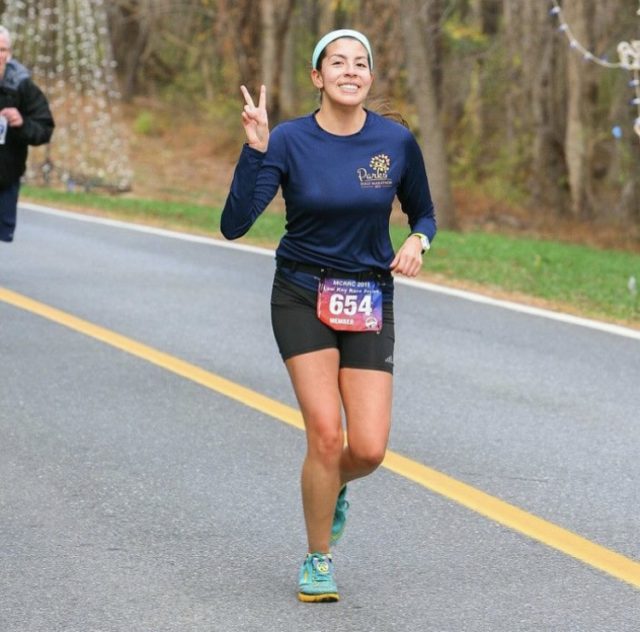 Volunteer roles in the running world: Girls on the Run coach at my school!

Why you run: I run because it makes me feel powerful and makes me push myself. I’ve never been the most competitive person, but I do love setting new goals for myself. Even on days when I feel lazy, I finish my runs feeling happier, healthier, and fulfilled for the day.

When did you get started running: I started my freshman year of high school when I joined the cross country team. I had always enjoyed running the mile in middle school and felt like running was the only sport I felt comfortable doing. Spoiler alert, I threw up after my first practice. But it was one of the best decisions I’ve ever made. This is when my love of distance running began (back when I considered 5k distance!). That team holds a special place in my heart.

Have you taken a break from running: I’ve taken lots of breaks! I pretty much took a break during all four years of undergrad. I only went on the super-occasional three-mile run. After graduation, I decided to get back into it and signed up for my first half marathon. Since then, I’ve taken several long breaks between seasons. I was on a break practically all last year, but I’m getting back into it again.

Coach or training group: I’ve been a solo runner up until now (besides high school), but I’m thinking of joining some local running groups.

The hardest race you’ve ever run: My first marathon- Rock ‘n’ Roll DC back in 2014. Minimal training. I knew marathons were hard, but I didn’t truly know. Rough times.

Most adventurous decision you’ve made with your running: I think I am currently making the decision. I’ve been super intimidated by my running dreams and aspirations, but I’ve finally decided to make a big goal and commit to some serious training. I’ve always been more of a laid back runner, so setting a serious plan is kind of nerve wracking!

Running mentors: My mother, who is the reason I decided to go for my first ever run. She reminds me to find the joy in it.

My favorite place to run in the D.C. area is:  The short trails along the Lincoln Memorial reflecting pool.There’s something about those tree-lined trails that bring me peace.

My best race was: B&A Trail Half Marathon in 2015. Everything clicked.

Favorite local race: Parks Half Marathon- been running it for years!

Pet peeve: People who walk/run shoulder to shoulder taking up the entire way and don’t move over, even when they know there are lots of other people coming and going.

Your advice for a new runner:  Don’t compare yourself to anyone. Be proud of your accomplishments and take it one step at a time. You’ll surprise yourself.

Song in your head during a run: Depends on what I’ve been listening to.

Have you dealt with a major injury: Thankfully no, I have been lucky.

Running quote: “Run the mile you’re in”. Not very exciting, but it has been a mantra in past marathons.

Why is the D.C. area a great place to be a runner: There are so many places to see and races to participate in. You’re surrounded by like minded people and will have no problem finding a running group. I love being able to pass by monuments and sights during a typical run! Keeps things exciting!