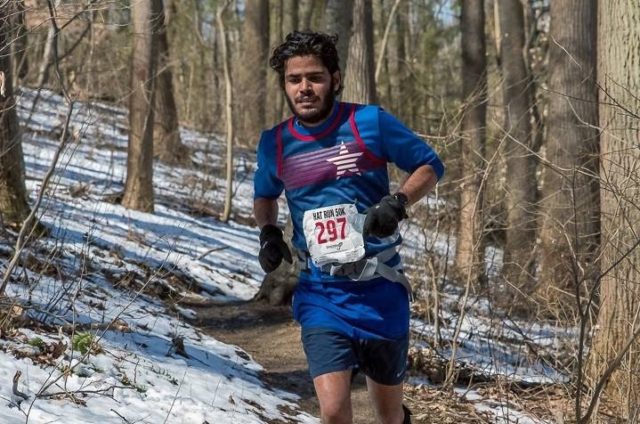 Lokesh Meena had just moved to D.C. to work as a diplomat for the Embassy of India when he started to notice the city’s active running scene.

At the time, running as a lifestyle choice was a foreign concept to him.

“Look at them,” he remembers thinking. “And look at me.”

Meena weighed nearly 200 pounds, and his doctor was lecturing him about his high blood pressure and cholesterol. Then 27 years old, the Rockville resident began to think more seriously about taking up running to lose weight.

Since then, 31-year-old Meena has dropped about 80 pounds and has racked up an impressive collection of running accolades. He holds a world record for Asian runners in the indoor men’s marathon, set last June at the Grant-Pierce Indoor Marathon in Arlington after he won the race in 3:13:19.

Married with three young daughters, he’s found the sport to be a source of comfort as his youngest daughter, Avni, battles leukemia.

“Running has helped me overcome all the challenges and at the same time focus on my job,” said Meena, adding he’s grateful for the support of his wife, Nirma, now also a runner.

While Meena has competed in dozens of road races, including the 2017 Boston Marathon, he says running the trails is his true passion.

Rich Mendelowitz, former D.C. Road Runners president, first met Meena when he joined the club in 2015. At the time, Meena was shy and timid, and just starting to find his way as a runner, Mendelowitz said.

Now, not only is he an accomplished athlete, he’s an enthusiastic volunteer at D.C. races and a tireless supporter of other local runners. His dedication to the sport earned him the club’s title of Most Improved Male Runner in 2016.

“He had been sedentary, and he saw that and made an amazing shift,” Mendelowitz said. “At the end of the day, he is just very talented. And he is driven to get better and succeed and improve.”

He continued to run more half marathons, including some in his native country, and finished the 2016 Rock ‘n’ Roll D.C. marathon in 3:25:17, followed by the Run for the Red Marathon in Pennsylvania in 3:11:22. He set his sights on qualifying for Boston and did so at the 2016 Erie Marathon, finishing in 3:02:01.

Fernando Cabada, owner of California-based Cabada Training Systems, coached Meena to his Boston qualifying time. Initially, he was skeptical when Meena reached out to him for help qualifying, knowing he needed to cut at least seven or eight minutes off his marathon PR — and he only had 10 weeks to do it.

“But the thing about him is, he loves to race,” Cabada said. “He was born for it. And really, I think when you are determined to do something, you are going to do it.”

After finishing Boston in 3:29:23, Meena was hungry for a new challenge, so he turned to trail running.

He got involved with the IAU and ran his first ultramarathon, the North Face Endurance Challenge 50K trail run in Virginia, just a few weeks after Boston.

“I treated that 50K like a road marathon,” Meena said, adding he quickly realized they are very different events. “But it was a good learning experience.”

Meena’s friend Raj Bhanot, a member of D.C. Road Runners and race director of the George Washington’s Birthday Marathon, said he admires Meena’s ability to balance his running with the demands of working and raising a family.

“I think running becomes meditation for him,” Bhanot said.

Meena said his future goals include continuing to run injury-free and run a strong 100K trail run. His goal is to finish a 100K race in under nine hours.

“Running is kind of like medicine for me,” Meena said.