Joshua Harmon started running while serving in Iraq. His wife, Kristin, wasn’t a runner, but she told him she’d run with him when he came home.

Kristin, who remarried in 2012 and now has the last name Johnson, has been able to run in Harmon’s honor through wear blue: run to remember, a nonprofit with communities across the country, including in Northern Virginia, Bethesda and Quantico. She lives in Alexandria.

“For me, it’s always been a way to be close to him and it’s been to keep a promise to him that I had made before he died,” said Johnson, who was 22 at the time of his death.

wear blue: run to remember works to make sure people like Harmon are not forgotten. The nonprofit honors fallen military members year-round, but Memorial Day, which is May 27 this year, is one special day for the organization. 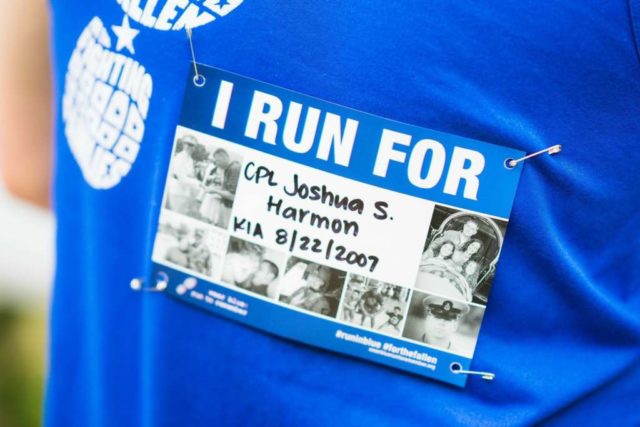 Melda Thornton, anchor community president for wear blue‘s Northern Virginia/Washington, D.C. community, based in Springfield, said wear blue hopes to have a runner signed up on behalf of the 6,947 service members killed in action since 9/11. Runners can sign up at www.wearblueruntoremember.org and choose to join a gathering, create a gathering or run on their own.

Thornton’s husband was in the Navy for 28 years, and she said she had to think about what she’d do if he were killed.

“I prepared (as much as you can), every time my husband left, for what my plan would be if he didn’t come back,” Thornton wrote in an email. “I also considered what I would do if it was a friend’s husband.  I never considered that we would be in the military long enough for it to be a friend’s son.”

Debbie told Thornton she wanted her to run for Brandon, letting her know about wear blue: run to remember, and Thornton started running for him in 2014, Thornton wrote. The Northern Virginia/Washington, D.C. community meets every Saturday for runs at South Run Park in Springfield, and each week, she recognizes Brandon during the Circle of Remembrance.

The first time she said Brandon’s name, it was tough, she said, getting emotional for a moment as she spoke on the phone. But Thornton said it gets easier to say his name.

“It’s such a powerful healing moment for people that come out,” Thornton said.

And the runs are open to everyone, with no registration and no fees. The exception is the Memorial Day event — people are asked to sign up so the fallen service members can be accounted for, but there’s still no cost. People are also welcome to walk and bring their dogs or families, Thornton said.

“Our goal is that we’re remembering together and we’re honoring together,” Thornton said.

The blue Mile features Faces of the Fallen posters, along with volunteers who hold an American flag and streamer with the person’s name for each of those fallen service members, Thornton said. The posters honoring the veterans are put out because someone who will be at that race wants to recognize each of those people.

“Each blue Mile is specific to that race,” Thornton said.

They often come at difficult points along a course, such as Hains Point on the Marine Corps course or the long hill from Rock Creek Parkway up Shoreham Drive during the Rock ‘n’ Roll DC Marathon and Half Marathon.

In 2017, Johnson ran the Marine Corps Marathon through wear blue‘s Gold Star Race Program. She said she made great friends, and she even takes trips with one of the other widows she met. The fellow Gold Star family members have a unique understanding of her experience, she said.

She’s also able to push herself by tackling challenging races as she honors Harmon, she said.

“My thought has always been to honor his life by living mine,” Johnson said.

Harmon served as a medic in the U.S. Army, and his obituary stated he earned the rank of corporal after his death. Harmon was able to save the life of a soldier who was shot in the head, Johnson said. Outside of his work, Johnson described Harmon as “hilarious” and talked about how he played guitar for her.

Thornton said running for Brandon is motivating. Whether she doesn’t feel like running or is wondering if she has time, there’s no excuse that will do, she said.

Thornton and Johnson both expressed how important it is for Gold Star family members that their fallen service members are not forgotten.

“For any Gold Star family member, that’s the most important thing, right, is to continue to make sure that your loved one’s name is said and that their story is continued to be shared so they still continue to live on in that way,” Johnson said.