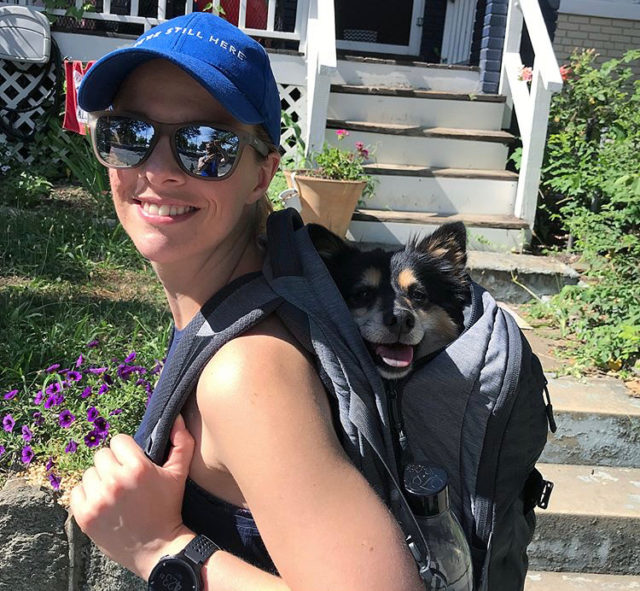 Why you run: Running is my alone time, when I can tune into the pattern of my footsteps and breathing and tune out everything else.

When did you get started running: I realized that I enjoyed running when I was working to make the varsity volleyball team in high school, but I didn’t start running for its own sake until after college. I was inspired by friends and former classmates running half and full marathons and thought I would give it a try. After my first half marathon in 2010, I was hooked.

Have you taken a break from running: I’ve experienced a fair number of injuries so, yes, I’ve taken a break but they haven’t been planned or happy times in my life.

Coach or training group: TW Training & Wellness. Tammy has been a game-changer. She’s improved my training and mental approach to running. I’m also part of the Oiselle Volée.

The hardest race you’ve ever run: The Richmond marathon in 2018. It was a brutal experience. The marathon gets a lot of attention, and rightfully so, but I also had developed a total complex about it. Several years in a row, I registered and trained for a full marathon but got injured before the race, and I blamed myself for falling short. I felt like I wasn’t a “real” runner if I didn’t get 26.2 miles under my belt. But after running a full in Richmond, I decided, actually, it just isn’t the distance for me. I prefer the half, and that doesn’t make me less of a runner.

Most adventurous decision you’ve made with your running: Going for it! Seriously, simply believing that running and racing was worth trying, even if I failed or fell short of my goals. And pushing through to “start all over again” after being injured. I’ve had a lot of self-worth tied up in running, which made those decisions adventurous.

Running mentors: The badass women of the Oiselle Volée and Haute Volée teams!

My favorite place to run in the D.C. area is: Under the trees that border the Lincoln Memorial Reflecting Pool. Even with lots of people around, it feels very calm with all the branches overhead.

Favorite local trail: I live in Southeast and can usually be found on the Anacostia Riverwalk Trail.

My best race was: I had a blast running the 2016 Richmond Half Marathon. The weather was great, I had so much fun, and I felt like I was tapping into my potential as a runner.

Favorite flavor of gel, gu, etc: I like the Gold flavor of Honey Stinger gels and strawberry Gu chews.

Pet peeve: I think it’s really important to practice good running and walking etiquette, which includes not taking up an entire sidewalk with your group. I’m looking at you, tourists!

Goals: I’d like to reach my potential in terms of pacing, which I realize defies every parameter of SMART goal-setting, but here we are. Maybe I have reached my potential, but I feel like I’ve got more in me. My next milestones are breaking 22 minutes in the 5k and 1:45 in the half marathon.

Your advice for a new runner: Use the treadmill if you have to, but take advantage of the amazing running trails in D.C., Maryland, and Northern Virginia. Also, don’t feel like you have to be the same kind of runner as the people you see in magazines or social media!

Favorite running book: Run Fast, Eat Slow and Run Fast, Cook Fast, Eat Slow by Elyse Kopecky and Shalane Flanagan. I appreciate that they address the pressure for women and girls in running to be thin, and shift the focus to nourishing your body with delicious food that helps you perform at — and feel — your best.

Song in your head during a run: Instead of listening to music during my runs, I repeat song lyrics in my head that help me hit a certain cadence. I frequently bounce between “Needy” by Ariana Grande and a 2004 throwback, “Let Me Love You” by Mario.

Have you dealt with a major injury: Several. I’ve had a stress fracture and tendinitis (one in each tibia), a stress reaction in a metatarsal, hip issues, weird calf tightness. Five days before the 2015 Army Ten-miler I got appendicitis — that one was definitely not my fault.

Running quote: A mantra I learned from Oiselle — “There is no secret. Keep going.”