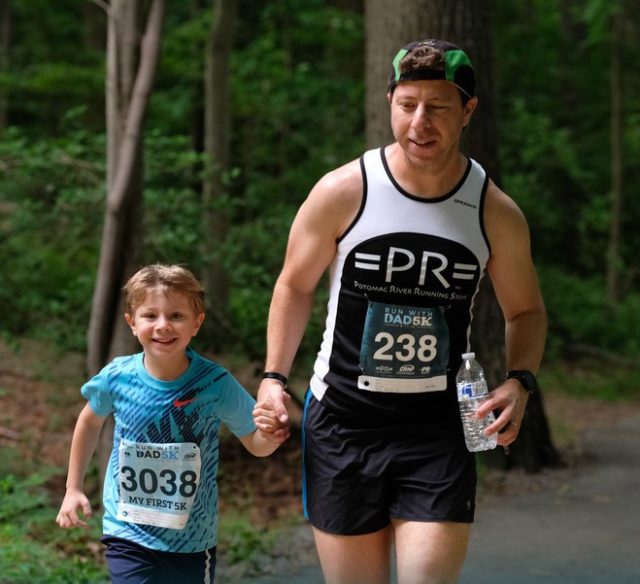 Why you run: This has changed over the years, but anything from: pushing myself toward big goals, stress relief, to solve the world’s problems, for health and to motivate others to be active (especially my kids).

When did you get started running: I started running competitively in high school as a sprinter running the 55m, 100m, 200m, 300m, and 400m.  My focus on running in high school led to me being a three-season runner (cross country, indoor track, and outdoor track), though I swore I would never run another 5k in my life after doing it for cross country because it seemed like forever.  In college I played rugby and had to put on some weight to play the sport (runners generally aren’t built for being durable in contact sports).  Post college, I turned back to running and discovered triathlon to explore a new sport and lose some of that weight.  It all started with a simple 5k race, but then more than 30 triathlons, a few century bike rides, 12 marathons, and thousands of miles later, I’m still out there…running far more than a 5k.  I got bit hard by the endurance bug.  Funny how that happens.

Have you taken a break from running:  My only extended break from running was my time in college before I rediscovered running again.  I’ve had a few injuries where I took limited time off, but never an actual break since returning to running after college.

Training shoe: I’ve been a loyal Saucony Kinvara wearer since the OG, but really have enjoyed the Nike Zoom Fly among a large range of shoes I typically rotate through.

Coach or training group: I’ve been a coach for the last 10+ years through Potomac River Running’s Distance Training Program in Reston.  Last year, I started coaching elementary school kids through the RunFit Kidz program at my son’s elementary school.  Both coaching groups have been so rewarding and provided continued opportunities to learn and grow as a runner and coach.  I also race on the Potomac River Running Race Team and enjoy occasional meetups with runners on the team when we can all get together.

The hardest race you’ve ever run: Probably Boston 2015.  Until the recent 2018 Boston Marathon, 2015 seemed like one of those rare days you’d rather be watching the race on TV in the comfort and warmth of your home versus being out there racing it.  It was 42F, with driving wind and rain – far from ideal, but its Boston and you just go with the flow.  The crowds were still there like they usually are and I truly enjoyed the experience.  However, I have 3 memories that stand out – grinding up Heartbreak Hill in a heavy downpour where the rain felt like little needles on my face; running the last 5+ miles after Heartbreak Hill with no feeling in my feet due to being cold and wet; and barely making it to the hotel only a few short blocks away to get my dry clothes because I couldn’t stop shivering and just wanted to sit down.  But hey, its Boston – if it were easy, I wouldn’t remember it like I do.

Most adventurous decision you’ve made with your running:  I missed requalifying at that 2015 Boston race by a little more than a minute, so on a whim I signed up for another marathon less than a month later.  Having never raced back to back marathons, I wasn’t sure how it would go, but I was fit and wanted to requalify.  I signed up for the Run for the Red Pocono Marathon, which featured approximately 12 miles with a large drop in elevation in the middle of the course that was supposed to translate to faster times.  Race morning was balmy starting in the mid-70s and 95% humidity, so I took it out very conservatively trying to keep my body from overheating too early and hopefully avoiding the crushing downhill pounding.  By the time I got to the start of the small but steep uphill sections around mile 18, my body had nothing left to give.  I could feel Boston still in my legs, the sun was out in full force with temps in the 80s and I was cooked.  I largely walked it in for those last 8 miles in damage control, but still finished the race with a smile.  Running is a privilege that we get to do and any time you have an opportunity to lace up, whether a run around the block or a race, it should be met with gratitude.

Running mentors: There are too many out there to name, but I learn a ton from professionals, age groupers, and kids I interact with.  I’ve always been motivated by people who take a humble approach to running and show their results through hard work and honesty.  I’ve also read virtually every book I can find on running, so that has helped shape my perspective on running and coaching.

My favorite place to run in the D.C. area is:  W&OD trail – I’ve logged thousands of miles anywhere from Arlington up through Leesburg on the trail.

My best race was: 2014 Shamrock Marathon – the day the stars finally aligned for me in a marathon.  After spending all winter with my friend Erin training our tails off, we perfected a race strategy, got others on board during the race to work with us, and ultimately led us to both PR, qualify for Boston, and finish within 24s of each other.  Overall, one of my best race experiences.

Pet peeve: When people try to overcomplicate running.  Running doesn’t have to be complex.  There are plenty of ways to train, but most importantly, just have fun and run!

Goals: Keep improving as a runner and coach – I’m in this for the long haul and want to be a runner for life.  Improving means something different with each phase of my life: Sometimes that means to get faster and chase PRs, but other times it might be to improve from where I am and work on things like greater consistency, adding more strength/ancillary work, etc.

Song in your head during a run: I generally don’t listen to music when running, but if I do listen to something, it is usually a podcast to keep my mind busy.  Some of my frequent go to podcasts are: Armchair Expert, Finding Mastery, The Morning Shakeout, and On Coaching.

Have you dealt with a major injury: The only major injury I’ve dealt with was a chipped bone spur off my big toe.  I was out at the track one day doing a hard 800s workout when I suddenly felt a sharp pain in my left big toe.  X-rays later confirmed I had built up some solid bone spurs from all my years playing sports and my big toe pushed off hard enough for the bone spur to chip.  I spent 6 weeks in a boot to let it heal, but my next race back a few months later resulted in a 10k PR, so sometimes injuries and time away from running can light a fire to motivate you to push harder than before.

Running quote: “The distance runner who accepts the past in the person he is and sees the future as a promise rather than a threat is completely and utterly in the present.” – George Sheehan, Running & Being

Why is the D.C. area a great place to be a runner: Because there are endless trails (paved and offroad) that allow most people to start a run from virtually anywhere in the area and connect with other networks of trails to go as far or short as you need.  Socially, there are tons of official and unofficial group runs, so if your schedule allows, you can always find others to run with.  There are also multiple races going on nearly every weekend, which makes it easy to make running work around your life and not the other way around.