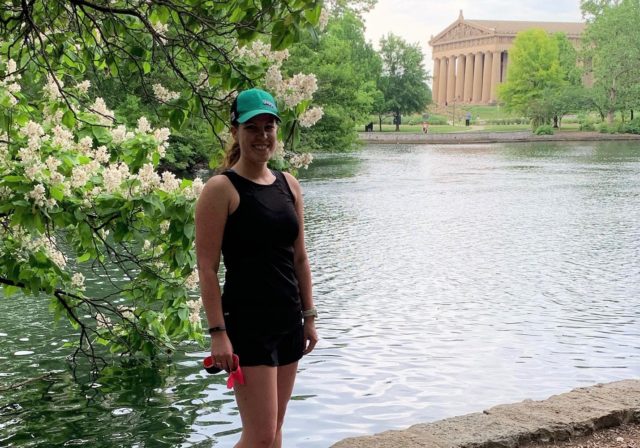 Volunteer roles in the running world: I’ve volunteered at an assortment of local charity road races over the years.

Why you run: I thrive in high-stress environments and when I have a consistent routine, but I’m an introvert. That combination can sometimes be difficult to maintain for any length of time. Running gives me a time-efficient way to take care of my body and mind, process issues without distraction, and grab a few quiet, conversation-less minutes. Running has also changed the way I look at my body. I’ll likely never be fast enough to be competitive in my age group, but running has made me appreciate my body for what it can do, and has made my fitness goals much less about appearance and much more about surviving a couple hours traipsing through the mountains.

When did you get started running: I ran sporadically through college and grad school, but started running more consistently when I moved to Washington from Ireland in 2015. As a relatively uncoordinated 24-year-old whose fitness regimen had previously relied only on farmwork, I started running in a bid to avoid becoming one with my office chair. I registered for my first half marathon that year on a whim.

Have you taken a break from running: Before now, I’ve never taken a break for more than a week or two, usually due to travel. I’m currently mid-break due to an injury but hope to be back on the road soon. I’ve kept up with cycling and rowing, so hopefully the transition back won’t be too terrible.

Training shoe: I picked up a pair of Salomon Sense Rides this summer as an emergency replacement pair after the untimely demise of the shoes I’d planned to wear in a destination race. I’m currently in the market for a new pair(s) of road shoes, but I will likely keep at least one pair of Nikes around.

Coach or training group: I have a few running buddies, but I’ve been hesitant to join a training group. I’ve always been worried I’d be too slow, hold people back, or interrupt someone else’s run. Maybe this is a goal for 2020!

The hardest race you’ve ever run: The 2019 Black Hills 30k, hands down. I’ve run longer courses, and I’ve run more challenging terrain, but running this race (on the heels of another 30k two weeks before) nearly did me in. It was a hot, humid day (I hate the heat), I was injured from the previous race, and generally was not in a frame of mind to push through the pain. It was a teachable moment for me; don’t run through an injury for the sake of an entry fee and free beer at the finish. I’m looking forward to redemption (and another beer) in 2020.

Most adventurous decision you’ve made with your running: Earlier this year, I registered for my first marathon – in Scotland. For years, I had resisted running a marathon, so registering was a big step. I also registered for the MCM in the following weeks, because when I do things, I go overboard. While I had to withdraw and defer because of my current injury, admitting that I want to run a marathon seemed like a big step!

Running mentors: My mom. She lives across the country, but is still my running buddy and inspiration. If she can find the time and energy to run at high altitude and extreme temperatures in a rural area, then I have no excuse!

My favorite place to run in the D.C. area is: The Mall. The loop from the Hill to the Lincoln Memorial is a favorite. It’s flat, fast, and full of reminders of why I live and work in this city.

Favorite local trail: I love the trails out at Rosaryville State Park and at Fountainhead Regional Park. Shoutout to EX2 adventures – they have a few short, fun trail series each year!

My best race was: The 2018 Big Horn Trail 30k in Wyoming. On the best day, it’s a steep, technical course that demands concentration and endurance. In 2018, it was not the mountain’s best day. The front half of the course was sloppy, clay mud. The back half of the course was mostly dry after the sun came out, but the last 5 miles were like running in an oven. For reasons that are still unclear to me, I was able to finish without injury and log a 30k PR. It may not have been easy, it definitely wasn’t fast, but it’s been my favorite race so far.

Favorite local race: You can’t go wrong with any local race that gives you a view of the city’s gems. The Navy-Air Force Half has been a staple for me for the last several years, so I’m hoping it resumes next year. The National Women’s Half this year utilized the same course, and I was able to run it with a friend who was running a half for the first time.

Ideal post-run meal: Tortilla chips, beer and bacon. Not necessarily in that order.

Pet peeve: I grew up in Wyoming where everyone is a neighbor, so if I smile/wave/grimace in your general direction, you’d better reciprocate!

Goals: Most immediately, I want to be patient enough with myself to complete my physical therapy and give my ankle time to heal. When I’m able to resume running, I’ll be training for another series of 30k trail races next summer and a marathon or two. Black Hills, I’m coming for ya.

Your advice for a new runner: Use training guides as guides, not as absolute requirements. Cross training, cycling, and yoga have made bigger changes to my long runs than just adding mileage. Also, run with a friend. A burden shared is a burden halved.

Favorite running book:I don’t know that I can pick a favorite, but I’m currently enjoying Mud, Sweat and Tears – an Irish Women’s Journey of Self-Discovery by Moire O’Sullivan.

Have you dealt with a major injury: At the moment, I’m currently fighting a recurring case of peroneal tendonitis. While a relatively minor injury in the grand scheme of things, it’s taken me out of commission for about two months now.

Running quote: “I often hear someone say ‘I’m not a real runner.’ We are all runners, some just run faster than others. I never met a fake runner.” When asked if I’d be interested in participating in this segment, my first reaction was, “This must mean I’m a real runner!” No matter how many miles I’ve covered, I think I’ll always have a bit of imposter syndrome. I just have to channel that feeling to keep me motivated!

Why is the D.C. area a great place to be a runner: You can run among history. I often find myself paying more attention to the monuments than the miles. Also, everyone runs. There will always be someone who runs faster or longer or exotic races, so you have access to an ever-evolving list of running-related goals.