When Joel Frye tore his achilles tendon in early 2020, he expected a tough recovery and some challenges returning to his passion for running. What he wasn’t expecting was a global pandemic that affected his physical therapy, rehabilitation, work life and attitude toward training.

Frye, a 36-year-old Capitol Heights resident, had an excellent running year in 2019. He achieved his personal best in the Richmond Marathon — 3:29; he was looking forward to doing the Speed Project relay race; he had his sights set on qualifying to run the Boston Marathon. His running group, which had branched off from District Running Collective, had a solid foundation, some good momentum and big goals heading in to 2020.

However, an injury and a year unlike anything he’d ever experienced changed his plans.

It all started when Frye was playing in his recreational basketball league in February 2020. He was recovering from plantar fasciitis at the time, and was working with his physical therapist Sarah Weimer of Washington Wellness Physical Therapy and SportsCare to treat it.

During the basketball game, Frye ran down the court and changed directions.

“When I pushed off, I heard ‘PFFFFF’ — like a loud puff sound. I thought something fell from the ceiling. I asked my teammates if they heard anything, and when I took the next step it felt like the floor dropped out from underneath me,” Frye said. He texted Weimer right away from the bench, who told him to go to urgent care. Fresh in his mind was another basketball injury — a meniscus tear that happened in the same league in 2014.

Frye found out he had a torn achilles and a full rupture. The news was bad. But it got worse.

Before his surgery, he got the OK from his medical team to travel to his grandmother’s 90th birthday party. He drove part of the way, during which he said he didn’t elevate his leg or stop as much as he should have. When he stopped for gas, he said he felt like his calf was bruised, but didn’t think much of it — chalking it up to the constricting surgical boot.

When he felt off the next few days he contacted his doctors, who had him come in for an ultrasound. It confirmed he had a blood clot. The need for surgery was immediate.

His surgery was moved up to Feb. 20 — when the severity of COVID-19 was not fully felt locally. The first U.S. case occurred in January, and the global pandemic was declared in early March.

The surgery went well, and his initial recovery began. He went back to his job as a physical education teacher at KIPP DC, a public charter school. The school closed as a COVID precaution the next day.

“Thankfully I got my surgery before they shut a lot of stuff down,” Frye said. 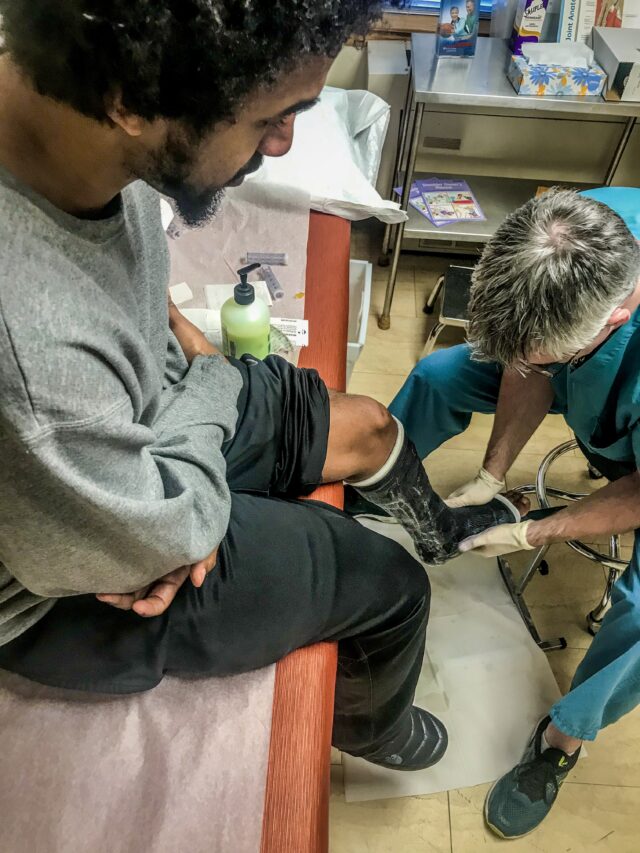 While Frye acknowledges the terrible toll coronavirus has taken globally — in lives, employment, mental health and more — he admits it was a “blessing in disguise both mentally and for recovery.”

“I’m a PE teacher so I’m active, but if I were at work, I would have been in a scooter or in the [surgical] boot. With COVID, being able to teach at home … helped me get the rest I needed and keep my foot propped up,” said Frye who taught virtually and used online resources for help with his lessons.

“And with the mental part — I had just gotten into the New York Marathon and the New York City Half Marathon, and I was going to do the Speed Project … I had all of these races I was looking forward to and all of these goals for 2020, but then COVID shut all of it down. I hated it for everyone else, but I didn’t have FOMO. If I’m not racing, then nobody is racing. It felt like the world was revolving around me,” he said.

COVID allowed him to take time to focus on his recovery, he said. He again turned to his physical therapist, Weimer at Washington Wellness, to help him through this challenging time.

Since the office was small, there were limits to the amount of people who could enter because of COVID restrictions. So when Frye was in the office, he had 100 percent of Weimer’s attention, he said.

Meanwhile, coronavirus restrictions on gyms and athletic facilities forced Weimer to change the advice she gives her patients.

“Typically I tell my patients to go to the gym and do their exercises [outside of our sessions] — but I couldn’t do that,” said Weimer, who has been a physical therapist for 13 years.

This led to a unique path for Frye’s recovery.

Frye had a very restrictive insurance plan that truncated his physical therapy appointments to 60 consecutive days of treatment. At the end of those roughly two months, Weimer said she wasn’t done with him — so she took him on as her first one-on-one patient outside of Washington Wellness. She formed her own personal business, DC Physical Therapy and Fitness.

“My side business developed out of this … the gyms were closed and I had people who were wondering what to do as they recovered from injuries. So thanks, COVID. That’s one good thing that came out of this year,” Weimer said.

Achilles tendon tears can have a long road to recovery, Weimer said, as patients have to relearn how to do things that were once simple such as walking or using stairs. It usually takes about a year to fully recover and regain the muscle girth and strength lost after surgery, she said.

Weimer met Frye at D.C.’s National Art Gallery to do socially distanced outdoor workouts including stretches and plyometrics. Frye wanted to get back to running, but Weimer said she knew he needed to build up his strength first.

“You have to do something to keep [athletes] engaged through rehab. You have to keep them motivated and keep the end goal in mind,” Weimer said.

Soon, Frye’s friends wanted to get in on the action and get some training from Weimer too. More and more people joined Weimer’s sessions.

“We were spaced out with masks and we made this little community,” Frye said. “People were dying for some kind of interaction. A whole community developed. We are still meeting up today. That really kickstarted the recovery process.”

For Weimer, the transition from therapist to coach felt natural.

“I like it because it is different than the day-to-day physical therapy setting. I go into this coaching role with athletes — they are building their bodies and in active training. They have a goal and I’m motivating them to get there,” she said.

Frye is back to running more regularly now thanks to Weimer’s guidance. He ran his first race since the injury in March — the Richmond Half Marathon — and he logged more than 150 miles in March alone.

He’s also started running local trails with a group of about 10-12 people every Saturday. It’s a new adventure and an excellent support group in a very weird year.

“It’s amazing to me how these communities develop … especially during COVID when people are seeking interactions that are safe. It’s enhanced these fitness groups. And we have our own little community. It’s my favorite part of the week, and it’s been nice not going through this process by myself,” Frye said.

In 2021, Frye said he hopes to get a PR at the Richmond Half Marathon. He also wants to integrate more swimming and biking into his routine in hopes of tackling his first triathlon.

Frye says this process has taught him about goal setting, strength training and the value of community. It also taught him about one activity that may be eliminated from his extracurricular activities: basketball.

“I finally have [learned my lesson]. If I really want to meet these running goals, I’m going to have to fall back on basketball a little bit,” he said. “You think you can do the things you used to do but your body says otherwise.”