Kenyan Edwin Kimutai left the American field behind to fend for itself at the rescheduled Credit Union Cherry Blossom Ten Mile, pulling away in the third mile and cruising to a 32-second win in 45:45.

Behind him, Abbabiya Simbassa and Augustus Maiyo battled for the U.S. 10 mile championship, with Simbassa gapping Maiyo, the 2012 Marine Corps Marathon champion, by five seconds, finishing second overall in 46:18.

“I felt good,” said Kimutai, 28, who has a 1:00:57 half marathon PR. “The course was good. It was flat, and I like racing on the roads. I was good the whole time. I normally run the marathon but wanted to run some speed. I’m running the Paris Marathon, so it was time for me to come see if my speed was good.”

It was indeed good.

END_OF_DOCUMENT_TOKEN_TO_BE_REPLACED

5k out and back in Towpath in DC starting at Fletchers Cove. Virtual and in-person options. Free parking. Raises money for a great DC-based organization, Run Hope Work. $30, but no in-person race day registration.

Nell Rojas (52:13) held off Jenny Simpson (52:16) in a kick to the finish between the two Boulder, Colo. residents racing their first Credit Union Cherry Blossom Ten Mile Run, which doubled as the USATF 10 Mile Championships. Both athletes competed in the U.S. Olympic Track and Field Trials in June, as did Sara Hall of Flagstaff, Ariz. who finished fourth for American women today in 52:43. Kenya’s Antonina Kwambai (52:23) and Caroline Rotich (52:25) placed third and fourth overall, respectively.

“This isn’t a permanent career pivot, I’m just taking advantage of this little window of freedom I’ve had to train for something different and fun,” she wrote on Instagram in late August.

The biggest difference between her 1500m specialty on the track and ten miles on the road? “You have a lot of time to think” she told reporters after the finish. “In a 1500, by the time it gets hard you’re almost done.” She said she still had 30 minutes to go when the ten miler started to feel hard.

END_OF_DOCUMENT_TOKEN_TO_BE_REPLACED

Apparently finishing second at the state meet at the end of an abbreviated freshman season didn’t give Sailor Eastman much confidence.

It wasn’t until she was battling Olympic Trials 800 meter runner Juliette Whittaker in the last mile of the Oatlands Invitational that she realized she belonged in the race.

“I kept thinking they were all going to catch me and outkick me,” Eastman said. “I just decided to fake it until I make it.”

END_OF_DOCUMENT_TOKEN_TO_BE_REPLACED 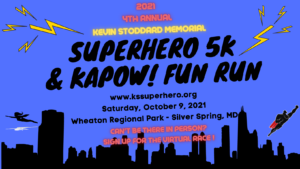 Join us the morning of Saturday, October 9, 2021 in Silver Spring, MD for a race in memory of Kevin Stoddard. All proceeds go directly to the SuperHERO Foundation in Kevin’s honor to help others fighting a superheroic battle against

There’s no date to be found. Just recognition that it’s the race’s 48th running.

“We were looking for ways that we could avoid waste if the race got canceled,” said race director Phil Stewart. “The medals are dateless, too, but we’re including a little plastic strip you can add that says Sept. 12, 2021.”

Up until a few weeks ago, Stewart was still a little unsure the race would happen as the Delta variant’s progress soured national optimism for the COVID-19 pandemic to wane. But with a few alterations, Cherry Blossom will serve as “opening day” for the fall road racing season this Sunday.

END_OF_DOCUMENT_TOKEN_TO_BE_REPLACED 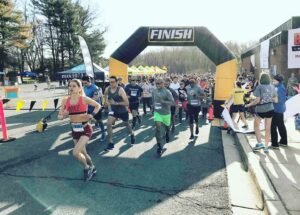 In its 10th year of an in-person run, Ben’s Run benefits kids with cancer at Children’s National where Ben was treated for leukemia before he passed away. Goal is to raise $1 million after 10 years. About 1,000 runners and

You may recognize Courtney Carter. Perhaps you’ve seen her running around the Anacostia Trail or the National Mall — two of her favorite local running routes; you may know her from Instagram, where her handle @eatprayrundc has more than 11,500 followers; or you may know her through her work with diversity, equity and inclusion and her posts about it on sites like Women’s Running, Oiselle’s blog or her own website.

She’s using her social media presence to show runners and people of color that they can accomplish amazing things. And Carter, who lives in D.C.’s Trinidad neighborhood, also wants the D.C.-area running community to do better when it comes to diversity, equity and inclusion.

END_OF_DOCUMENT_TOKEN_TO_BE_REPLACED

It may not be the Appalachian Trail, but to some local runners, traveling the length of the W&OD Trail is a goal worth pursuing.

The Washington and Old Dominion Trail stretches 45 miles through Northern Virginia between Purcellville and Shirlington. The asphalt path is beloved by cyclists and runners alike, but running the entire trail in one day is an uncommon feat.